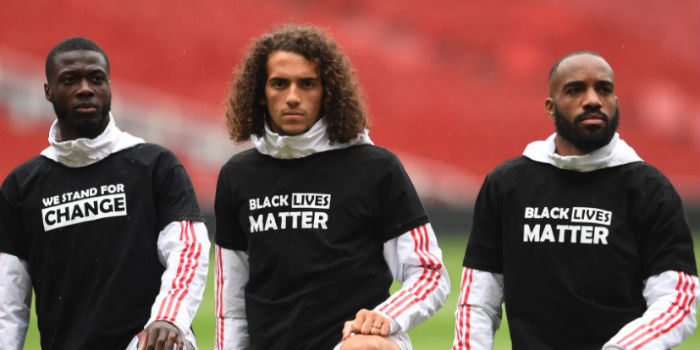 Arsenal were defeated 3-2 by Brentford at the Emirates this afternoon as Mikel Arteta’s first team squad continued their preparations for next week’s Premier League return.

Joe Willock put the Gunners ahead just before the break but the Bees hit back on the hour mark through Tariq Fosu. Despite Alex Lacazette putting us back in front, the visitors sealed victory thanks to further strikes by Halil Dervisoglu and Shandon Baptiste.

Ahead of kick off, the Gunners’ players and coaching staff took a knee in a show of solidarity with the Black Lives Matter movement. It is expected they could do the same next Wednesday.

Judging by the pictures available on Getty Images, the players went on to hold an additional training session after the game.

This friendly comes five days after we beat Charlton 6-0 at the Emirates. It remains to be seen whether we squeeze in another game in the next few days.

We head to the Etihad in a week as we look to continue an unbeaten run in the Premier League that stretches back to December. ?

Did Owen Coyle finally get his dream move?

The Voice of the Noise
Reply to  Winterburnsrightwanf

Lacazette lost the ball in our own half for them to score the equaliser as per the match report
As per usual.

Nketiah disappeared after the first half ?

Because he got subbed out

seems the joke missed the mark.

I gotta get my act together ??‍♂️

Important question. My first thought was that he is leaving in the transfer window and they are adjusting to life without him. There was no injury announcement.

He played the previous friendly just a few days ago, I believe. Bound to be a few players needing care getting back to match fit after a layoff like this.

Did Nelson get injured? Why did he get subbed on @ 60 minutes and not complete the match?

So that other players could get game time perhaps? Like the other 5 guys subbed on 60 mins. Kinda standard in games like this.

Sokratis twice? Well if his wife played no wonder we conceded 2 more.

Largely this was Holding not tight enough.

Again people making excuses and preferring to blame other players this time Sokratis.

Third goal was AMN issue which is why it is a bit of a crap shoot with him in midfield. prefer Guendouzi or Willock.

Too many people unable to see things objectively as per usual.

Also, seen the highlights, what’s interesting is that there were extra lines drawn on the pitch, dividing the pitch into 3 parts: middle and the flanks.

Two of the goals were conceded after a turnover deep into our half. Now where have I seen that…

We concede in a friendly after changing most of the line up at half time and then twice more after making further changes on the 60th minute.

It’s not the end of the world.

There’s this thing called sarcasm, although it’s not always obvious.

But this time it was 😉

They beat us after we made such a great point. Racists

That’s in very poor taste. I doubt the players would appreciate it.

AMN really needs to step up now that he is being played in his “preferred position”. He has this lazy and lack of focus mien that I keep noticing anytime I see him play.

In all fairness, he’s a young player who’s been educated as a midfielder, but has largely been playing right back and left back, It should be no surprise his confidence is shot, particularly playing in a defence as erratic as ours.

Maybe a loan would do him some good, he’s a brilliant athlete, and I’m not sure at 22 we should write him off just yet.

Right side of a midfield three seems fitting for him good engine , can cross , beat a man , tackle , cover bellerin . Like xhaka did for the left back . You may have to lose number ten tho. No ozil ?!!?
To play a strict 433
I would rather have another tackler in midfield than a number ten for away games , look at his stats for season , tackles are high for him .
Big game player He scored at Anfield. Won youth world cup

I said same thing about him few months ago. He was always like “I play out of position, why are you expecting all that from me”.
Just listened to the interview with Huddart who has been playing in National. AMN should realize how lucky he was playing out of position and not been sold.

Wouldn’t get too worried about a friendly defeat in my opinion. Obviously the goals conceded are a bit worrying but mainly just getting the players fitness levels sharp before City game. Remember us thumping PSG and beating Bayern in a friendly under Emery and look how that turned out

Valid point; but on the other hand, at least we were capable of beating opposition of that calibre, even if it was a friendly. Now, struggling against Brentford in the way that we did today, hardly inspires confidence..

I just came for the comments…

It’s all good. This is just a ploy to lull City into a false sense of security. Come Wednesday… BAM!!

I couldn’t care less about losing a friendly behind closed doors. I do care that the club I`ve been following since 1957 has decided that its a good thing to support a black supremacist group and our players are eulogising a violent criminal junkie who used to roam the streets and threaten to shoot pregnant women in the belly. Absolutely disgraceful.

To be clear are criticising them for supporting the black lives matter protests?

You stand in the minority my friend, you piece of shit.. i know you are scared because change is finally here. Drown yourself in your conspiracies if you will but the world will no longer tolerate your kind.

Wow, your lack of understanding is breathtaking

Supporting summary executions in the street for petty crime is a brave take old boy.

You, on the other hand, think it’s a good thing to support murder. Disgrace is an understatement in describing your hateful sentiments.

If this is about murder,why don’t we start eulogising about all the abortions happening across all races?

But I still believe that in both cases life is taken away regardless,innocent life for that matter.

But I believe that comparing a woman’s right to choose whether or not she wants to be pregnant with the act of murder is beyond crass.

I admit that my comparison is negligent,and by the way i am against any form of racism,especially being black and from South Africa.I just question the motives of some of the modern movements we have,if they really serve protect in reality.I also believe that abortion is wrong because life is conceived in the womb,but i will leave it at that as this is a sports blog,which i enjoy very much.

You’re perfectly entitled to your view on abortion – which obviously I disagree with, but I just think the comparison with murder is wrong and unhelpful.

Anyway, thanks for the conversation.

My mrs is vegan and disbelieves in the killing of anything (except mosquitos), but still agrees with arseblog on this one.

its a complex issue.

I’m both vegan and support abortion rights – the point I was trying to make (maybe a bit unclearly) is that if Nzini’s position is that all life is sacred and shouldn’t be harmed including fetal blobs (I’ve just assumed it’s religious reasons) then I hope that person sticks to that view consistently and doesn’t believe there is such a thing as just war, doesn’t support capital punishment and doesn’t support the dairy/meat industry etc

Aaaand… so it begins.

Who is this so called violent criminal junkie?

I think he mean Malcolm X ?

You appear to be conflating supremacy and equality, give those definitions a Google. Also, as others have pointed out, there is no justification for murdering a man in the street regardless of what may or may not be true about his past. Finally, I don’t want to speak for the players but I imagine they were taking the knee for the many black people who have been unjustly murdered across the globe for centuries and not just George Floyd. You should do some reading about that too, let me know if you would like me to provide you with some… Read more »

And – it would seem – a growing majority worldwide

Yes, you are indeed absolutely disgraceful. Good thing you can hide behind your keyboard…

Your characterization of a fellow human being deserves to be challenged   Wikipedia https://en.wikipedia.org/wiki/George_Floyd   Daily Mail https://www.dailymail.co.uk/news/article-8366533/George-Floyd-moved-Minneapolis-start-new-life-released-prison-Texas.html   His last offense had been in 2007 – 13 years previously. The officers that committed or abetted this murder would not have known of his previous convictions. It would appear he had turned his life around and was advocating against gun crime.   Just for comparisons sake we could look at the life of our current Prime Minister and wonder about his involvement in planning to have a journalist beaten up, that took Class A drugs and smashed up restaurants….how would… Read more »

The protests we are seeing are now so broad-based and multicultural that it is disingenous to term them ‘group’-driven. Way more disingenous is your deliberate esclation of this vast cross-section of global society as ‘supremacist’? They simply want Black Americans to be treated with a modicum of respect – as equal to the rest of their less swarthy countrymen, no more than that.
I won’t comment on your tasteless judging of George Floyd’s past – it speaks for it’s reprehensible self.

Ah I prefer this angle, much easier to watch (as compared to the previous match’s cam angle)

Good to see Niles getting his chance in midfield.

So we made a whole raft of changes at 60 mins and they score. Ok not too bad.

But the two goals at the end… Hmm

I wonder where in midfield Saka was playing in the first half?

AMN is back from the dead!

All thanks to our state of the art necromancing facilities!

All it required was the live sacrifice of Cédric Soares…

Guys and Dolls.. its training, who gives a twat about the result. The lads are saving them selves gettin ready for three weeks of cup-like footie like we´ve never seen before. Exitement is what should muster.

Mustafi getting 90mins to play with all the other cbs as if he’s now the main fulcrum is a bit of a worry. Even in the official highlight reel he loses the ball about 5 times.

I mean its a practise game so can’t read too much into it but we should still be rolling over Brentford.   1)Both Willock and Lacazette continue goal scoring form match before.   2)Good to see BOTH Tierney and Kolasinac back (as well as Bellerin on corresponding flank) As much as Saka has deputised extremely well, we have been lacking in fullbacks/wingbacks.   3)Nelson and Guendouzi also playing active role and may be critical for us. Personally feel Arteta has not used Guendouzi enough albeit can understand he is more concern with concrete results in which case Ceballos and Granit… Read more »