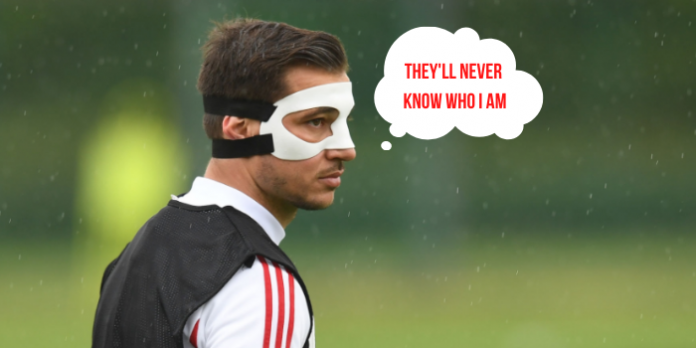 A couple of weeks ago, the Arsenal treatment room was a quiet place. Now Calum Chambers has plenty of company.

Ahead of Saturday’s trip to Brighton, the Gunners medical team have confirmed that Cedric Soares, Sokratis and Granit Xhaka are all sidelined for two weeks with a smashed nose, thigh strain and sprained ankle respectively.

They’ve also revealed long-term absentee Lucas Torreira won’t resume training for up to three weeks and Pablo Mari, as previously reported, has suffered ‘a significant injury’ that means he’ll miss the remaining games of the season.

To be fair, Torreira, who fractured his ankle in March, would have missed the final 10 games anyway had Covid-19 not played havoc with the original schedule so we can’t complain too much about his situation.

It is very clear that with David Luiz suspended, we’re definitely short of options in the centre of defence. As things stand, Rob Holding, who didn’t make Wednesday’s 20-man squad, will have to partner Shkodran Mustafi for the next couple of games. If either of them gets injured, we may have to ask Kieran Tierney to fill in.

You have to wonder how Cedric Soares is feeling right now. Injured when he signed in January, he got fit just in time for the lockdown and on the resumption of training (as per the Athletic) suffered a training collision with Bukayo Saka that left him requiring surgery and wearing a mask. Given his contract ends in 11 days, being out for two weeks is far from ideal. We may never see him in an Arsenal shirt.

That’s 5,000 season tickets for the cost of homing Soares for 6 months. You have to wonder if the Kia thing and agents in general is working out.

It Is What It Is
Reply to  Teakster

Fully agreed. Stan and Josh are not very hands on. I assume they rely heavily on expert advise and opinion, and Raul’s dumbfounding actions (high wages and agent fees for players on loan or short term deals) makes me think we’re being taken for mugs. Seems like our owners and management don’t have the clubs interest at heart. As much as I like Ceballos, I’d imagine he’s in the £50m club. And it’s the type of deal I’m scared Raul would make. Outlay on a number of our recent transfers is ridiculous. Better stop. Nope. I say probe the shyster.… Read more »

Don’t see it going on for long. We’re often feeling fucked over atm and I expect Mikel will exert more control over the quality of tools he’s given

Another highly enjoyable episode of “that’s my arsenal!”

I am frustrated on the Torreira setback, I think Holding needs to establish his place in first team from this point onwards knowing Salina will be coming in. He needs to remember how good he was against that Chelsea team in FA Cup final. As for the rest of the injuries, I’m sure no one is too fussed given this is a throwaway season anyway. Most of us are just interested in what Arteta is going to make of the transfer market give the circumstances. Far from ideal for Arteta in his first season, shit hit the fan, but before… Read more »

There is a mystery for me with this club: how can they sign in january loanees who are injured. Mystery… Then we pay their loan, we offer them (or their initial club) our structures, medical staff… to get fit again and hop, they leave back home. Suarez, Soarez, Mari… Oh, all Spanish players.

Just to get the facts right, Soares is Portuguese. However the Mari injury could not have been legislated for and neither the new one of Soares

Lol naked cygan not leaving Martin on any thread ?

As a supporter for over 65 years and a season ticket holder for over 40 of them, I think I have watched a fair amount of matches. However I deny saying that David Luiz has never put a foot wrong or that with Arsenal he has been a great player. I merely stated that since Arteta took over he has improved. However I agree he had a nightmare on Wednesday but frankly with the exception of Leno I cannot think of any player who covered themselves with glory. Whoever suggested taking a plane journey was barmy. That certainly couldn’t have… Read more »

Martin, glad that you finally admit things are bad. Things have been bad for a while. Some people just decide to ignore it. As a 40 year season ticket holder, I would love to know what you think of the David Luiz performance against Chelsea in January when Arteta was the manager. Surely you watched that game? Does it remind you of any other games? Love to know what you think….???

I really like the look of Mari, but he has player so little football in his career that it is quite a risk now to sign him full-time. It would have to be a realistic salary, but it is hard to trust those leading to be sensible with money.

Conspiracy theory.
Kim Kallstrom. Cedric Soares.
I mean, you never see them in the same place at the same time, do you?
I think we should be told.

Now THIS is the sort of creating thinking we need more of around here.

How did noone not see this before?!?!?

We are truly the most laughable club in the Universe

We just haven’t got enough high quality players. Compare our team to any of the top 6- not enough skill and team work . It’s not getting any better

Forgot to say how long Ozil will be out with bruised ego.

Soares, our very own Carlos Kaiser 🙂

Arsenal FC – the most poorly managed club in the English league.
What a complete joke they have become…

Bench the old veterans and play the kids. Forget about Europe for a year and try to find any sort of solution in midfield/defence.

Please don’t resign Luiz. Kola or Tierney or one of the young lads has to be better than Sideshow Bob.

Apparently Medley is in the squad for tomorrow. He’s left-footed so more of a natural replacement for the Mari/Luiz slot – though the idea that he and Mustafi are now our best bet at CB is terrifying. Would be harsh on Holding if he still can’t a game though.

FWIW Medley looks a bit in the Mertesacker mould (tall and slow), though I don’t know if he reads the game particularly well being so inexperienced.

I Don’t imagine there’s so little competition that our first in line to step up in CB is shit. I’m hopeful it’s just about papering his remainder cracks and we’ll have a useful player

Kolasanlc could play CB. Arteta may have pickedup ideas from pep. And play midfielder and FB at centre back.

How did we end up transfers like these is beyond me. Season aft season.

Soares and Mari join Arsenal, immediately get injured, just like Tierney did. You couldn’t write this stuff if you tried.

So what’s the preferred result for today’s match?? Do we hope for a draw, or dare I say it spuds win?

Ricky no Arsenal fan in their right mind would want spurs to win a raffle let alone a football match. Draw was perfect result now we have to beat Brighton.

Fitness resilience still an issue it seems.   …two ankles over less than 45 minutes and Torreira as well…   Sokratis also out.   I guess we will be Mustafi-Holding at the back …   Midfield prob Ceballos (Felt he was combative and had good moments in the last match), Guendouzi. Hope toi see Ozil play some part maybe not for 90 so Willock has also good utility with his energy levels but the German can help unlock things for us at very least for one half of the match. It has to be stressed to him its not how… Read more »