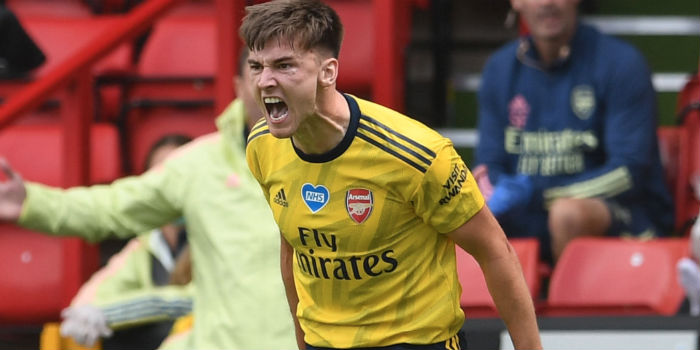 Mikel Arteta says he’s “delighted” to have Kieran Tierney at his disposal and predicted the Scot will continue to improve having shaken off his injury problems.

After more than six months without a game, Tierney has demonstrated his versatility in the last 12 days featuring as a centre-back, left-back and wing-back across four appearances.

After going off against Southampton with cramp, the 23-year-old completed the full 90 minutes of Sunday’s 2-1 win over Sheffield United and cut an energetic presence, constantly overlapping to provide a dangerous outlet.

After watching his side progress to the FA Cup semi-final, the boss was asked about our summer signing. Arteta’s praise was fulsome.

“He’s been training incredibly hard through [the] COVID-19 [lockdown],” said the boss.

“It’s been a tough moment for him in the last six or seven months and to move here from a different city, a different football club.

“He is a kid with an incredible attitude and he is so willing to learn and to put in everything he has. He has a massive heart and I am delighted to have him in the team.

The boss also liked the spirit he saw from his players who progressed to Wembley courtesy of Dani Ceballos’ stoppage time strike. The Spaniard saved Arsenal’s blushes after another defensive calamity had allowed David McGoldrick to level things with four minutes remaining.

Asked what he liked most about the performance, the boss said: “I think the attitude and the commitment of every single player that was involved in the game or that was waiting for his opportunity.

“There were really good moments where we played and we did the things I asked them to do and the way we dealt with Sheffield United’s play.

“I knew there were some phases that we were going to suffer and how we dealt with that… I am really, really pleased.”

He rarely looses possession, never really exposed in defence, great crossing ability (we need to a gameplay where we get more of it), let’s his game do the talking and always has his shirt tucked in. What more do we need

“Shirt tucked in” is part of his most important attribute: the no nonsense, all in attitude. He’s a model professional , very passionate and a born leader, can never have enough of those characters. They might lose the game but they’ll never back out of a fight. If you want to break the Captain’s curse KT is the answer. Give him a season or two he’ll be there.

100% agree. Really appreciate you leading with the point his shirt tucked in. I wonder if the article pic is when he yelled at the ref for awarding a foul to sheff u after his tackle-pass in the 2nd second half. There are some great young characters in our squad…… Eddie, Joe, Bukayo and kieran. Love these guys in my team.

Defence felt very secure with our five at the back. Tierney was MOTM for me. If Niles can improve his concentration with his passing he could have a big future with in midfield, love seeing him drive at the opposition.

I like this kid a lot. It’s early days but I can see him being our starting LB for the next five+ years.

Loved when KT and a SHU player started heading for a 50/50 ball on the right sideline. At the last second the SHU player pulled out. Good thing for him KT blasted the ball into Row Z. Can you remember an opposition player pulling out of a 50/50 against us since the glory days of our Coq?

Tierney was excellent throughout the game. He’s solid in defence, seems to have a good grounded attitude and has a good delivery. I thought Ceballos was decent when he came in today. Added a bit of shithousery as well as some technical ability. I don’t think he’s as bad as blogs seems to think but I can understand why we are a little reluctant to keep him.

The Arsenal
Reply to  Chippy Brady

Artetas Assistant
Reply to  The Arsenal

He’s been at Arsenal so long he’s become average, which might not be the worst thing if Mikel decides to price him. He was best starlet in Spain not long ago

I think he’s quality, just not really had a proper run and came in when Emery was on the way out and the squad was in a mess

I have a friend who is a big Celtic supporter who told me that I would love watching Tierney play for Arsenal. Now that he appears fully healthy and integrated into the team, I am totally onboard with that assessment.

I wouldn’t be surprised if he gets the captains armband in a few years.

I think we have a good lad here. Anyone turning up with a Tesco bag for his kit really sums him up. I couldn’t see him shouting how much the other players are earning just lets his football do the talking. Now keep him fit.

Thought it would have been better had Tierney been played in back 3 and Kolasinac left to bully higher up.

As is Arteta prob concern about physicality given their number 9 who was a menace all game.

But Tierney/ Kolasinac could be a useful partnership.

Kola’s place a problem now if KT is fit and firing. Since he’s not a great LB, we don’t play with 3 at the back and Saka is way better on the left. Kola looks leaner and faster than he did when he came to us but he doesn’t have the technical ability…

Kolasinac definitely a physical presence in attack, but Tierney is more varied: better at “traditional” cross, more likely to get behind opposition back four, and, of course, he is the future at that position and giving him as much Premier League experience there as possible makes sense.

He unleashed a shot which could have resulted in a goal.We need more guys like like him as well as towering beasts like PV 4.Arsenal have been bullied all over the pitch thanks to the lack of monsters .When Petit and PV4 were around,Arsenal were awesome .
I n the Brighton game ,Arsenal were physically 2nd best and shd have at least
a penalty giving the lie to the SU manager’s claims of gunners diving.

I seem to remember earlier in the season, a cup game there was some dodgy foul on martinelli and Tierney was right up in the guy’s face, that’s when I knew there was something about him

We have had such players (and moments) in the recent past (rem when Walcott tried to head-shove Maguire once) but alas they haven’t backed it up with their play. KT looks like he’ll out play and out kick most PL right wingers on his day.