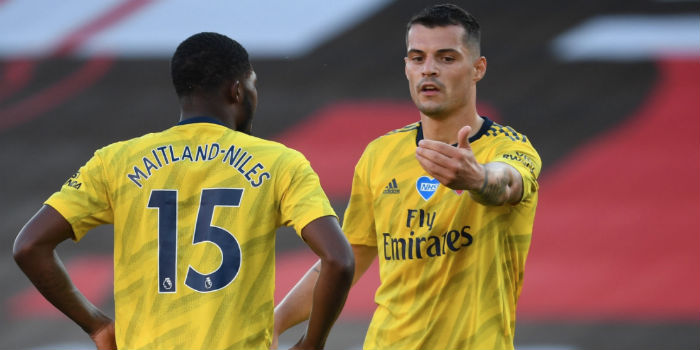 Mikel Arteta was quick to praise Granit Xhaka’s professionalism after the Swiss delivered a solid performance on his return to Arsenal’s starting lineup against Southampton.

Having injured his ankle at the Etihad last week, it looked like the Gunners would be without the midfielder for a couple of weeks.

Following a quicker than expected recovery, he was selected in favour of Matteo Guendouzi at St Mary’s and brought more balance to our play as we secured a 2-0 win; our first away from home in the Premier League since Arteta took over in December.

“He’s a big presence,” said Arteta when asked in his post-game press conference what the Swiss brings to his team. “He’s someone who doesn’t hide.

“He has very clear principles and values, and he puts that on the pitch every time he’s there. His commitment is excellent and he’s a really good example for the rest.

“But I don’t like to focus on any individual. Today the starters, the subs and the players that I didn’t use all had the right energy, with the right commitment and the right intention every time they jumped into the pitch.”

While three points and a clean sheet on the road are very welcome, it’s clear the boss is not getting carried away. Currently ninth in the table, it’s looking increasingly likely that we’ll have to settle for Europa League football, even if we string a run of results together in the coming weeks.

For the time being, Arteta wants his team to maintain its focus on things within their control.

“I don’t know,” he said when asked if we can qualify for Europe. “I said that I don’t want to talk about what’s going to happen on the table, but I’m concerned about what we do every day in training and how we prepare and compete in the games.

“We had two very different games against City and Brighton. Against City we lost two players in 20 minutes and we played 45 minutes with 10 men, and we gave them two goals. Against Brighton we had total control of the game and we threw the game away in seven minutes.

Nelson: It’s a big achievement for us

Being difficult to beat is a reasonable starting point for us at the moment.

And I think Xhaka’s presence (his sporadic mental lapses aside) brings a measure of structure and calm to the team that we lack without him.

The state we’re in at the moment, being difficult to beat would be a gift from the Gods. I’ll gladly take that over pretty football that ultimately ends in three more dropped points. Stopping the rot and building from the back should be priority number one. Keep it tight, give nothing away and take your chances when they present themselves. It’s not Wengerball, but neither are we in the Champions League. Clean sheets are the way forward out of this mess.

Xhaka for captain again once Auba leaves. It’s the only logical decision. We’re a different side when he’s in the team and he is universally respected by everyone at the club.

We all make mistakes and it was a ropey time for the squad as a whole, however, he’s lucky to be wearing the shirt at all the way he behaved towards the loyal support. He’s a long long way from wearing the armband and personally he shouldn’t ever again. It’s just not the Arsenal way of behaving.

Dude come off it. He made a mistake. Were Adams or Vieira ever booed by their own fans at home? The fans who did that need to have a long hard look in the mirror.   I’ll leave you with Roy Keane’s famous description of modern fans:   “There were one or two stray passes and they were getting on players’ backs. It’s out of order. I don’t think some of them can even spell football, let alone understand it. “Away from home our fans are fantastic. But at home they have a few drinks and probably the prawn sandwiches,… Read more »

Yup. He’s the smartest midfielder we have besides Ozil (but the cons > the pros) and the bar isn’t the highest here.   I’ve been saying this for a while, the midfield imbalance is the reason our defense is exposed time and time again. We have an average defense but they are always up against a 3v3/2v2 situation. A simple ball or direct running always seems to bypass the whole midfield. Xhaka has decent positioning to protect our backline and also a good passing range to move play forward.   The rest of our midfielders doesn’t seem to have a… Read more »

When Xhaka arrived at Arsenal, we were competing in CL. Then Wenger, Emery, Ljunberg, Arteta have played him again and again and again without interruption. Now we’re not even in EL. I don’t blame solely Xhaka, but he’s played a tremendous number of games without long injuries keeping him out of the squad. It’s worth considering that we may be content with a mediocre midfielder.

Yup. It’s not completely on him, obviously, but at the same time, I get the feeling that if he were playing for a less well-supported mediocre English club, he wouldn’t necessarily be someone top-4 teams would trip over each other to sign.

They all liked him because he’s a personality and a leader in a team that’s been lacking leaders for a long time. It’s the same reason we’ve given Luiz an extension and in both cases i think they are selected as much and if not more so for their personalities on and off the pitch over their footballing contribution.

The optimist with little hope
Reply to  Alex

Yh that’s fair & his implosion on the pitch last year didn’t help, but we are where we are & we’re better with him in the side than the other options we currently have.
Hopefully we can get someone to bolster the midfield defensively & help Torreira out & begin to build on that. At the moment Guendouzi fills me with the rage that Xhaka used to fill me will. At least Xhaka fights for his other players on the pitch & has respect from them. We need a few more with that team spirit to help these kids develop.

There’s a lot more to a successful team than just one player. United won leagues playing the likes of Fletcher, Park and Anderson in midfield. A great defense was at the base of it all complimented by Ronaldo and Rooney.. not to mention Fergie, who had a cheat code to winning PL.

I see the argument, since Xhaka is one of the common denominators during a period of decline, but it is notable he’s always been one of the first names on the sheet for Late Wenger, Emery and Arteta.   But where Wenger and Emery tried to play him as a traditional swashbuckling DM and it failed massively (and I agree did major damage in those years), Arteta has had him playing as the kind of deep-lying CM that covers the back four by positioning rather than tackling and links the midfield by distribution rather than harrying. In other words exactly… Read more »

He is the best of a bad bunch in midfield. I wish we had sacrificed a few players to bring one good midfielder in instead of signing them all up again.

I always thought people who support Arsenal were people who understand football, but the amount of people who can’t see the mediocrity of Xhaka has made me completely reconsider that sentiment.

Hey Donald. Some may realise that Wenger, Emery and Ljungberg didn’t understand make the right use of Xhaka. Arteta does. But whats the point of making that point when you are a Donald? You are already presenting the “proof“ that less testing will give fever covid 19 cases. And that mindset will confirm your bias.

I feel like with Xhaka, he needs a box to box midfielder next to him. He is good but has a limited skill set. Something like a Petit(xhaka) and a Vieira.   All our other midfielders don’t really compliment each other which is why it’s so disjointed in both attack and defence. None of them are mobile and powerful.   Which I think is why we either get our midfield too far forward which leaves us exposed at the back or our midfield is too deep and can’t support our front line because the gap between midfield and attack is… Read more »

Did you know from 2000-2009 US per capita chicken consumption correlates almost perfectly with US oil imports from Norway?

Correlation isn’t causation. Xhaka has been one of the best players in a mediocre squad. Hanging the EL millstone around his neck is silliness.

I love this quote from Arteta ‘are at the moment average’. I love he’s realism.

I mean, oscillating between 11th and 9th in the league is pretty much the definition of average.

OT, but feel a bit disappointed our club didn’t take a minute to congratulate Liverpool on their success, which I believe is the right thing to do at sports. Where’s the class?

Could be as well ) just my opinion

Why would we need to? It has no relevance to us.

Congratulations on becoming the new Leicester

Average player plays for midtable team. We need much better players in these key positions. Wenger signing xhaka and mustafi was the begining of the end for him he knew we needed a DM and a CB and spent big. 2 of the worst signings i can remember. and 4 years later they are still here stinking the place out!

Arteta should train Xhaka magic long shot always..it worth it to trigger the enemies defence rather than always play thru both wings

Xhaka will never be a MF general but he does his job well on the left side of the MF. He’s adaptable, play to instructions, and brings structure to the team. We will see his best when we sign a MF general. A MF of Partey and Szoboszlai with Xhaka for 4-3-3 will be great. Both players cost 70m. In my own little math, selling Auba or Laca will raise a significant part of the 70m. We also need another Central Defender. If we’re lucky to get rid of many dead woods for whatever amount, we should have a good… Read more »

Even Arteta recognizes that Xhaka is not a quality player – when asked what he brings to the team, he essentially said, “well, he has a good attitude”

Petit has said that, in his opinion, the club have become ‘average’ and at least 75% of the players don’t deserve to wear the shirt. I make him right, although for a guy who lined his pockets with that lot down the Kings Road, it’s a tiny bit rich (no pun intended). Still, the man has a point. At the moment, we are bang average.

There is a very decent chance that we’ll miss out on Europa League as well.