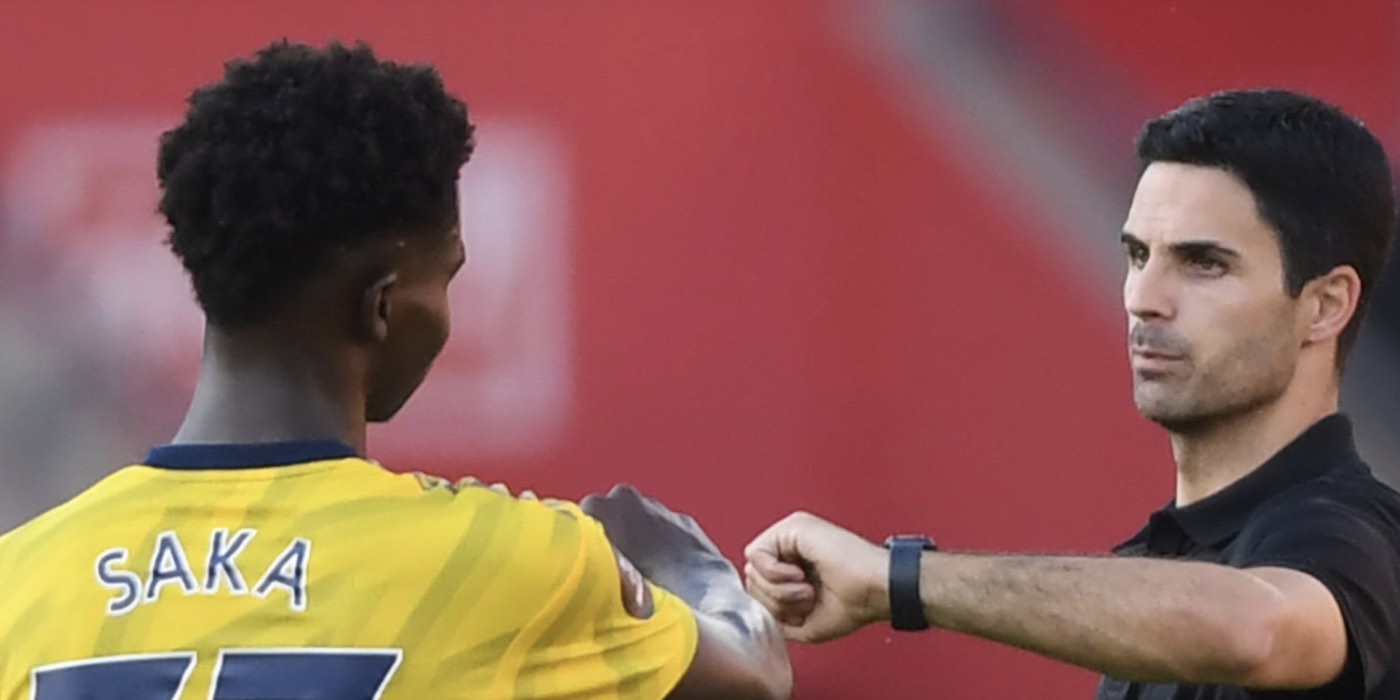 Mikel Arteta says that Bukayo Saka’s future is in his hands, with a contract offer on the table from the Gunners.

The 18 year started again tonight in the 2-0 win over Southampton, on the back of earlier comments from the Arsenal boss in which he expressed his confidence that the club could secure the future of one of the Academy’s brightest prospects.

It was something Arteta was asked about tonight, following the win at St Mary’s, and once more it sounds like he’s trying to convince the youngster his future would be best served in red and white as he heads into the final 12 months of his current deal.

“It’s in his hands,” he said. “He has a manager who has total belief in him.

“He has a club that really supports him, and teammates who adore him for who he is. He’s such a nice boy, he’s very intelligent and willing to learn.

“He’s eager to be the best, he tries to be the best every day. You can put him in different positions and he picks it up really quickly. He could have produced three goals today easily.

“You see the decisions he makes, he takes risks, he could have produced three goals today.

“The maturity he produces on the pitch is really good.”

Having handed contract extensions to four other players this week, let’s hope this one Arsenal can get over the line ASAP.

I don’t like the sound of that at all. I get the feeling that the message is “this is the money we will offer, even if other clubs will offer you more”.

Always worrisome when the manager has to come out and make statements like this. I hope Saka signs at least a 3-year deal (though longer would be preferable) — he’s young enough that he can give 2 years to the Gunners to see if there’s a turnaround.

If Ozil is on 350 then we should easily be giving this kid 100K a week. But this is Arsenal, so we know he’s been offered 25K a week otherwise known as the Carl Jenkinson contract.

It’s fair to say saka’s party are not wrong. We are horribly managed club and our reputation as a club of having homegrown superstars is not the greatest.

Young players are always given a chance here and plenty have been on show recently. The problem is in the club management and this weeks contracts went to all the wrong people.

Should Saka sign the contract?
If you were a talented youngster with a bright future ahead, would you stay at this club?

Ok – so where would he go? If he goes to Citeh or Liverpool he likely makes a lot more money but barely plays as he’s not good enough to beat out Salah, DeBruyne etc. He arguably has the same issue at Chelsea where competition is going to be pretty fierce and most of the players are around his age. Sp*rs – why would anyone go there? He’s basically going to be a guaranteed starter here which he won’t get at any of the other big 6 and will have the chance to develop. Unless he wants to go abroad… Read more »

Agreed, if he wants to stay in the UK we’re by far his best option. I’d be worried if Dortmund or Leipzig were interested in him and vice versa, but otherwise I think he’ll sign an extension with us.

well we would have said the same of AOC.. but he plays. so yeah if LFC were to buy him, he would get his chance.

Enough of the “big 6”. Arsenal are not a top 6 club for starters. So if Wolves, Leicester or even City (with Sane leaving) showed an interest in him, don’t you think any of those would be a better move than staying at Arsenal? He wouldn’t start every game at City but he’d work with Pep and be around winners and learn a winners mentality. Obviously I would love for him to stay, but being realistic, Arsenal is a sinking ship with no identity right now. Anybody ambitious player shouldn’t consider Arsenal right now.

Fair comment, but are you really saying that Wolves and Leicester are bigger clubs’ than Arsenal, because I’d have to suggest that Everton are actually a bigger club than either of them?

I don’t think they strictly mean current league position when referring to big 6, rather the fact that Arsenal is a significantly bigger club than Wolves or Leicester.

Just 4 years ago Liverpool finished 8th and Chelsea 10th, West Ham and Southampton finished above but aren’t bigger clubs by any measure.

That said, if Saka can’t be convinced to stay, heads should roll, that would represent a significant failure on Raul et al’s part.

I know we’re not great at the moment. But technically we are one of the big six, when was the last time we finished lower than sixth at end of season 30 years?

With a manager who believes in him enough to start him every week? Even if Arsenal continues to plateau, Saka plays in the most watched league in the world and can make a case for himself at any big club.

Arsenal has done more for youngsters coming through than any other club our size. Except bar Gnabry. While Spurs had an explosion of homegrown talents recently in a bloom of assholes, we have been churning talent into stars for ages.

Those who have performed haven’t yet signed though we love giving extensions to those who haven’t. Have all the faith in Arteta nothing on around him who should have sorted this out.

He’s going to get games, he’s known and valued at Arsenal by the staff and by the fans. On the other hand, if I were a young footballer, would I think Arsenal was the best place for my development, especially after the turbulence of the last few years? Sadly, I don’t think so. Why wasn’t this contract extended 2 years ago when it was clear Saka had something special? Is this about holding the club over a barrel or does he want to go somewhere else? Who knows. I hope he stays because he is our hope for the future.

That late cross for Lacazette really shows how big of a talent he is. How many other 18 year olds have perfected a single skill as much has Saka has with his crossing?

Really intelligent as well, and looks completely fearless, and has a bit of nastiness in him to. Overall really underrated, but thats probably for the best.

He should sign a t year extension with us. He’s so young he’ll only be 23-24 after 5 years. He can then move on if he wants to.
Over here he will be assured of a starting spot every week and arteta has a track record of training wingers.
Im just worried he might end up somewhere like dortmund for a cut price after they sell sancho.

It’ll also say how totally shit we are if we cant even keep hold to our 18 year old academy player whom we start every week.

I hope he signs but even if he doesn’t, he has done his price tag no harm. Hype in the media dictates the price and he’s getting noticed quite a biy now, 40-50mil shouldn’t be a problem. If he doesn’t want to be here, good luck else where. Better players have left Arsenal but the club is still standing and I still love it.

Yes. This ego-led fear of losing talent is as bad as, if not worse, not being able to manage contracts of players.

If he doesn’t sign, Arsenal gives another Saka a chance.

Price tag? He’s got 1 year left. He going to leave for COMPENSATION

sell Auba and Laca
renew Saka for 5,5 years
buy Partey, a good CB, Depay and Fekir and we will be a much much better team

May arse continue to shine a light unto this world

If the money is there then there’s no reason not to sign. Arsenal have educated him. Looked after hi and given him opportunity. He’s 18 with probably 12 years at the top to look forward to. He plays each week and the experience is invaluable for one that young. There should be absolutely no impatience to win things for at that age. Keep playing keep learning. If the club stands still in 3 years and he’s outgrown us then reassess. If this doesn’t go through either the wage offer was paltry or his agent has talked his own way into… Read more »

By far the best thing he could do to maximize his career earnings is to sign with us. No where else would he get the playing time. Sign here, develop, then in 3 years you can sign a huge contract. Take the bait somewhere else, don’t get playing time, don’t develop, playing where you don’t want to be, making less then you want in 10 years.

Let’s hope being young his parents have more of a say than his agent, and that they can see how well the boys been treated. At his age shouldn’t be about money or even titles, not many kids his age playing premier league football every week. Going forward, spend a few more years here get some experience, and bigger clubs will come, kids good enough for Real or Barca if he’s patient.

Andy
Reply to  The Spoon

Logically I agree, but young players’ egos are so massive these days that they would be highly susceptible to agent bullshit – ‘Klopp has guaranteed you’ll be pressing Robertson all the way for a first team start’ etc

That means he’s off. Get rid of these fuckers who dont want to stay at the club and using their parasite agents to fleece the club.

This sounds like he has a better offer. Echoes of Cashley (for the record, I want to be SO wrong here) – fear his head has been turned by Liverpool or City.

With sane leaving and saka going there, makes sense. Let’s see how this all works out.

Yes I fear he has, or is expecting one once the champions league places have played out.