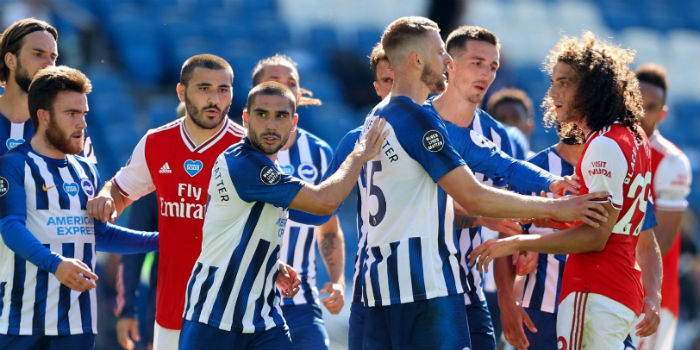 Mikel Arteta has urged his players to control their emotions after they reacted badly to Saturday’s defeat to Brighton by piling in on scorer of the winning goal, Neal Maupay.

The Frenchman had already made himself the target of Arsenal anger in the first half having unnecessarily jumped into keeper Bernd Leno causing the German to fall awkwardly. Stretchered off with his knee in a brace, our number one pointed the finger of blame at the striker who escaped unpunished.

It sounds as though our players spent the rest of the game aiming verbal digs in his direction but Maupay had the last laugh when he netted in the 95th minute.

At full-time, Matteo Guendouzi, as is so often the case, completely lost his cool and was caught on camera with his hands around the striker’s throat.

It remains to be seen if he’s punished but a ban of some sort could be coming his way.

With midfielders Granit Xhaka and Lucas Torreira injured, a suspension would leave Mikel Arteta with a major selection headache as gamnes continue to come thick and fast.

Unsurprisingly, he’s told his players to channel their anger in the right way.

“When we show frustration we have to show it in the right way,” said Arteta after the 2-1 defeat.

“I haven’t seen the images [from Guendouzi] or what happened but we will talk about it if that is the case. Emotionally, we have to control the situations much better.

“I think every game is completely different. When I was talking about competing there are details when you go ahead and game management-wise where we have to improve a lot.

“But we are a very young squad, I don’t want to use it as an excuse because it is still a football game and it doesn’t matter at what age you are competing, but at this level you can’t do it.”

Having lost consecutive games for the first time since taking over at Arsenal, Arteta was asked whether his squad were struggling with the new playing conditions, which include travelling to matches on the day of games and no fans.

“It would be difficult at home as well without fans – we are taking a big part of what makes this sport so special,” he said.

“It is what it is, we are playing on fantastic pitches with the same distances and dimensions, 11 against 11, let’s compete and win football games, that is all.

“I think the preparations towards City and Brighton were completely different, even if we try to go in the same day.

“I don’t think it is an excuse for us to use about preparation, we had more than enough in the game to win it comfortably and threw it again so I don’t like to use excuses like this when we lose a football game.”

Was super excited about the restart especially after all the postive Arteta stuff. And yet here we are again, same old same old

Also honestly what’s with those Arteta subs? Why bring on Tierney instead of maybe Martinelli and Ozil, when we need to score a goal. Can someone tell me if something is wrong with Martinelli? Coz i really don’t get it

There are rumours that a few weeks ago two of our players had tested positive for Covid 19 and then subsequently tested negative prior to the Manchester City game. Whether those rumours are true, of course, is another matter entirely, but if true, it may go to perhaps explaining the team selections, which were dubious to say the least. Let’s hope all the playing staff and everyone at Arsenal are in the clear. We’ve enough problems as it is.

Yeah i read that Ornstein article today. But they did get the all clear from PL just before the match. Not sure how much that mattered in his selections, coz honestly that team against City was really bizzare imo

And honestly even if you give him the benefit of the doubt here, he hasn’t been using Martinelli even before the lockdown if i remember correctly. So maybe there’s some other issue which we don’t know about

The only thing I can think of is Auba is literally I. Martinelli’s way in the team. But still it doesn’t excuse not bringing him on when you team needs a goal against a relegation threatened side

Martinelli – Auba (central) – Pepe, with Saka behind looks like our best attack to me.

It makes sense that Auba is in Martinelli’s way. What makes less sense is why Auba is still playing on the left in the first place. Lacazette has been poor for most of the season and Eddie (as much as I like him) hasn’t done enough yet to be starting as the spearhead over Aubameyang.

Play Aubameyang in his natural position and then stick Martinelli on the left. Surely that would make the most sense?

If there is a health concern, then they don’t travel, but both Ozil and Martinelli were there on Saturday. The Ozil ommission is understandable, based on form, but Martinelli? It’s almost like they want to tease us: find a player who looks genuinely exciting, then freeze him out.

Why? Özil is not on form? Who said it? The coach of a club willing to get rid of him? Remember what Raul said when he arrived and Bossman and last year of contract and… Btw, was Xhaka in better form after missing a friendly and several trainings? He still started against City and we know the rest. Back to UE, surprise surprise during another mercato window (again…), he preferred playing Suarez (Denis, remember?) who, from his own words, never was more than 50% fit and let Özil on the bench at Old Trafford. Still used the “not fit enough”… Read more »

Indeed it is and people should understand that ozil situation is a constant while managers remain variable. Another constant is the executive team which directly means ozil situation is being dictated from the very top. Until KSE is there we will keep on spiraling downwards. These leeches will suck us dry.

Possible suspicion of COVID-19 on Martinelli doesn’t make Tierney a striker or a Dani Alves.

My opinion might be in the minority but I do not want Europa league again. I would rather we just compete for domestic cups, try and get into top 4 while building a squad that is formidable enough for the champions league. We are not competitive in Europe, right now European cups are a distraction, one that this team neither has the legs or heart for.

At full-time, Matteo Guendouzi, as is so often the case, completely lost his cool and was caught on camera with his hands around the striker’s throat.

I don’t understand this, Blogs is always on Mattel’s case. I know Im not the only one who liked what he did… but as so often is the case.. Blogs has it’s own agenda against Guendouzi it seems.. like Xhaka

He should shut up, stop talking too much and work..

Maybe you should shut up too. We already have enough negativity since the restart. Give him a break already.

I agree. Arteta has a thankless task on his hands. He’s inherited an unsettled attack that blow hot and cold with every game, a spineless midfield with more gaping holes than a cheese in Xhaka’s fridge and as for the defence..at least a chocolate fire guard has a certain amount of use before it melts…..

You need to wait few more weeks to write this. Dont worry, it will turn around. People could see this miles away, the propaganda is still too strong

Anyone would think managers and players have contractual obligations to talk to the media… people take this stuff way too seriously. If it winds you up, don’t read it.

Are you familiar with the concept of a post match interview?

I’m sorry guys but this is seriously not good enough from everyone at the Arsenal; very poor and it can’t continue.
I honestly cannot remember an Arsenal side as limp as this since the ’80s.
Rant over , back to work.

Aside from our double in 1971and FA Cup win in 79 that decade was dire too in terms of our style of play and inconsistency with regards to results, even though we did have Brady, Stapleton and Jennings.

Incidentally I personally believe your username is our biggest fault line. Arteta is new in the job so we don’t truly know what his style of play is but if he has any Pep influence and his style is possession type then God help us we might need new players to execute his desires. We are trying way too many passes at the back and even struggling to get past the opposition high press. We look more like Osasuna and Granada than Barca. Personally I have always preferred fast attacking football like the early Wenger days and quick counter attacking… Read more »

“Unsurprisingly, he’s told his players to channel their anger in the right way.”, before: “Players needed to do something in the moment!!”   Amazing when Arteta capitulates and almost apologizes for injury to Leno, Arseblog congratulates Arteta and the club for said capitulation. I have no doubt there will be repeated offenses in near future. Southampton now has free rain on our players, again. Wenger had balls to call these scums out, Arteta is apologist for the league fucking us over for decades. 290 games played this season, 2 matches had 6+ fouls go without card. 2 out of 290.… Read more »

I had hoped Arteta could have brought some of City’s cynicism to the team, still early days but Saturday was gutless from pitch to bench. We don’t want to be Stoke but we need to protect our players carrying the ball and break up other teams when they have it. Pep and Wenger are both classy guys who managed to make their point when they are unhappy with refs and opposing players.

I usually support extreme ownership, but in this case Arteta’s comments feel off-base and tone deaf. How can his squad take ownership of 3 injuries in 2 games? How can they take ownership of referees offering zero protection to our players?   City broke up numerous counterattacks, incl. Gundo against Nelson, without getting any cards.   Maupay dropped his shoulder into Leno while he had both feet off the ground – which is a straight red in rugby. Bissouma kicked players all game including heavy late tackles on both Auba and Laca and didn’t get a card.   At a… Read more »