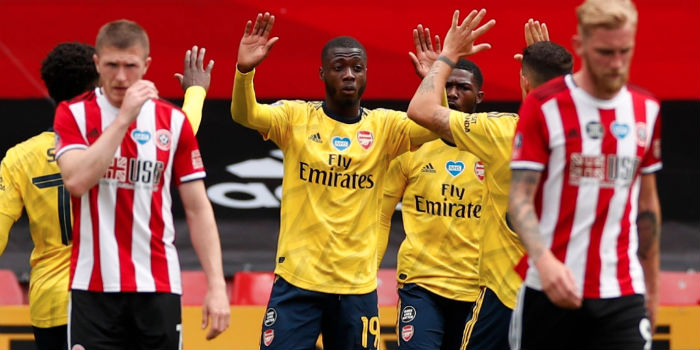 Mikel Arteta thinks things are beginning to click for Nicolas Pepe at Arsenal but he recognises the winger still has elements of his game that can be improved.

The Ivorian netted from the penalty spot at Bramall Lane – his eighth goal of the season – to help the Gunners beat Sheffield United 2-1 and secure a place in the FA Cup semi-final.

The 23-year-old might have done even more damage with two further chances in the first half and was still going strong late in the game with a cameo in the build=up to Dani Ceballos’ winner.

After the match, the boss admitted he was really pleased by the efforts of the club’s record signing going forward and in defence.

“I’m very excited about what he can bring (in the future) and what he’s bringing to the team this season,” he said.

“I think he’s made a click and I think he realises what he needs to do for the team when we don’t have the ball.

“I’m so pleased today, you’ve seen his defensive actions were incredible with what he’s doing, and then with the ball he gives us that creativity and flair that we need and big teams need.

“He’s always unpredictable with what can happen when he’s got the ball at his feet, so I think he’s [heading] in the right direction.”

Pepe has now contributed to 16 goals; an encouraging return given a tough debut campaign that has seen him in and out of the side under three different coaches.

The potential is clear for all to see, he now needs to improve his consistency.

“I really liked him from the past,” said Arteta. “I didn’t know him personally, but I think he is a player with incredible potential, but he needs to be decisive in every game and he needs to take care of moments in the game when he disconnects himself a little bit.

“He cannot do that, and I will be very persistent with him to try to change that because at his best, he can make the difference for the team.

He added: “It’s very important to try and understand a player and find out what his feelings are, how hard it’s been to adapt to a new country and a language that he doesn’t understand.

“He’s very willing, he’s such a nice boy and he’s always smiling, always positive around everybody. He’s a bit of a free spirit, but that’s good! We need all kinds of characters in the team and now he’s showing his commitment to us.”

Something of an introvert, Pepe appears to be one of those guys who is more likely to react positively to an arm around the shoulder than a rollicking. Arteta doesn’t mind that, he’s just keen for his players to feel supported in what they do.

“I don’t know how he [Pepe] was feeling before, we just try to produce the right amount for players and try to treat them a little bit individually for their needs, and hopefully we are in the right direction with Nico and that he can feel our total support.

“The only aim from us basically is to try and improve him and make him decisive for the team.”

Arteta on Ozil: I pick the players who are in better condition to play

The way he celebrated after scoring the penalty though ? .For a second i thought it was ruled no goal.

He looked like he just got out of bed after sleeping for 2 hours.

Hes been like that for a while because he knows he should be performing better. Can’t exactly run and jump into the cardboard crowd at the away end either.

He is ridiculously goal-dangerous. I was really looking forward to seeing a run of games with him, Auba, and Martinelli along the front line.

For all the doom and gloom, we have the bones of a very exiting attack with Pepe, Saka and Martinelli. Lacazette is off form but didn’t become a bad player over night, as well as a very fearless youngster in Nketiah. That’s assuming our world class talent Auba leaves (I’m still holding out naive hope he won’t!). If we could add one solid centre half and a little more technical ability in midfield we won’t be as far away as people think.

We have a new centre back coming anyway in Saliba.

And we bought Mari and signed Luiz another year. Not that many of them are any good, but we have a heap of them.

Outside of those dealing with injuries that had time to heal, I feel Pepe may have benefited most from the break in the season. Much like going from his first to his second season, it gave him time to process what he’s learned and to relax a bit. As with any young player, there’s plenty of room to grow, but I suspect that we will continue to see more of the player we expected in this final run of games.

He posted some pretty intensive workout videos during the break, like something out of Rocky.

As I said before it’s not surprising that his most promising performance since the restart came after switching the right side CM and wing back. Pepe has been isolated too often in recent games with Guendouzi and Bellerin failing to support him, which makes it easy to crowd him out. With willing runners around him like AMN, Willock and sometimes Ceballos, Pepe has more room to work his magic.

Pepe’s decision making was much improved today. As a result he moved the ball quickly upon receipt. That’s new and welcome. Earlier in the season he’d attempt to take on the 2 or 3 defenders on and give up a live ball turnover and a jail break would ensue.   On his curled goal earlier this week the defenders never got out to him. Ooops. Very pretty and assured goal. Pepe is rough on a defense if they give him time and space. That he is often defended by at least two defenders is testimony to how much respect our… Read more »

Pepe is very talented, but is only just beginning to become effective. I really hope his confidence keeps growing.

Better today first half but went missing again for large spells later on.   Thought our right side in general was strong today with AMN as wingback and Laca supporting Pepe’s runs. Two good chances cutting in besides the penalty he tucked away.   BUT in general, we need one more difference maker IMO up top beyond young options of Saka, Nelson or Martinelli next season.   Pepe clearly still work in progress. BUT encouraging signs if not hopefully so bc its end of season *regardless of covid19)   At 72m and back loaded, we are talking 20m+ committed as… Read more »

I just loved the way he let the defender pass the ball to Danni for the last goal rather than shooting himself.

Inho,he holds on to the ball too long and try to dribble his way through.There are many thugs in the epl who would not hesitate to prevent a goal at all costs.
Despite this he is apotential match winner

He needs to start peppering defences with those skills of his.