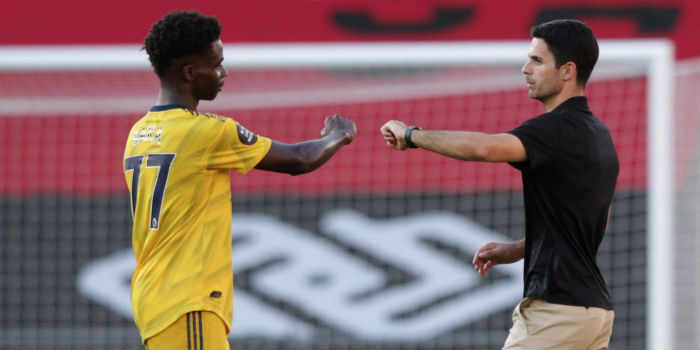 Mikel Arteta was pleased to see his side get back to winning ways as goals from Eddie Nketiah and Joe Willock sealed a 2-0 win at Southampton.

The victory, our first since 7 March, wasn’t particularly pretty but unlike the games against Manchester City and Brighton, the luck seemed to go our way.

First Nketiah pounced on a terrible pass by Saints keeper Alex McCarthy to roll into an empty net and late in the game more slack play by the home side saw Jack Stephens panicked into a rash challenge on Pierre-Emerick Aubameyang that led to a red card.

From the resulting free-kick, Willock doubled the lead following up a rebound after Lacazette had twice tried his luck.

“I got the reaction and we got the result that we needed and I’m really happy,” Arteta told Sky Sports.

“I know the second half performance could have been much better with the ball. We struggled, it’s very warm, the players were tired and exhausted. It’s difficult to make good decision [in those circumstances]. We could have won the game earlier.”

Asked what he said to the players before the game, he went on: “I asked them to be a team, to defend each other, to compete and to enjoy playing together. We are so fortunate to be where we are. As a team today, I liked what I saw.

He added: “The way we competed, the clarity of the ideas about what to do, the execution at times was really good in the first half.

“In the second half, we have to improve. We know we have a big margin to improve but at least there are some non-negotiables that have to be applied every three days and they’ve done those today.”

Having seen Eddie Nketiah steal the ball off keeper Alex McCarthy to put the Gunners in front, the boss was also happy to see his tactics pay dividends.

“I demand it all the time, to do high pressing, to be aggressive to be on the front foot and that’s what happens, you provoke mistakes in the first line. When that happens the goal is open and you’re closer to the goal to score.”

After a traumatic eight days, the boss admits that a win should do wonders for his players’ confidence as they prepare for Sunday’s FA Cup quarter-final showdown with Sheffield United.

“Football is about maintaining the right level of energy and passion,” he said.

“When you lose, you lose a bit of that. Winning is the best medicine. The players were really happy, they were exhausted, it was really hard to play in these conditions. They deserved to win.”

Glad we’ve stopped the rot, can’t lie and be happy with much about the game from the perspective of the teams performance though.

But it’s a good confidence boost ahead of the FA cup quarter final!

We were reasonably solid defensively, and significantly better in the midfield. I’ll take that. Xhaka is a vast improvement on Guendouzi at this point, even if he did misplace a few passes on the attack. Given the forward line firepower we have and the money we’ve spent there, we do need a few more conversions. At this point, I’d honestly consider selling both Auba and Laca if we could get a good price and a strong replacement.

I think Guendouzi is more talented than Xhaka but when ‘douzi plays we seem to lose all shape and average teams find it really easy to cut through us.

Guen is not a Top 6 club midfielder. I much prefer AMN to him in midfield.

More potential, sure. But Douzi is not better than Xhaka at the moment. They do better together than individually with Xhaka having better positional discipline (haha, comparatively) than Douzi who makes excellent if inconsistent forays through the middle.

How’s he more talented then?