Manchester City 3-0 Arsenal: By the numbers

“I want to delete the game from the hard drive, a lot of things happened and there isn’t a lot of points to take away from this game. Just delete it, start preparing for the game against Brighton and that’s it.”

That was from Mikel Arteta and it pretty much sums up things.

There really isn’t that much that you can learn from this match. We already knew that Manchester City is much better team than Arsenal. This match also saw two injuries in the first 20 minutes that threw the tactical plans into disarray and killed the flexibility to change the team even with the 5 allowed subs. Then to top things off Arsenal went down to 10 men early in the second half that all but ended the match.

These things really complicate the analysis of the match but we will do our best.

Manchester City 3-0 Arsenal: By the graphs 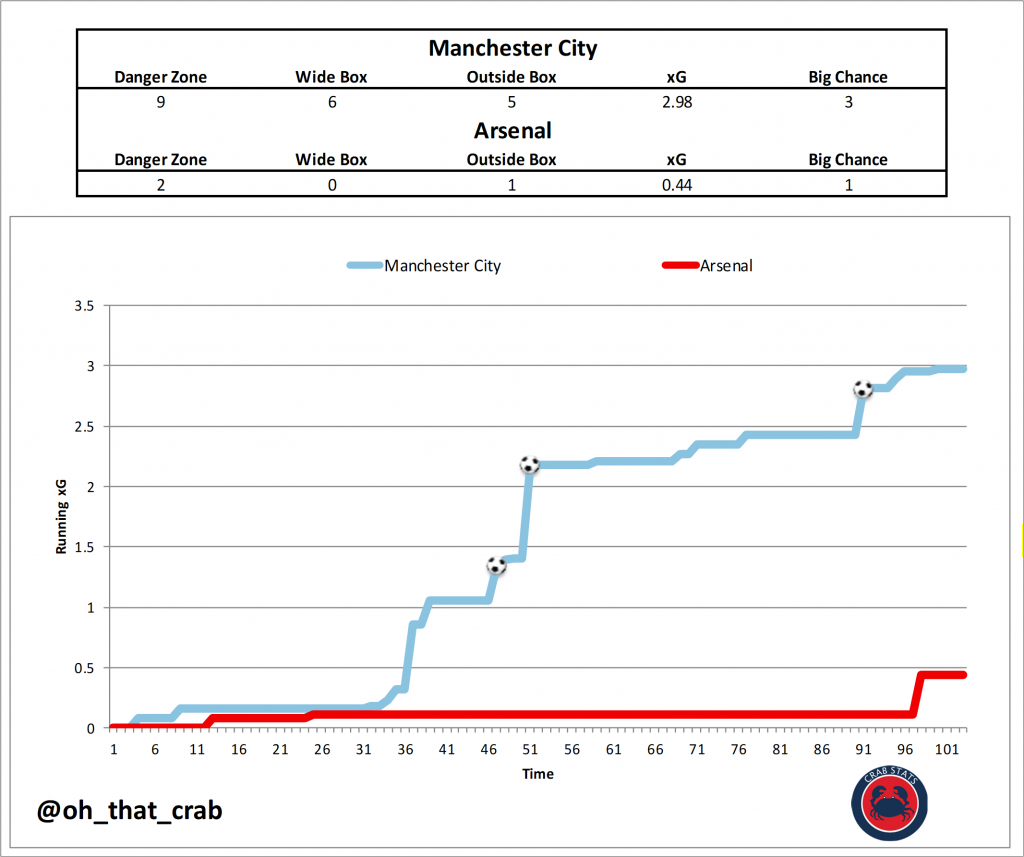 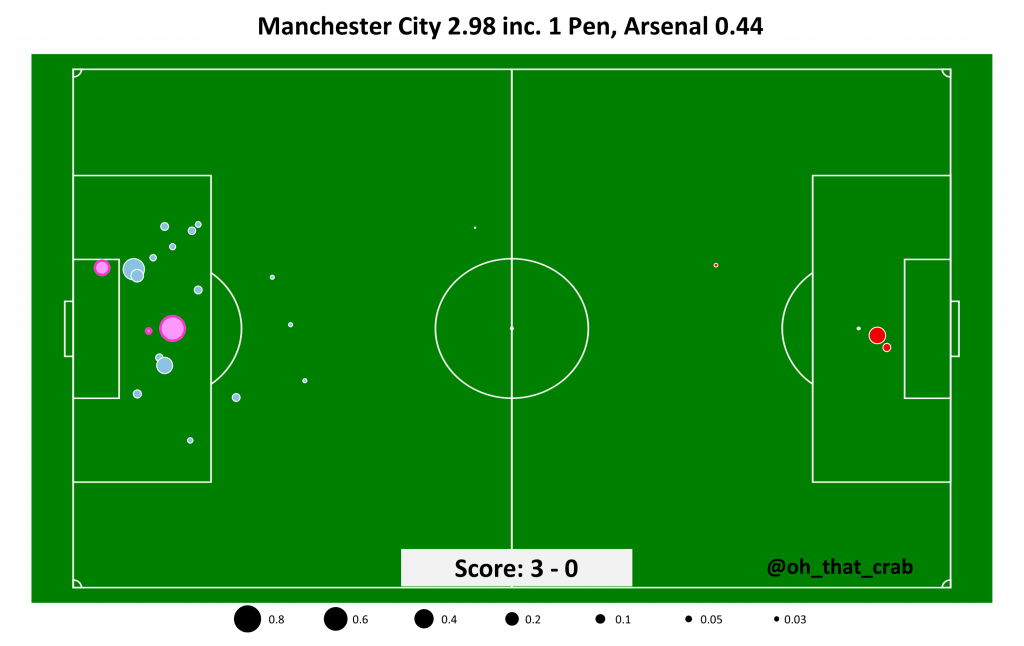 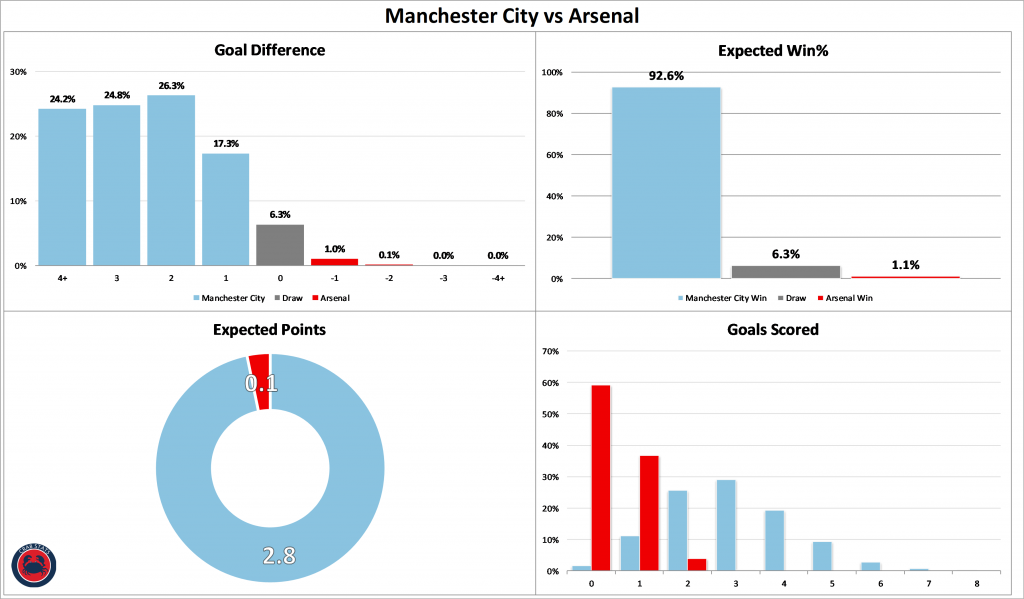 Manchester City 3-0 Arsenal: By the numbers

0 – Shots on target for Arsenal

12 – Shots on target for Manchester City (it’s never good when you concede 3 goals and still come away thinking that your goal keeper had a good match. This was one of those days and Bernd Leno definitely helped limit the damage from getting into the 5+ range)

3 – Shots total for Arsenal, with just one chance above 10% (the Pierre-Emerick Aubameyang chance at the end of the match)

10 – Touches in the box for Arsenal, led by Eddie Nketiah with 4

36 – Touches in the box for Manchester City, led by Raheem Sterling with 8

14 – Progressive Passes for Arsenal, led by Dani Ceballos, Kieran Tierney and Bukayo Saka with 3 each

55 – Progressive Passes for Manchester City, led by Raheem Sterling with 7

21 – Progressive Carries for Arsenal, led by Dani Ceballos with 5

3 – Successful dribbles by Arsenal, led by Kieran Tierney, Reiss Nelson and Eddie Nketiah with 1 each

14 – Tackles by Arsenal, led by Kieran Tierney with 3

9 – Tackles by Manchester City, led by Ilkay Gündogan with 3

20 – Interceptions and blocked passes by Arsenal, led by Dani Ceballos and Pierre-Emerick Aubameyang with 4 each

16 – Interceptions and blocked passed by Manchester City, led by Kyle Walker and Kevin De Bruyne with 3 each

34 – Ball recoveries by Arsenal, led by Matteo Guendouzi with 7

34 – Ball recoveries by Manchester City, led by David Silva with 5

I think that just about sums things up. Arsenal were beat by a better team, after playing them relatively close for 20-30 minutes. They suffered injuries and then played down a man for most of the second half. It came after a long break with minimal training before hand.

Everything pointed to this being a tough match pre-game and then things were made more difficult. I am doing my best not to overreact to this match and I am still looking forward to seeing how Arteta can lead this team through the end of the year.

Arsenal back to losing ways. It is like there has never been a break at all.
What a waste of space they are – would be best for everyone if they went under and disappeared forever. Give someone else a chance..
The most pointless club ever – too big to go down and too shit to challenge for anything.
Oh and no fucking money to change anything…

It is higher if it was an individual shot but because there was a shot that preceded it you need to take the conditional probability of that one missing plus into account. You do this so the xG doesn’t become higher than 1

Helps show the positives, however meager: Guendouzi and Ceballos worked their tails off even though we were overrun in midfield. Decision-making was poor going forward – seemed like Willock and Nketiah had never played together before…

missed “by the numbers” a lot