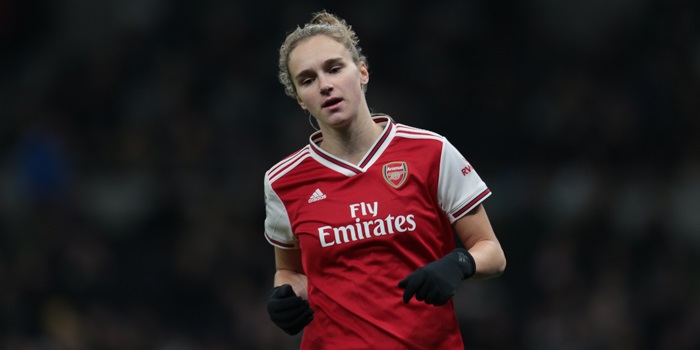 Hello and welcome to your regular ‘Vivianne Miedema is good at football’ broadcast. Are you sitting comfortably? Do you have your standard issue orange uniform? Are you ready to pledge allegiance to your GOAT statue? Then let us begin.

By now you have probably worked out that Vivianne Miedema is quite a good striker. She has won the WSL Golden Boot for the last two seasons despite never having taken a penalty for the club. Viv will tell you that she is much more than just a goal scorer, however. Your eyes will tell you that too.

Miedema told me in October, “I have lots of freedom at Arsenal and if you watch my games, yeah, I would say I play more like a 10. I know I have my goalscoring qualities, but I like setting people up. I like to drop and pick up the ball and see if I can send someone through on goal.” The Dutchwoman was not only the top goal scorer in the WSL last season (she is currently the leading scorer in the Champions League too) but the top creator in the division with 10 assists.

MIEDEMA THE CENTRE FORWARD
Miedema was the top scorer in the WSL with 16 goals this season after hitting 22 last season (when the season was actually completed). What else do you need to know? Well Viv scores 1.08 goals per 90, a total only bettered by Pauline Bremer at Manchester City, who has played less than half the amount of minutes Miedema has mustered.

Viv achieves 1.08 per 90 from an XG of 0.64. Pauline Bremer, Ellen White and Beth England all have a higher XG per 90 than Viv, but score fewer goals. Beth England takes 4.64 shots per game, Pauline Bremer takes a massive 6.60 per 90. Miedema scores her 1.08 goals from 3.76 shots. Basically, she is more clinical and wastes the ball far less often with unsuccessful shots than her peers.

With a goal conversion rate of 29%, she is comfortably the most clinical finisher in the league (Pauline Bremer has the second best rate at 22%). In short, she doesn’t take pot shots- only one of her goals has come from outside the penalty area in the WSL- the stoppage time lob against Reading when she was clean through.

📊 ㅡ Vivianne Miedema's second goal against Reading back in December 2019, was the only occasion we had scored in injury time (90+1) this season. #BarclaysFAWSL pic.twitter.com/v0h7jn5ZES

She is not a high-volume shooter particularly, she scores so many goals because her movement and her finishing are both at the elite level. Miedema scores more than her contemporaries and wastes less. Nobody in the division is close to her in the goal scoring stakes and she comes with almost none of the downsides that you get with many high volume goal scorers.

THE PERFECT 10
Miedema’s creative data also reads at an elite level. According to the Statsbomb data, she had 10 WSL assists in 2019-20, the most in the division ahead of Janine Beckie at Manchester City, who registered 8 assists. That’s 0.64 assists per 90- you guessed it, the highest in the WSL. That emanates from an XG assisted of 0.40 per game.

Again, the positions she gets into to deliver the final pass are worth 0.40 goals per 90 while her added individual quality on top inflates that by a shade under another quarter of a goal per 90. Viv is just as useful to Arsenal as a creator as she is a finisher and the player herself will tell you she prefers that side of the game to scoring goals.

After plundering six goals and four assists in 65 minutes against Bristol City in December, she told me, “I was probably happier with the assists.” With the likes of Danielle van de Donk, Jordan Nobbs and Kim Little only too happy to run in behind teams, Miedema often drifts away from the penalty area and takes a defender with her before slotting a through ball to one of the onrushing attacking midfielders.

For someone that scores so many goals inside the penalty area, she spends a lot of time outside of it knitting play together. With 24.5 open play passes per 90, she passes the ball more than any other centre-forward in the WSL. Her pass completion rate is 78% which is third among the centre-forwards in the WSL, which is not too shabby given the amount of risky passes she takes on. Guro Reiten is the only forward in the WSL who boasts a higher average for key passes per 90 (Miedema makes 1.91 per game).

That number looks even better when you consider that the only centre-forwards with a better pass completion rate are Pauline Bremer (82%), who hasn’t hit a single long pass all season and Courtney Sweetman-Kirk (79%) who plays for an ultra-defensive Liverpool side. Miedema plays 1.47 long passes per game, more than any other striker in the WSL and she completes 72% of those.

The data demonstrates just how much time she spends doing good work away from the penalty area, only Liverpool’s Rinsola Babajide exceeds Miedema’s 2.8 deep progressions [a pass, dribble or carry into the final third] per game and Babajide is also the only player to exceed the Arsenal number 11’s 29.13 carries per game. Again, one needs to consider that Liverpool are possibly the most defensive team in WSL history and their forwards spend a lot of time in their own half.

Miedema is just as prolific a passer at the business end of the pitch. No centre-forward in the division betters her 12.30 open play passes per 90 in the final third and nobody comes close to her average of 1.72 passes into the penalty area per 90. She completes 0.83 passes per game inside the penalty area too. At this point, I have become weary of typing the words “the most in the WSL.”

ALL TOGETHER
The positions Miedema takes as a provider and a scorer amount to 1.04 goals per game (XG and XG assisted). In reality, she provided 1.72 direct goal contributions per game this season. Pauline Bremer is second in the WSL with 1.43 goal contributions per 90, while Beth England provided 1.08 per 90. Nobody comes close to Viv’s output, she is absolutely in a class of her own.

She also does far more offensive work away from the penalty area than any of her peers. Miedema provides you with nearly two goals a game. Her movement is worth just over a goal per game and her individual quality to execute adds more than half a goal per game on top of that into the bargain. She has the output of an elite level number 10 and an elite level number 9 while only taking one space in the team.

The very best of @VivianneMiedema 🔥

Nice round up, Tim but you forgot to mention that Viv has acheived a lot of this with a bad back! Just think about the stats if she can be fully fit for a whole season. She might even smile when she scores then 🙂

VAR will solve the problem
Reply to  Peter Story Teller

A stat like Messi’s…double double of goals and assists. How she isn’t the World Player of the Year I dont know. I like the way she doesn’t smile when she scores!

And thank you, Viv. Mind-boggling stats.

I’m glad we have Viv