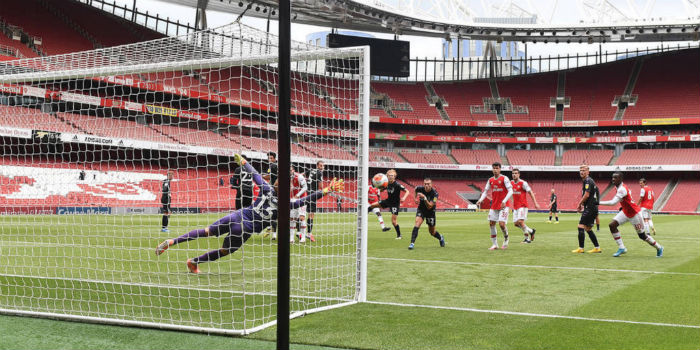 Eddie Nketiah scored a second half hat-trick as Arsenal coasted to a 6-0 win against Charlton in a behind-closed-doors friendly at Emirates Stadium.

The fixture was arranged at short notice with a view to helping both clubs work on their match sharpness as both the Premier League and Championship get ready to return.

We’ve not seen any of the action, but the club reports that Alex Lacazette and Pierre-Emerick Aubameyang both got on the scoresheet in the opening 45 minutes.

After the break, it sounds like it was the Eddie, Eddie, Eddie show, as the England under-21 international scoring three poacher’s strikes.

Joe Willock rounded off the scoring finding the top corner from the edge of the box.

At one point in the second half, Pierre-Emerick Aubameyang, sitting in the stands at the time, filmed a clip of the game that gave us a glimpse of the lineup. In defence, Sokratis was at right-back, Kolasinac at left-back and Pablo Mari and Rob Holding in the middle. Dani Ceballos, Granit Xhaka and Joe Willock made up the midfield.

Given Auba started the game, we can safely assume there were a number of substitutions prior to the video. The Charlton report says manager Lee Bowyer fielded a different team in each half.

The Gunners are due to play a couple more friendlies in the coming week or so as they gear up for the trip to Manchester City on 17 June.

I wonder if the empty stadiums will allow the younger players to perform without pressure. If so it could be a good end to the season for us.

It cuts both ways though, for both teams. It’ll be really interesting to hear the characters that stand out on the pitch and on the sidelines.

I really enjoyed watching the fights without fans, you can focus so much more on the sport as a technical spectacle. I wonder if football will be the same.

I personally quite like hearing the sweet sound of boots hit the leather ball. It’s also interesting to hear the players and coaches yell during the match and can show who the leaders of a team are. Be more interesting in the premier league too when it’s mostly in English and I definitely prefer this over the sound of fake crowds added to the game. Though I have heard some people say the quite in the stadium doesn’t feel and same and they don’t enjoy it as much. To each their own I guess.

It’s amazing how many Arsenal fan paint the picture of Holding bossing Costa that day.

When it was Costa who out muscled Holding for Chelsea’s goal.

Proving history is really written by the victors.

When I re-watched the match, Holding’s spirit and energy were apparent. But he had a very difficult time with Costa, who was, to be fair, probably the best striker in the league at the time. It was Mertesacker who repeatedly rescued Holding. We all knew Per had a great match, but on second viewing it was absolutely and forever the Mertesacker final.

Can you imagine if Liverpool crumble without their 12th man to get them over the line? Interesting end to the season.

It would need to be a crumble of truly epic proportions. They’d need to pretty much lose every remaining game

And they would stil win it, even if they lose all remaining games. Especially after we beat city the 17th.

It Is What It Is
Reply to  Easy tiger

We’re title deciders again! It’s like that time we decided to let Leicest…

arsepedant
Reply to  It Is What It Is

Actually we didn’t let Leicester win. We beat them home and away, the only team that year to do the double on them.

Maybe reading too much in to it but I’d say that would be our ‘plan B’ in each position of defence, implying that Mari won’t start against city.

I’m guessing based on this information that Bellerin, Mustafi, Luiz and Tierney played the first half at the back.

That’s right, starting line up is on Arsenal.com.

Interestingly, AMN started in midfield (with Guendouzi) and Nelson was picked over Pepe. Maybe reading too much into this, but would love it if AMN could find a way back into the team, he always seemed to have bags of talent and we are going to need to keep and improve the young’uns in the current Covid affect transfer market/finances.

AMN is good but doesn’t seem like a world beater yet. Wonder if Arteta wanted to instil some confidence by giving him the start. Can’t see him giving him a shot vs City just yet.

He plays the ball forward, keeps it away from opposition, has flair and keeps it simple. Plays with enough heart and can do more in his preferred position. An effective cog in a gear system

I am certain we are going to win more away matches now because with the away crowd we always shit in our pants. We have lacked character playing away for last 3 season. Our away form just might get good because of empty stadiums.

Missed a good opportunity to call it the Ed, Edd, n Eddy show for the 2nd half.

The football strings in my genes are coming alive, Crowd or no crowd life without football is like birthday without cake

Playing in a stadium with no noise and zero atmosphere. We should be used to it.

“… manager Lee Bowyer fielded a different team in each half.”

﻿If only he’d brought on Barcelona, he might still have made a game of it. ﻿

I know it has been true for a while, but still I hardly believe it. Lee Bowyer. . . a manager?!

Well I just watched the highlights, filmed from the dugout, u18s style. Mid season pre season vibes were heavy, especially with Nketia scoring a hatrick and most noteably for me was AMN starting in centre mid with Guendouzi, I love Mikel. Leno even made a stunner save at 1 nil. So yeh I think it’s true that our teams over the years tend to crumble under pressure, no fans is gonna be very helpful in Arsenal getting over that bug then when the fans comeback it’ll be a joy agai rather than an added pressure. Hopefully.

I wonder if Martin watched the game? ???

https://www.youtube.com/watch?v=h1g_e77bPAI
here’s the highlight (gotta say it felt weird without the crowd)

It was like watching pros play in a rec league. Strange indeed.

What up with Martinelli n Pepe?
I’d like to see these players pushed into forward positions this season as its bolloxed anyway. They are the future not Auba and Lacazette.