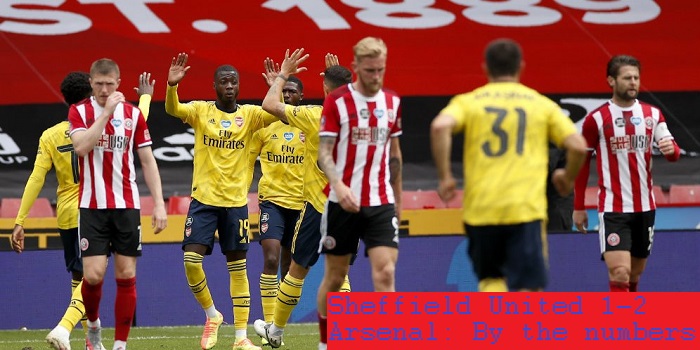 Arsenal are into the semi-final of the FA Cup, it is one thing that feels somewhat normal in this incredibly un-normal world.

It was a nervy match and Arsenal will need to play better if they want to have a chance of advancing to the final with their tough draw against Manchester City.

Sheffield United 1-2 Arsenal: By the graphs 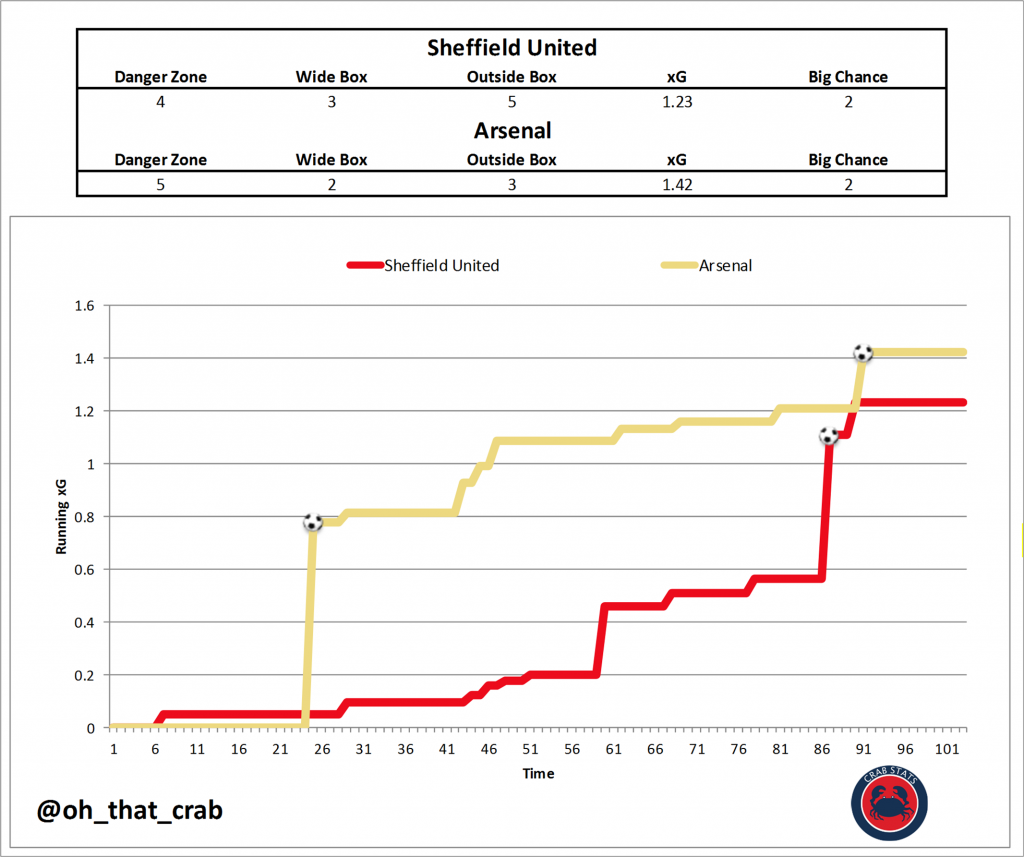 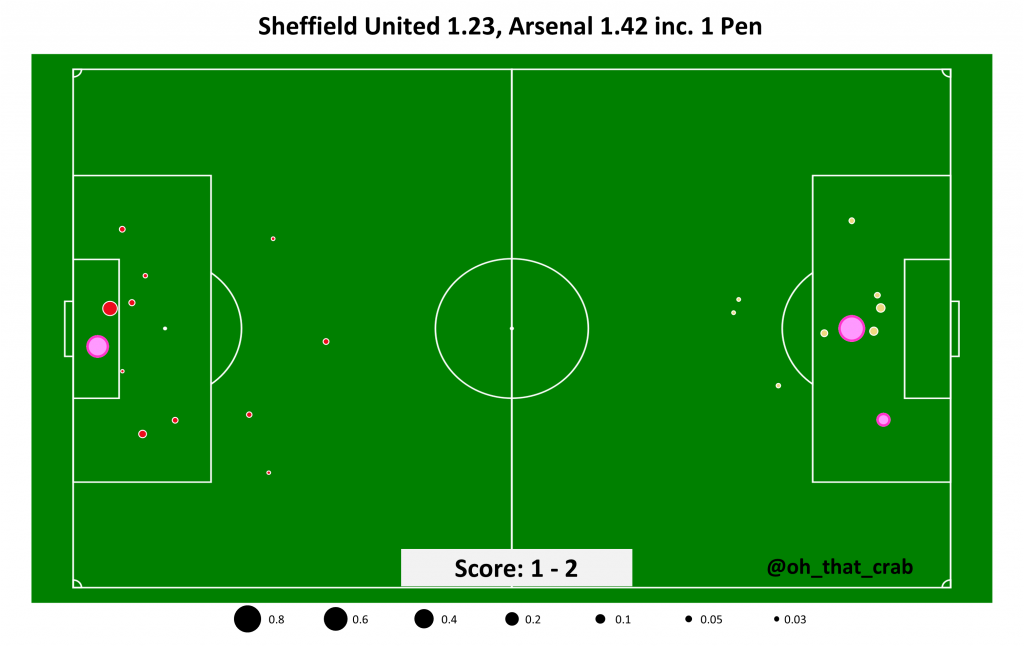 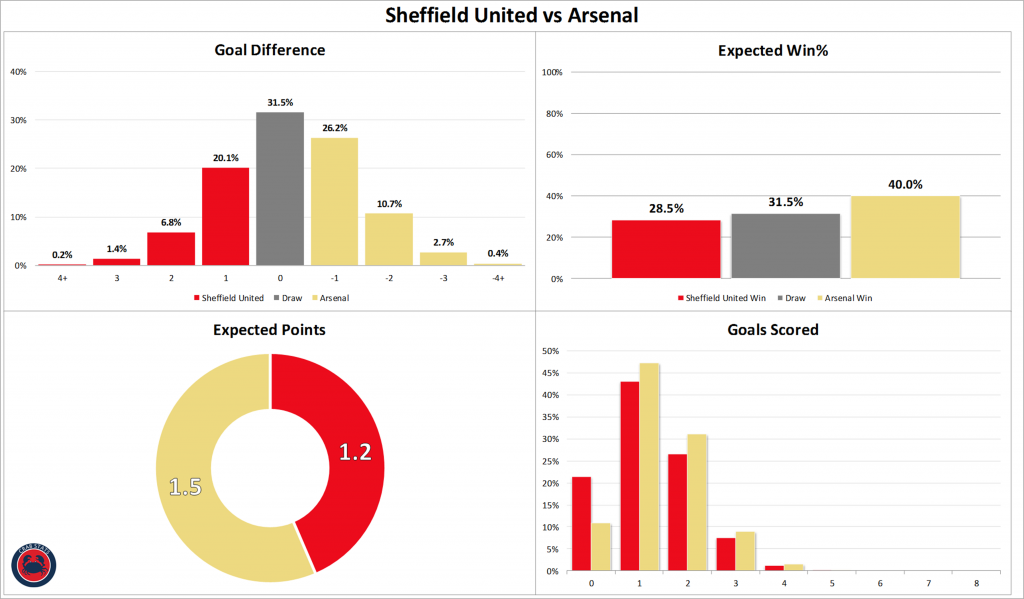 1 – Shot in Prime from those open play shots for Sheffield United.

0.4 – xG from those open play shots for Sheffield United.

I’d reckon that Mikel Arteta has spent a lot of time looking at how to improve Arsenal’s defense and while it is far from the finished product the open play defense is looking much improved.

Over the last 3 matches Arsenal have allowed 0.4, 0.5 and 0.6 expected goals from open play. The overall improvement is hard to see but there are several mitigating factors for Arteta since he took over. In the Premier League Arsenal have had 3 red cards, 4 first half forced injury changes. 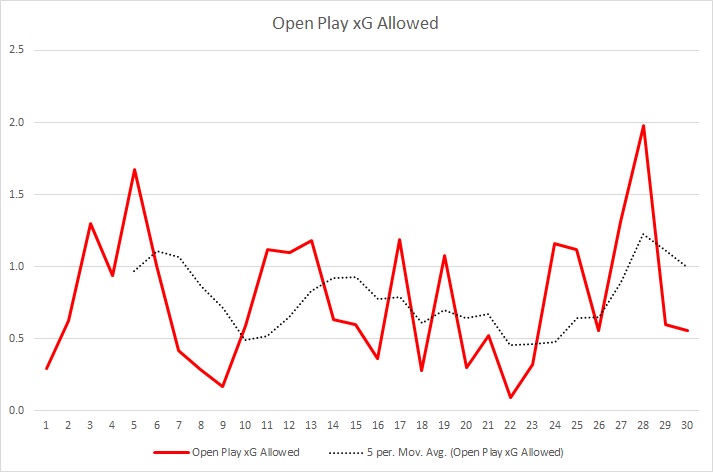 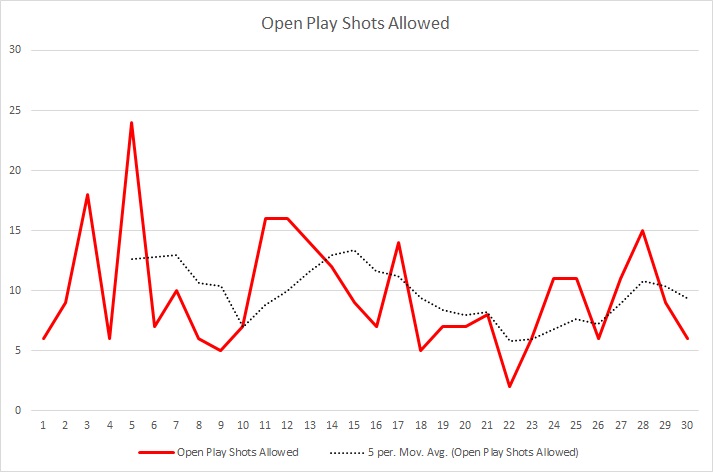 I am optimistic that outside of a couple of matches with mitigating circumstances that Arteta has done good work to add additional structure to Arsenal’s team shape. There is still a lot of work to fix (if that is even possible) Arsenal and there is still the glaring weakness that seems to have if not gotten worse, certainly has not gotten better with defending set plays.

7 – Touches in the box, led Arsenal

Mikel Arteta mentioned, Nicolas Pepe has “clicked” with how he has played since the re-start. It is still a little early to be able to make an concrete conclusions but the returns are promising.

One of the things that was clear in this match was that he was able to much more involved in the match than he has been in other matches. In this match he had 42 touches, with a good portion of them coming in central locations. The addition of the wing back next to him really seemed to free him from hugging the touchline.

Arsenal 2-0 Man City: By the numbers

Arsenal’s attacking play has looked quite unrecognisable. I don’t know if protecting a one goal lead is a long term or a short term fix by Arteta but it’s pretty dull to watch.

1 nil to the Arsenal is a strong tradition.

It’s the same at 0-0 as well as defending a lead, unfortunately. The midfield is the problem. They can’t beat the press, or pass through the lines. So they play patiently, and have no qualms about going all the way back to the keeper to recycle, so long as they retain possession. The only time this isn’t the case, is when they are chasing the game, and that’s because the opposition are sitting back to defend their lead. It can be soul-crushingly dull, but we all have to make do. Honestly, if no other CB is bought and all the… Read more »

Can’t put my finger on what exactly Xhaka contributes which makes him key to our winning ways.
Maybe there are some statistics that could tell?

Jabawoki
Reply to  Bob The Gunner

In a nutshell Reading of the game Linking midfield to attack Quickest release of the ball Most senior midfielder   Our midfield lacks the ball speed it once had as well as experience. Sanheli n co got rid of every single midfielder who Emery and Arteta needed in order to play quicker passes. In the past we had Rosicky, Wilshire, Ramsey, Santi, even Iwobi who could do that to great effect but they were surrounded by players who were mature.   Ceballos, Guendouzi and Willock, don’t read that part of the game well enough and hold the ball too long… Read more »

From his history prior to Emery he was basically a pretty good Captain. We tend to overlook that part of his game nowadays in order to make him fit the narrative.

ViennaGooner
Reply to  Bob The Gunner

I think Xhaka is far from perfect but still the best player we’ve got in that position.

Martin
Reply to  Bob The Gunner

Maybe the fact that he’s a fighter and has one of the best passing ranges of any player in the country.

Pepe’s performance perhaps indicates that three centre backs are needed, so a wing-back can support him (in this case AMN); however, can Bellerin perform this role based on his recent form or fitness? On the other side on the left Tierney can also prosper as could other players, such as Saka (or Martinelli next season). Kolasinac is unlikely going to be one of the centre backs long term, but would suffice at the mo’

The main problem is that nobody was passing the ball to our most talented dribbler.

Glad Pepe had a better match, but the main question is if Martin watched his first ever Arsenal game? 🤣

Having been a supporter for over 65 years and a long term season ticket holder I would say I have seen well over 2500 Arsenal matches. In my younger days I travelled around the country to see them

Any comments then, on the performance of your favorite player David Luiz during the Chelsea vs Arsenal game under Arteta in January ? 🤣
🤣🤣
Let me know when you watch your first Arsensk game. I will have her majesty send you a letter. 🤣🤣🤣

I also left you a gift in my coment. I know how much you like to corect poeple on evrything to make yourself fel beter, especialy in speling and gramar. You are not an Arsenak fan 🤣🤣🤣🤣