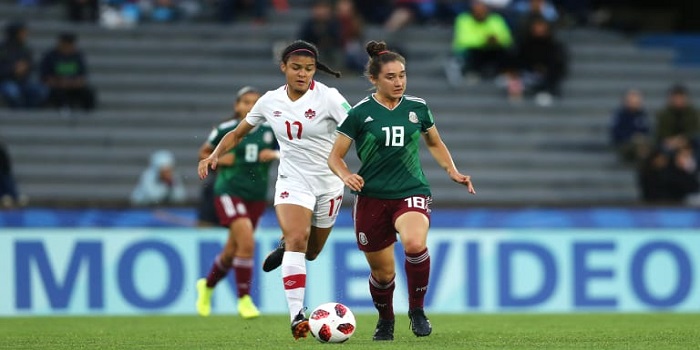 Arsenal Women youngster Silvana Flores will leave the club this summer, the player has revealed on her Instagram account. Flores is a very highly rated young player who has already been heavily involved with the senior Mexican national team. Her sister Tatiana is in the Arsenal academy, as is her brother Marcelo.

I love this picture so much. I am so grateful I got the opportunity to learn from these world-class players. I can’t express how much it means to have been a part of such a special club. Sadly, I am saying goodbye as I will be continuing my journey elsewhere. I will always have a place in my heart for Arsenal, and I am thankful for all the opportunities it has brought me. I wish the best to all Gunners, it was a pleasure to play with you, I learned so much each and every day.❤️

Flores featured in match day squads for the first team without ever appearing in a professional game, she did get 8 minutes against Bayern Munich in last July’s Emirates Cup game against Bayern Munich Frauen. She was born in Canada, but has a Mexican father and moved to England when she was 14.

Flores is a very highly rated young midfielder and she looks set to join WSL London rivals Chelsea. Fellow youngster Ruby Grant will also leave this summer for a scholarship at the University of North Carolina.

Perhaps Joe might have to dip into the transfer market again if there are ever any more games to play. The already small squad cannot get much smaller. We have relied on Silvana and Ruby to provide potential substitutes on many recent occasions.

This is not good news for us on so many levels. First that having small squad should mean more oportunities for youngster, but she didn’t get any. I can understand that we are losing our best youngsters to US or to Everton or ManU, because it is easier to get game time there, but to Chelsea? How it is possible that player sees more oportunities in Chelsea that has much deeper squad compared to us? Second, we have to do something about our squad. Lets not kid ourselves, before covid break, we wouldn’t have had a squad to put out… Read more »

Unless there is a significant upgrade in numbers it will be a very long time
before Arsenal win the WSL again. Also I question if JM is the right man for the job, before covid we were third but if we had continued playing we would have been in a very much lower position as half the team were injured and unable to play with very little in terms of subs due to his liking of small squads.

Is it Joe liking small squads or Arsenal not having the budget to have a bigger one? It’s hard to keep quality backups unless you are giving them sufficient playing time. We’ve got 5 quality/high-quality midfielders, arguably the best center forward in the game, a wing talent in Mead, three versatile wingers/ outside backs in McCabe, Foord and Evans, two solid or better centerbacks in Williams and Beattie. And Veje can play. That’s a pretty damn talented group. It was hard to assess this past season because there were so many injuries. I’m curious to know where others thing the… Read more »

Very disappointing news. The talent drain to the States has been an issue for AWFC for many years but on top of Ruby Grant’s departure we now have another of our brightest youngsters leaving. Perhaps even more worryingly, to our nearest rivals. What are Chelski going to offer Silvana Flores that she cant get with us? Surely not more chance of first team football? With their squad? Maybe its a crock of gold…….

If we had a pro-active FA who actually gave a damn about the women’s game they could take a look at what is happening here and implement something similar. It is not just Arsenal who are losing young talent to the US collegiate system but we have lost 4 or 5 now in the last few seasons. Come on FA, (wo)man up and do something positive for the female game in the UK. You don’t even have to think outside of the box the template is there for you already. Throw some money into an education system focused on sporting… Read more »

Excuse my French but oh ffs!
It now seems that we’re not renewing the contract for the Mighty Quinn if you believe the Arsenal website.

I all for bashing FA for not doing enough for women’s game, but for me this one is more on Arsenal to do something about. We are losing our best youngsters not only to States, but also the ones who decide to stay in England. If we are serious about keeping them, they need to have a path to first team. And this season showed that they don’t have one. We only used youngsters when we had nothing else left. When our team wasn’t savaged with injuries in autumn and we had ContiCup games agains Championships sides, we didn’t give… Read more »