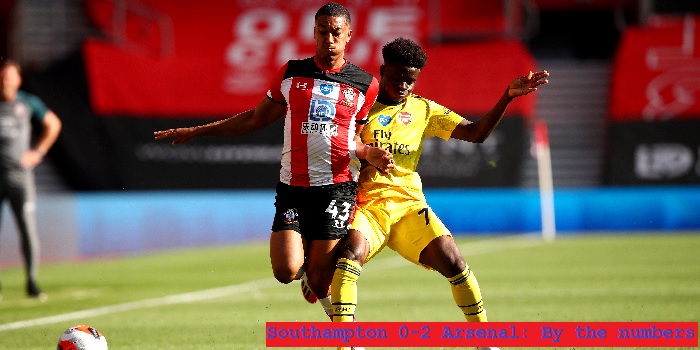 After two disappointing losses to re-start the Premier League season, Arsenal were able to get back to winning ways on the South Coast.

It wasn’t the most entertaining of matches but in the end the three points was what mattered and there was probably even some positives to take from the match.

Southampton 0-2 Arsenal: By the graphs 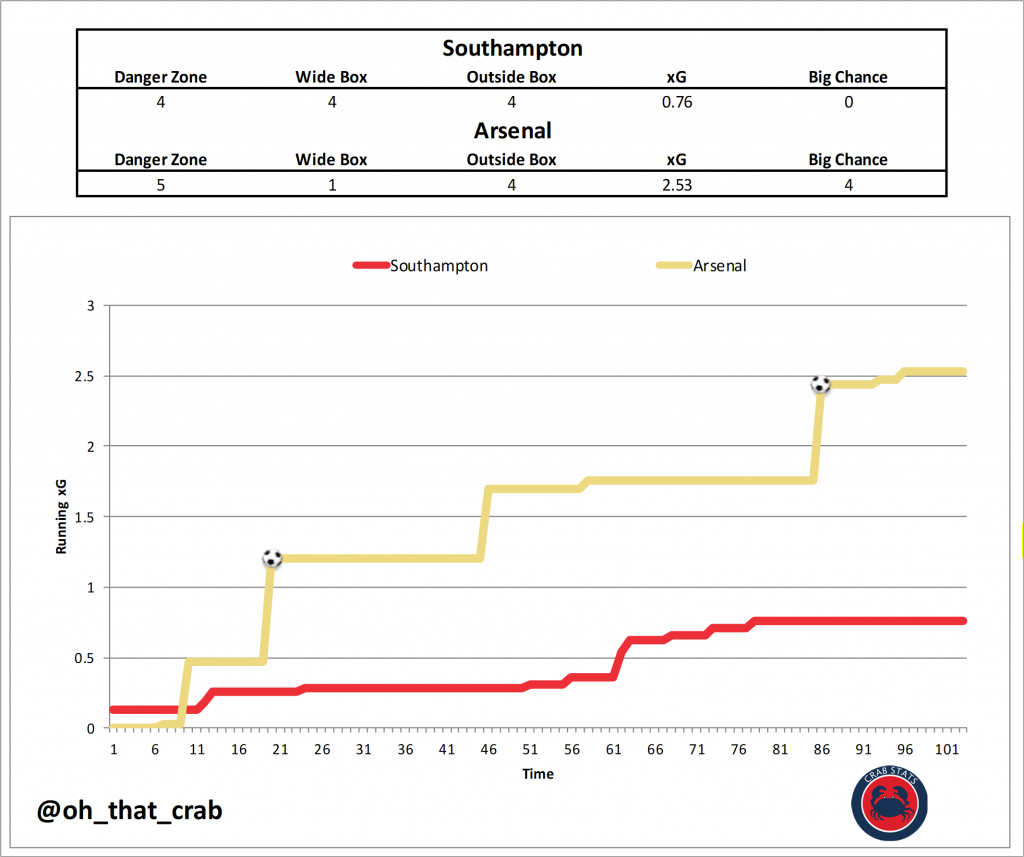 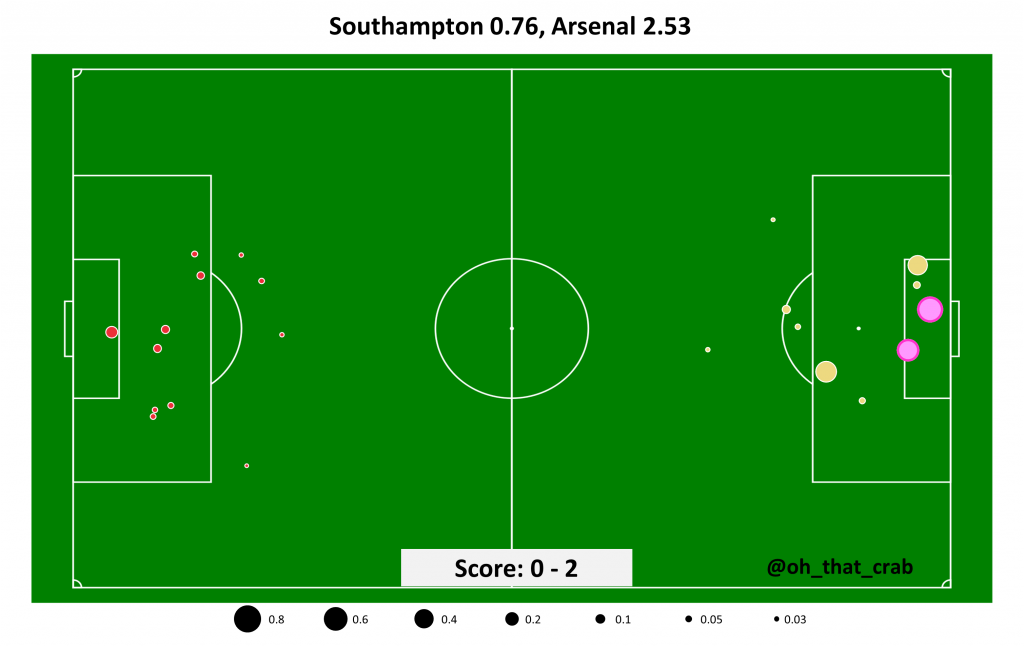 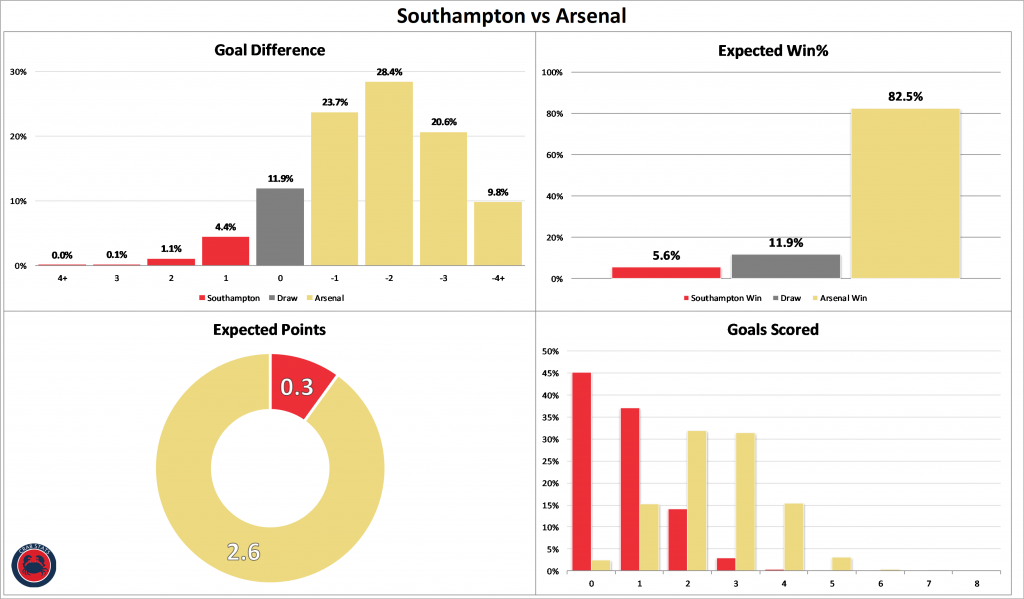 4 – Shots in prime (within 11 meters of goal) for Arsenal

2 – Shots in prime for Southampton

20 – Touches in the box for Arsenal, led by Pierre-Emerick Aubameyang with 7

22 – Touches in the box for Southampton, led by Danny Ings with 6

2.4 – Non-shot xG (on my ball progression model) for Arsenal

One of the interesting things that I noticed about this match is that Arsenal ended up looking really good on the xG but a lot of that came from limiting dangerous possession for Southampton from turning into shots.

That is typically a dangerous why to defend but for this match it worked out. The correlation between deep touches and conceding goals is very high. If the matches weren’t coming thick and fast that would be a really interesting thing to go back and re-watch what happened with Southampton, was it wasteful attacking? Was it good defending from Arsenal? Maybe a bit of a combination of the two?

Another thing that appeared to happen was the Arsenal’s intensity drop a bit after scoring the first goal, where for the most part the were content to try to play on the counter.

Bukayo Saka continues to impress, even in a new role

4 – Progressive Passes completed, tied for most on Arsenal

It is really interesting to see that Mikel Arteta has moved Saka into a midfield role over the last two matches and seen how different and adaptable Saka has been. As the left midfielder his defensive and attacking responsibilities have been lessened but he has responded with becoming an integral part of Arsenal’s ability to progress the ball. Against Southampton he was second among the outfield players in total progressive distance between passing and carrying the ball behind just Kieran Tierney.

The (worrying?) importance of Granit Xhaka

+1.2 – Arsenal’s net goal difference per 90 in the Premier League when Granit Xhaka plays versus when he doesn’t, Arsenal score 0.4 more goals per 90 with Xhaka on the field and -0.8 when he is on the bench or injured.

+0.77 – Arsenal’s net xG difference per 90 in the Premier League when Granit Xhaka plays versus when he doesn’t, Arsenal create 0.04 more xG per 90 with Xhaka on the field and -0.7 when he is on the bench or injured.

1.6 – Points per match in the Premier League when Granit Xhaka plays for Arsenal. Over a 38 match season that would come to just under 61 points much better than the 53 points Arsenal on pace for.

With and without stats are really hard for football (the limited subs and total combinations of players make it really hard to separate out true signal from the noise) and should most likely be avoided but I highlight the above because I think it shows a good example of how suggesting a starting point in the discussion of how important Xhaka is to the Arsenal midfield.

On an observational level I think that this checks out as well. Arsenal look to generally have more control and ability to execute the plans that the Arsenal managers have tried to implement with Xhaka on the field. I think that this also highlights one of the reasons that Arsenal have been linked with other midfielders because the ceiling of the Arsenal team with Xhaka as the lead midfielder hasn’t been much better than 5th place and he has failed to grow into the line of midfielders that has gone from Patrick Vieira to Cesc Fabergas to Mikel Arteta to Santi Cazorla.

There are a lot of holes in this Arsenal team and Xhaka is probably not the most pressing one to fix but I wouldn’t be surprised if Arsenal’s cieling is continued to limited with him as a pivotal (no pun intended) midfielder.

Sources: Opta via whoscored, my own database. StatsBomb via FBref

“Enjoy the moment” – Arteta not concerned by Saka hype

Can’t believe Nketiah’s tap in to an empty net was only 0.73 xG. I know he had to put the work in to get there, but the xG stat only considers the final shot, right? Or is it also predicated on the fact that, even from that range, there would often still be a goalkeeper or defender to beat on the goalline?

Also doesn’t know who it is I guess. For Ronnie Rosenthal, xG from there would have been 0.03.

Its santi cazorla, not carzola. I dont understand how arsenal fans always were butchering his name

On the difficulty of the “with or without” stats–wasn’t it the case that after his arrival, Arsenal did not lose a match when Mustafi played for a very long time? The points per game with him in the lineup must have been much higher than without him.