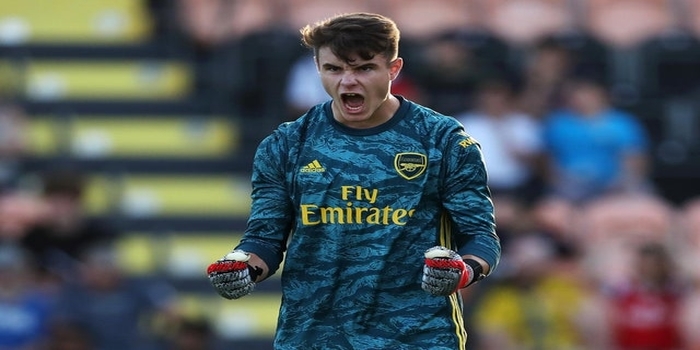 The injury suffered by Bernd Leno against Brighton & Hove Albion has led to greater focus on Arsenal’s goalkeeping situation and those who will step up in his absence.

Emiliano Martinez is set to benefit the most, with the 27-year-old poised to finally receive a lengthy run in the starting lineup.

Matt Macey, who has a year remaining on his contract, is now set to become second choice, despite having not played any first-team football this season.

Beyond that, there are a crop of young goalkeepers who could become involved with the first-team, in training sessions (Mikel Arteta likes to have three goalkeepers in training) or perhaps even in matchday squads should further injuries occur.

Hein is the current first-choice goalkeeper for Arsenal U23s and has been at the club for almost two years following his switch from Nomme United.

The Estonia U21 international has much potential but is somewhat error prone and kept just one clean sheet in eleven games for the second-string this season.

Although he is capable of making some fantastic saves, his distribution isn’t of the highest standard.

Somewhat short for a goalkeeper, he has had to be patient this campaign as he was restricted to just two appearances for the U23s.

However, he appears to be in pole position to train with the first-team at present having been seen at the training ground recently, while Hein temporarily headed back to Estonia after the academy season was brought to an early end.

Hillson has good reactions and organises his defence very well.

Previously seen as Arsenal’s standout young goalkeeper, Okonkwo didn’t play at all this season because of personal issues.

The England youth international is closing in on a return to action, but it is perhaps a bit too soon for him to be considered for first-team involvement.

When he did last play, in the 2018/19 season, Okonkwo produced some outstanding performances for the U23s, commanding his penalty area excellently and making some fine stops. He also travelled with the first-team squad for a friendly in Dubai.

A Hale End product, Smith spent much of the season on the sidelines after he suffered an injury while on loan at non-league side Salisbury.

During his time at Salisbury Smith produced some encouraging performances as he gained his first experience of senior football.

Smith signed his first professional contract this season but might not be considered for the step up just yet.

Arsenal also have Deyan Iliev on their books, but the 25-year-old, who is on loan at Jagiellonia Bialystok, is also currently injured. His loan deal is set to expire at the end of this month so he could be called upon in training if he recovers by then.

We’re fucked. Yay. Someone throw me a silver lining

At least it’s not been nearly 60 years since we won the title. Whatever happens to us, this time next May (or whenever next season finishes) the jokes will be well and truly on that lot up the road. 60 years without a title and (hopefully) 30 years without an FA Cup. And they have the front to call themselves a big club. 😆

We got the spurs capitan, their pride and joy, Sol Cambell on a free. Back then he was valued around 20-25 million.

What’s going on with Okonkwo then? Sounds serious. The word on the street is he’s a future first-team #1.

If you stuck all these lads between the sticks at the same time, they’d still be sweating buckets having to deal constantly with Mustafi’s Mirth-Inducers.

Every time I see Iliev mentioned he seems to be injured

The Voice of the Noise
Reply to  Riku

If Leno is out for long (God I hope he isn’t), I wouldn’t mind us offering Romero a deal. He’s looked quite good for Man U. whenever he has featured.

What personal issues does Okonkwo have?

I saw Matt Macey down at Plymouth last season , playing against Southend United.He fumbled the ball several times,spilled a free-kick,it was only the inept Southend players that saved him.He lost his place soon after, to be fair he regained his place, and has probably improved.
Scary to think we are one injury away from a rookie keeper though.

surprised we haven’t had an article about Sebastian Frey yet.

Emre can could have been an option