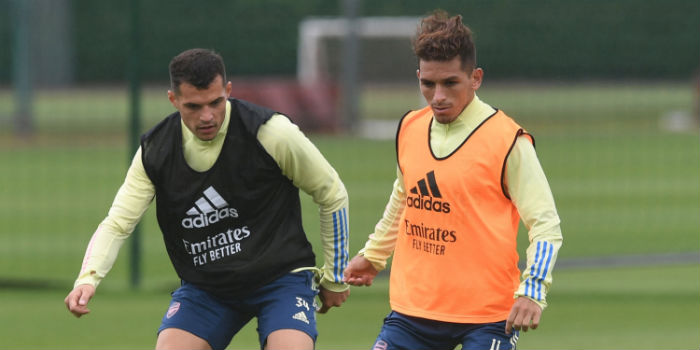 Lucas Torreira provided Mikel Arteta with a timely boost after returning to full training for the first time since March.

The Uruguayan fractured his ankle in the 2-0 FA Cup win over Portsmouth and had been due to miss the rest of the season before the Covid-19 lockdown brought football to a halt.

It’s likely that tomorrow’s game with Norwich will come too soon for the midfielder but we should be able to ease him into action over the next couple of weeks.

Elsewhere, David Luiz and Mesut Ozil are both doubts for the visit of the Canaries. The Brazilian picked up a knock to his knee on Sunday at Bramall Lane and the German continues to nurse a sore back. Whether the World Cup winner is actually injured is anyone’s guess at this point.

Cedric Soares is now in a position to compete with Hector Bellerin and Ainsley Maitland-Niles for the right-back slot. The Portuguese is yet to make his debut after thigh and facial injuries respectively but is now fully fit.

Judging by the fact the club think Bernd Leno could be back in four weeks time, we have to assume the German is making decent progress with is knee rehab. We probably won’t see him this season but at least he’ll be ready for pre-season training.

Hope AMN has had a change of heart after seeing how effective he can be in making that RB/RWB his own, would love to see him retain that position tomorrow night.

Tricky situation for AMN next season: be the 2nd/3rd choice RB or try to force himself in the contention for a MF spot despite Arteta’s reservations about him.
Hope the latter, could be a very useful and cheap squad player, specially with Ceballos leaving (and prolly Guendouzi).

I think Arteta sees attributes in AMN that are similar to Kyle Walker. He would make a very good RB

Goodnews to have the Uruguayan back..

Our medical team are quite ingenious with Ozil’s “injuries”
Last week Arteta implied he needed to work harder; today, it’s a sore back! It couldn’t be that from leaning his back on the reserve seat: he has barely sat there.
I hope this Ozil circus show ends this summer.

Perhaps his back has suffered from playing Fortnite all day.

Heard he put it out whilst bending over to pick his wallet up after dropping it ?

I heard he should have switched hands while holding the parasol from time to time, but nobody told him.

Is soares allowed to play this year? I thought there was a funny situation as he was out of contract with Southampton, there wouldn’t have been a loan deal to extend so we’ve signed him permanently, though this can’t happen until the transfer window opens.

Where have you been, dude?!

I feel like I’ve definitely missed something here! So, did Southampton extend his contract for the next few weeks so our loan can be extended? I guess his permanent contract with us will start once the transfer window opens…

Yep, I knew about that. The quirk of this one was that special dispensation was being made to extend loan agreements, however, in the case of Soares, as of 30th June he would no longer be a Southampton player as his contract would have expired. So we couldn’t loan him from them as he was no longer a Southampton player. And we have given him a four year deal so we’re signing him as a free agent, but we can’t sign him until the transfer window. So in order for him to play in the remainder of this season, he… Read more »

The Kolkata Gooner
Reply to  Joel

Yeah, everything was sorted last week.

Good news with Torreira, we need as many fit bodies as possible with games coming thick and fast.:)

Özil has had back problems for at least 3 seasons. This is nothing new and surely a frustration for at least the player himself. All a fan can do is wishing him a quick recovery.

Ozil and his troublesome “sore pinky finger”.
We know what the board and Ozil want at this point in time, and I don’t blame either.

Sensible comment. Its easier for the fan boys, aftv wannabes, and sitters of couches in their parents’ basements to sling BS.   Its disgusting. Ozil is an amazing footballer. Period.   Any player, with the upheaval the club has had this season, could easily struggle. And he has had the back injury before. But, the FIFA geniuses here know better. Right it makes total sense: slag off a proven elite player like Ozil, unique one-of-a-kind skills and vision, title winner, world cup winner. Because the fan boys know better.   And, TBH, blogs doesn’t help with the innuendos. Gets clicks… Read more »

It’ll be nice to have Lucas back. Fully fit, he’s a real asset to the team.

I’ve got a feeling that we’ve seen the last of Mesut Ozil in an Arsenal shirt. I don’t he’s injured: I think the club are lining up a transfer or loan and so are avoiding him getting injured. Keeping him at the club for next season would be perverse: he’s a bad smell that needs to be removed.

I agree that this situation is unberable and must end. However, if Arteta deemed that he could add something to our attack I think we should use him and take the risk. I understand if Arteta does not believe this to be the case and want to use people who are the future

Arteta said he would try and get the best out of Ozil when he took charge, same as Freddie and Emery before him. And just like them he appears to have changed his mind and given up on him. I have no idea what’s happening behind closed doors but it must be ugly.

I have no idea either. But it was pretty clear we were a better side with Ozil playing than without; it was looking like Arteta had resurrected his career with Arsenal (like Torreira and Mustafi). Now, unless the injury report is actually true (not impossible, but not obviously true either), something has happened that cannot be fixed.

Yes he really is a world class player, his reading of the game is fantastic, and unarguably has a brilliant ball ability, the fact he’s on huge salary whilst prone to chronic back problems is not his problem and should of been negotiated in his contract, I hope the injurie improves for him and he gets the chance to show his ability and love for the club,
He is an Arsenal player and should be supported through this hard he is having, derogative comments are not going help the player or club.

Yeah, Ozil stinks the place out. If he isn’t going to accept a transfer away then we should end the charade and officially drop him to the reserves and be done with the nonsense

Ozil has been carrying this team for so long it’s no wonder that he’s put his back out….

More likely put it out taking all those wages home

If they pay him in coins, that might well be.

Blogs you need a sarcasm font……

Quite hard to understand the treatment received by Ozil in Arsenal. It s so unprofessional for manager to ignore his ability to create chances. The rumors said that he s lazy during training is ridiculous. Many players simply don’t show off everything during training because there is no reason to overly do it. Mikel seems to emulate Unai failure. Ozil needs to be patient just to get every pound and then walks away as free agent. Arsenal will be the loser in this gamble.

It’s also unprofessional to not tackle. His press is embarrassing slows down when nears player with the ball so he doesn’t have to engage. Name another player in the Premier league that does this?

I’m so happy someone else spotted this.

Özil is very clever at padding his stats. He’s taken the term “hiding in plain sight” to new levels: hiding in awkward pockets of space, yet visible in terms of passing the ball, but still hiding in terms of impact.

No you tool I expect him to create but there has been little evidence of it since he signed his contract. Bergkamp did all of the above and more and still put a tackle in but the comparison is man against boy.

This comment exactly! Says everything. And don’t forget Bergkamp scored world class goals every other week with it. He is a true legend. Ozil disgusts me.

Yes actually, both Henry and Bergkamp were excellent tacklers when the need arose. Did you ever watch them play??

Guns Up
Reply to  Brad

Then we’ll ignore training and just go by what he’s done in matches. Over the last two seasons, that amounts to 6 goals and 6 assists, I believe. That’s also known in these parts as fuck all. Arsenal will undoubtedly be the losers when he walks away, but that fate was sealed when the ink dried on his contract, and it has nothing to do with their “treatment” of poor ol’ Ozil.

I cannot blame ozil for not playing. He is not the manager. If they really want ozil to deserve every cent of his pay, they should play him regardless of minutes…

I don’t like to speculate, but I will here – has anyone else considered that perhaps Ozil suffers from serious anxiety or other mental health issues? In the last few years he hasn’t looked right on the pitch, and these sore back excuses always seem like Arsenal are protecting him. I hope it’s not the case but it would explain why there’s always this awkwardness around him. I wouldn’t be surprised to hear him open-up after retiring about these kinds of things.

Obviously I could be totally wrong here, it’s mere speculation on my part.

A Different George
Reply to  Torterrier

I very much thought about this right after the last World Cup, when Ozil was a main target of plainly racist scapegoating by German fans, the DFB, and the Bayern mafia. I think Arsenal supporters really underestimated the pressure this put him under. But I have no idea of what’s going on now.

DaDude
Reply to  A Different George

Could you elaborate on that? Özils nationatily is German and his race is caucasian, I assume. Who has racially scapegoated him? He likes to mingle with foreign quasi dictators, yeah, and that has been mentioned, but I don’t see the racism.

I’ve thought this could be the issue. Mental health problems have no respect for wage packets.

I would like to see Cedric start to see what he can do. At home to the worst team in the league is surely the optimum time to make a debut.

To sell or loan Ozil will not be easy. No club will pay a transfer fee with those wages and a loan team won’t take him unless at least half of more of his salary is covered by Arsenal. Do people really think this Arsenal board would pay £150K/200K a week of his salary to a loan team? His high salary is one giant albatross. I personally think we are stuck with him as he’s happy to see out his contract. The situation is similar to Bale and Madrid but the salary there is even higher. I would personally play… Read more »

Loaning him is probably the only solution and to pay half or more of his wages is probably better than paying all his wages to sit on the bench. Hes finished at the top level.

Let’s hope Ozil is fit for the FA Cup Semifinal and – that being the case – Arteta has the common sense to play him.

Pls arteta bring Steve bould back to help u