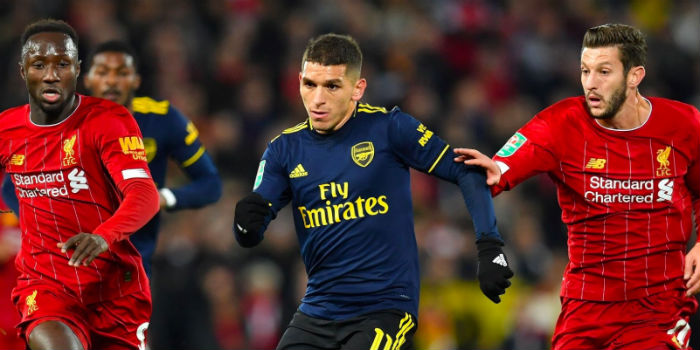 Lucas Torreira has revealed he’d love to play for Boca Juniors one day having watched the Buenos Aires side on television as a youngster.

While he’s never been to La Bombonera, he’s well aware of the intensity of football Argentine football and would prefer to make the move before his legs give out.

Speaking to Fox Sports Argentina, hence the skew of the chat, Torreira did make clear that he’s committed to Arsenal and is under contract for another three years.

“Wearing Boca’s shirt is a wish and a pending dream that I have,” he said (quotes translated by Sport Witness).

“This is how I feel, I say it at the age of 24 and being at one of the most important teams in the world like Arsenal.

“Hopefully someday, depending on how things happen, because in football you never know. Hopefully, I will be given that possibility because it is something I really want and it would be a privilege.”

He added: “Today my intention and my head are at Arsenal. I want to recover, go back to 100%. I have a very long contract with the club, until 2023 and it was very difficult for me to get here.”

“Before starting the interview, I was asked the question: ‘What if Roman calls you?’ I hope Roman calls me, for me it would be very nice. Do you know what it is if Riquelme calls you? Not only because of what Boca means or my intention to play at the club, but also to chat. I would love to be able to talk about football for at least 10 minutes with him.”

It’s always been a bit unclear whether the Uruguayan midfielder is really happy in England.

Despite a solid first season, he was heavily linked with a return to Italy within 12 months and his agent has been happy to play up the links ever since. There was definitely a dip in form and confidence under Unai Emery who insisted on playing him out of position – something that frustrated the player – but he’s seemed more settled under Mikel Arteta.

We don’t envisage him being a candidate to leave when the transfer window opens.

If my wife was openly talking about being with another man in future, but currently being very happy with me?

I’d see that as a warning sign, that there may be trouble in paradise, particularly if she was saying she’d love a 10 minute conversation on the phone “just to talk”…..

Footballers have a lot of dreams

I don’t have a problem with players saying that one day they would like to play for the club’s they support.
He is good but not necessarily a first team starter anyway.

He was flirting with the idea of going to Italy few months ago. Only perceives his relationship with Arsenal as legal. He has a contract and that’s it. He needs to improve his game while still with the club. That’s all I have to say.

He should be with us for the next season also, regardless whether we sign a midfielder or not…

Never understood why he fell out of favour. I thought he had a B+ first season as a DM, then suddenly Emery wants him to do a different role, he’s in and out of the team and linked with moves everywhere. It’s not like we have a better player in that position.

Yeah I think he’s quite simply our best midfielder. They shunted him around to accommodate Granit Xhaka…which ought to be some kind of crime. A fit and in form Torreira is one of few players in this team with the capacity to change games (positively, in our favour). But it’s pretty clear that he does that best from the base of the midfield. I still hope to see him and Ceballos as our double pivot and going forward that we sign a Ceballos-esque player to partner Torreira. The clutch of games he played alongside Ramsey were the heartbeat of some… Read more »

Xhaka is a deep lying midfielder and Torreira is a DM and they play well together. I can’t agree at all with you. I believe that Arteta is doing a great job but I am mystified at not picking Torreira every match. it certainly is not anything to do with Xhaka

Emery had completely lost the plot. Not sure he had one to begin with.

He is a great player, just unlucky with injuries and bad management. The other problem is most South American player dont adjust to life in England.

I could see him leaving as a way to raise funds for Thomas Partey, which I wouldn’t mind at all.

Surprised by the down votes. I think Partey would suit our midfield and England probably better than Torreira. I hope we don’t lose Torreira though, can we have both players? haha

The down votes are because you said we should sell Torreira. Yes Partey would be a great signing but not at the expense of Torreira

I don’t think I made it very clear that I want both players.

Up vote from me. Good for you for wanting to think outside the box, and suggest a possible improvement to our squad that is currently sitting outside the top 6. The ones who give you a down vote are in denial, and think every current Arsenal player is as good, or better than Messi, and we shouldn’t call them out, no matter what.

I like Torriera too and I don’t think we’ve seen the best of what he can do yet. I’d love to keep both, but how realistic is that? Given the option of one or the other, I think Partey would give us more of an edge.

Footballers have a lot of dreams.

Every player who joins us has a dream to leave for another club. We went through this crap with Fabregas years ago and Barcelona. If you have a dream to go to another club then dont come to Arsenal, or shut your mouth till the end of your contract. This is extremely unprofessional behavior.

Mr negative strikes again. Who are all these players we sign who wish to play for another club? Yes there is the odd one line Fabregas but to say every player is nonsense

Your uncle David Luiz for one to Benfica, Abu to Real. Keep your head out of the sand and you might learn something. What a troll….haha

I repeat an odd example doesn’t mean every player. You calling me a troll when you do nothing but slag off the team you claim to support ???

Naked Cygan i like to look at it this way: perhaps some players come to Arsenal thinking it’s some sort of gateway to something bigger or a stop gap club on their way to greatness, but most (I don’t mean to be bitter) who went for greener pastures did not exactly ‘ascend’.still, I believe Auba is a player befitting of a club like Madrid and Luiz is a good PL defender but old, he may as well go to Benfica right now. As for Lucas, i agree with you. I think his revelation is a little unprofessional or just not… Read more »