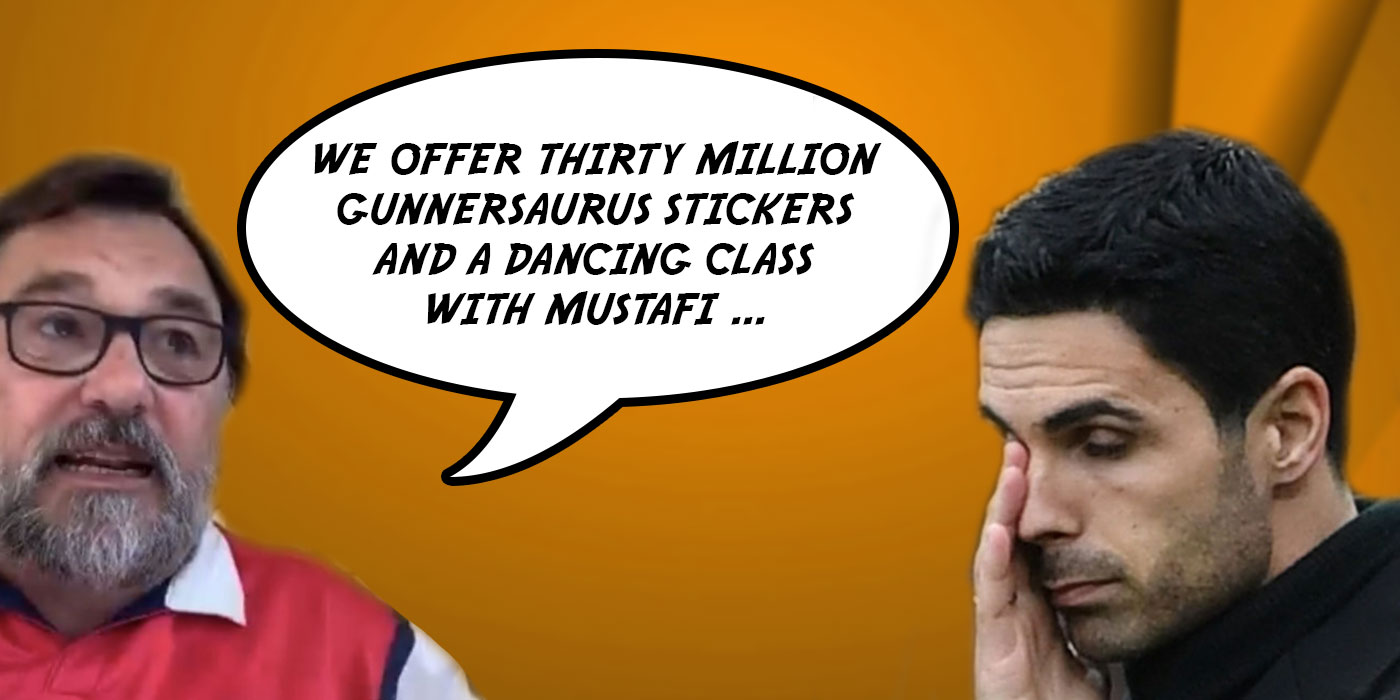 Let’s have the latest transfer tittle-tattle for you, collating all the stories so you don’t have to click lots of things which give you pop-ups, pop-unders, pop-outs, pop-ins, auto-playing videos and a virus for Windows 95.

According to James Olley of ESPN, we could be about to make his move permanent. This would mean him extending his current contract with Southampton on a short-term basis so Arsenal can then extend the loan deal with the Saints until the end of the season.

When he becomes a free agent we sign him to contract, believed to be three years for the 28 year old Portuguese international.

Does he get a signing on fee? Do we get another lovely picture with his representative Kia Joorabchian, we’ll have to wait and see.

This one does make some sense simply because he’s at the club now, settled in, and won’t cost us a transfer fee although undoubtedly other fees will be required to make it happen.

Via Sport in Spain, Arsenal were in contact with Barcelona over a loan for goalkeeper Neto because of the injury to Bernd Leno.

They’re not interested in that, preferring a €20m permanent deal instead which would be difficult but perhaps his agent … *checks notes* … Kia Joorabchian might be able to help broker a deal.

He also represents Philippe Coutinho, on Barcelona’s books for now, but a player the Catalan club want to get rid of this summer. It’s difficult to see us spending €20m on a keeper, but nothing we do would be that surprising these days.

Arsenal have a long-standing interest in the Brazilian who would be available for free when his contract with Chelsea expires this summer. He has committed to staying with them until the end of the season, but not beyond.

The link is made more concrete by the fact the player’s agent is … *checks notes again* … Kia Joorabchian.

Despite having young talent like Bukayo Saka, Gabriel Martinelli, Reiss Nelson and Pepe for the wide positions, it’s reported Arsenal are looking for added experience going into next season.

Via David Ornstein Arsenal like the Aston Villa centre-half, but the issue is whether or not they can match the valuation the midlands club would put on him.

This one feels a bit unlikely because his agent is … *checks notes* … NOT Kia Joorabchian.

The Poo-o-Meter is broken, don’t @ us. We’ve got to get the plumbers in.

Emre Can currently on loan at dortmund could be an option

I think we’ve had quite sufficient Emery’s recently thanks ?

Who’s in charge at Arsenal? *checks note * Joker and Chucky.

For some reason, I’m missing Arsene’s talk of :mental strength’ everytime we lost a game.

Sad, those running Arsenal have abandoned the strength and gone mental.

Was that Arsene doing an impression of Roy Hodgson?

when will we find out about contract extensions for Luiz et al?

I say bring back TGSTEL for one last hurrah!

Cant we just sign Kia Joorabchian to make it simple and organise kind of lottery during the transfer period where we would just pool randome Kia clients out of the hat and sign them for whatever fee Kia wants? Would be easier ?

When we hired that shit Raul.

Apparently, his middle name is ‘Sportage’.

I would prefer if we’d approach Bayern for one of their three quite highly rated goalkeepers for next season.

‘A dancing class with Mustafi’ LMFAO.

No Kia, no Partey.

Would be an interesting signing.

I watch Bournemouth a fair bit in between our games. Mings was a disaster down here. Signed with great fanfare, bolloxed his knee on his debut and never remotely looked like a PL player. It was a major surprise that he seems to have found some form at Villa, but we can surely do better.

Is this a new Arsenal transfer tactic? Signing players years after we are first linked to them at 4/5 times the amount they were supposed to cost at the time? Hopefully it works out OK with Tierney.

I like him…would love to see him with Saliba, just a pipe dream though!
Surely we can do better?? This is AFC we’re talking about! We’ll probably end up with a washed up has been!!

Any word on the situation with David Luiz? Today is the day his current contract expires …

A swift kick out the door with any luck

You’d assume so, but the silence on that front (combined with Arteta’s endorsement) is beginning to make me wonder …

If we were a new Arsenal and our owners were serious. We would get the Partey deal sorted now. A culture shift is also needed in how the club is run.

This club needed Sven Mislintat, his approach is exactly what is required for this club b’se these super agent shit is for clubs with bottomless pockets. Letting go of Mislintat is one of the biggest mistakes in recent yrs

We can get Sven only if his agent is Kia Joorabchian.

He wasn’t exactly “let go of” though was he? My understanding was that he was forced out, largely by Raul.

One Sven seems to be worth more than the sum of Edu and Raul.

We didn’t let him go. He left because of the other numpty’s using a ‘contact based approach’. Infuriating

None of the players listed will improve Arsenal.
What we need is an owner that will invest, not one that will shrink from spending money and view bottom profit figures as performance targets..

Right, right.
So along with our beautiful passing game, class, and one time defensive solidity, we should also dump being a self-sustaining club and join the ranks of the blood money run citehs, chelseas, spuds and the rest?

That maybe a different thread you’re looking for.

Hate to say it, but can we really lump spuds with citeh and chelsea? At the moment that lot seems to be doing a better job on this self sustaining business model.

if you wait another decade or two we might be snapped up by some oligarch-dictator. There’s something to look forward to.
On the other hand, by then football may be over and surviving the climate collapse might be the only game in town.
Either way, it’s a win win.

If Arsenal give David Luiz another contract, then fk this club. Letting him play another game for us is an absolute joke and insult.

I am sure Kia doesn’t need us to play him again. Just signing and paying him should be sufficient.

Elneny back from loan ?

Is that possible, Turkish club not playing him …

I think spending significant money on another keeper makes sense.
Assuming we are allowed to play more than one at a time.

Sigh….I wouldn’t say no to willian on a one or two year deal to help tie us over. But we all know how agent Luiz has got on. Ming’s? I don’t know much about him. Neto for 20 million no thanks. Rather keep emi and macey until Leno is back. Cedric is a decent back up to bellerin but that’s it. And even bellerin has been poor defensively since he came back. In short there, either AMN is moving to midfield or Arteta is getting rid of him.