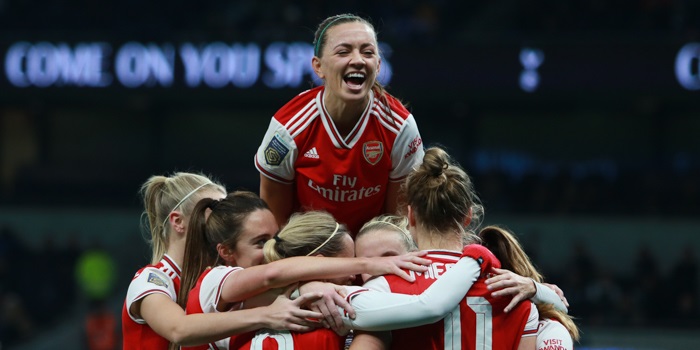 Over the last fortnight, Arsenal have added four internationals to their squad ahead of the 2020-21 season. Australians Lydia Williams and Steph Catley join Swiss duo Noelle Maritz and Malin Gut, with Caitlin Foord arriving in January. Meanwhile, Katrine Veje, Danielle Carter, Louise Quinn, Pauline Peyraud-Magnin and Silvana Flores have departed, with Emma Mitchell’s departure expected to be announced once she has an agreement with her new club.

So how do the new recruits alter the dynamic of the squad? They don’t alter the size, with Joe Montemurro maintaining his preference for smaller squads with lots of versatile players. [I spoke with Joe in detail about that last season]. However, players like Dan Carter, Emma Mitchell and Tabea Kemme have now departed, all of whom have made single digit appearances over the last two seasons. Replacing them with fit players represents squad expansion. Let’s look at how each player might fit into the squad.

LYDIA WILLIAMS
Lydia will act as a replacement for Pauline Peyraud-Magnin, who left for Atletico Madrid this summer. Joe likes to rotate his goalkeepers. This is partly because he doesn’t like players to be disengaged but it’s also based on his footballing philosophy. “Pauline’s long distribution is very, very good, whereas Manu excels in smaller spaces with shorter passing,” Montemurro told me in November.

“We’ve done that by design so that we have both options. They have to understand phases of play too, when we’re in the build-up phase or when we’re mid-block defending- they both play a big part in that.” Williams is more adept with long distribution so she will take PPM’s role in more than one respect. At 32, she is also very experienced but probably hasn’t had this level of competition for her place in some time. Challenging Manu Zinsberger ought to be healthy for her.

Williams has joined on a 1+1 contract and I would imagine her Arsenal future is tied into 19-year old Fran Stenson’s. Stenson spent last season on loan with Blackburn Rovers but is very highly rated and seen as a potential future number 1. She will likely go on loan again this season and how ready Arsenal feel she is to join the first team will have some bearing on whether Williams’ deal is extended next summer.

Lydia Williams led all starting goalkeepers this season in clean sheets and save percentage. Vote for @lydsaussie for @NWSL Goalkeeper of the Year. Voting for the NWSL Awards ends tonight at 8:59 p.m. PT.

STEPH CATLEY
Steph is Arsenal’s most eye-catching addition this summer. With Emma Mitchell and Katrine Veje having departed this summer, the Gunners needed a left-back and they have added a genuinely world class one. Last season, Katie McCabe moved into left-back and did an excellent job. However, Catley will almost certainly be the established first choice there now.

Swiss signing Noelle Maritz can also play at left-back, so McCabe will likely be freed to challenge for one of the wide forward spots. Katie can play as an inverted winger on the right or on her more natural left-side. Catley is a very modern full-back who likes to attack, has an eye for a pass and is technically outstanding. Her left-foot is one of the best in women’s football.

64' – @stephcatley with a great ball over the top to @alexmorgan13 who hits a brilliant strike to give @ORLPride a 3-0 lead. #ORLvWAS pic.twitter.com/EmtPFcggDk

NOELLE MARITZ
Maritz is still only 24 but after seven years at Wolfsburg that saw her lift five Frauen Bundesliga titles, six DfB-Pokals and a Champions League, she is already very experienced at the highest level. Maritz is an international teammate of fellow new recruit Malin Gut and midfielder Lia Wälti. One of the curiosities of this multi-national Arsenal squad is the “colonies” within it.

There are two Austrians, three Swiss players, four Scottish players [though Mitch is soon to leave], three Dutch players and three Australians [along with an Australian manager and assistant manager]. Leonie Maeir might be the only German at the club, but Zinsberger, Miedema, Wälti, Roord, Maritz, Evans and Schnaderbeck are all German speakers.

Maritz is a versatile player who can play in either full-back position or at centre-half. With Louise Quinn departed, Arsenal haven’t yet recruited a specialist centre-half to replace her, so Leah Williamson and Jen Beattie will remain the first choice partnership with Viki Schnaderbeck the back-up option. Maritz, Catley, Walti and Gut can all play at centre-half too. Maritz adds depth to Arsenal’s defence.

Good luck in the future! You will be missed! ? pic.twitter.com/MQo89YbZwn

MALIN GUT
Gut turns 20 in August and essentially operates as Lia Wälti’s back-up at international level. Gut is a ball playing defensive midfielder in a very similar mould to Lia. This fills an obvious gap in the squad, there has been no specialised cover for Wälti since Dominique Bloodworth left for Wolfsburg last summer. This meant Leah Williamson often had to move into midfield when Wälti wasn’t available.

Gut’s presence offers that cover and rotational support for Wälti who suffered a knee injury in her debut season and a grade 3 hamstring tear last season. Montemurro admitted back in February that Lia’s hamstring problem was possibly down to being overplayed. Gut will be the youngest member of the first team squad, assuming Stenson goes out on loan.

OVERALL
Joe likes flexible players to fit his tactical schemes and he has a clutch of very versatile players to choose from. Having been at Arsenal for two and a half years now, this is very much his squad now. Joe has focused on getting the age profile right too with most players nestled in the 24-28 age category.

Thank you for the great overview of the new signings! Excited to see how the Swiss colony will perform (as a Swiss myself). Do you expect the transfer business to be done for the year? Or could something on the offensive side of the team be expected? And will there be call-ups from the academy?

I think there will be another addition but not necessarily a blockbuster one. Mel Filis is staying and Ruby Mace was involved with the first team squad last season, so should be again this. But the academy is difficult to forecast because the players turnover pretty much every year and the info on who is actually in the U21 team is very difficult to find.

Talk about player flexibility, Tim. Caitlin seems to have put her name down for every position except goalkeeper! I think if she was truly flexible she should have a game in goal at some point during the season. Perhaps one of the early Conti Cup games vs Accrington Stanley Women or similar? 🙂

Yeah, Caitlin is really versatile. She made her breakthrough for the Matildas at the 2011 World Cup playing right back, and played right and left back in 2015 (against the USWNT, Steph Catley played centre back and Caitlin was at left back…it didn’t go well).

She can pretty much play anywhere aside from centre back and maybe not one of the deeper central midfield positions.

I’m all for versatility but I think I’d prefer to see Caitlin up front ramming home a double figure goal tally to compliment Viv’s Bergkampesque Golden Boot! We have plenty of specialised talent to fulfill defensive duties.

This years signings seems like a completion of the team. The spine of the team didn’t change, we added players to the wide areas and after 2 years playing fowards as fullbacks we now signed two very high quality ones. Because core of the team stays the same, it shouldn’t take much time for the new players to click with rest of squad. We just have to hope that we don’t lose half the squad for January. But even Arsenal deserves a break from injury plague. I can’t wait for games to start. Excited to see Catley play for us,… Read more »

This is a superb squad and one that can genuinely challenge for European honours. As you say we simply need to keep them all fit for an entire season!

More flexibility than Michellin Man.
What a boost that the newbies are to be included in the CL finals week.
We fans should have a sweepstake to see who can get nearest to Joe’s team selection for the first game ?