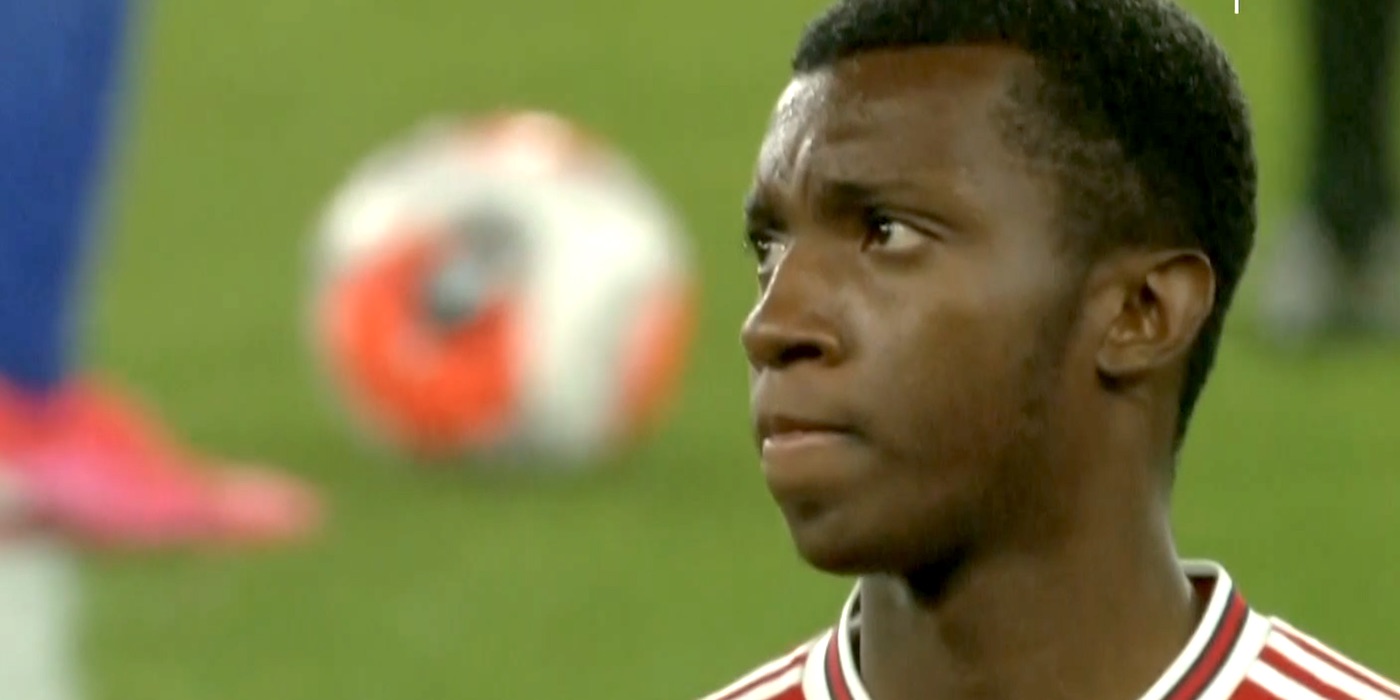 Mikel Arteta has revealed that Eddie Nketiah apologised to his teammates after being sent off in the 1-1 draw with Leicester but was quick to absolve the young striker of any guilt.

Nketiah had only been on the field of play for a couple of minutes when he missed the ball challenging for a 50-50 ball with James Justin.

Initially shown a yellow card for making contact high up the Leicester defender’s leg, the punishment was upgraded to a red after referee Chris Kavanagh consulted the VAR monitor on the side of the pitch.

Leicester went on to equalise through Jamie Vardy’s 84th-minute strike as Gunners legs tired in the pouring rain.

Nketiah looks set to miss the league games with Sp*rs and Liverpool and the FA Cup semi-final against Manchester City. It’s a big blow for a player who has been important since returning from Leeds.

“He’s disappointed,” Arteta told his post-game press conference. “He’s said sorry and he doesn’t need to do that.

“I know when he goes for every single ball it’s because he’s so willing to win every challenge, be on the front foot in every action, he didn’t see the player coming up and obviously he doesn’t want to hurt anybody so… It’s part of the process.

“They are really young, they need to learn from these situations and hopefully, it won’t happen again.”

Arteta says he also expects the squad to rally around the 21-year-old.

“Absolutely, I think we all have to support him and there are a few things that happened that meant we didn’t win the game, it was not just that action.

“Obviously against top opposition, playing with 10 men, you make it really difficult for yourself and it’s something that we have to build on as a team.”

While Arteta accepted that Nketiah’s challenge could be deemed a red card, he was obviously furious at what he adjudged to be double-standards from the officials.

Just before half time, Shkodran Mustafi suffered nasty cuts to his face after Jamie Vardy tumbled to the ground and swung his foot at the German. While VAR reviewed the incident, the referee wasn’t advised that it was worth looking at himself.

Asked to compare the two flashpoints, Arteta said: “What I’m saying is that if we review incidents of that type, it [red cards] will be the norm.

“It has to be something equal for everyone because it changes the game completely and if Eddie’s is a red card, then for sure the other one is a red card.”

For their goal, it was borderline enough to give the advantage to the striker.

Except that in all cases this season that has not been the case. You are offside or not they have said.

FIFA rules are going towards giving the advantage to the striker and you can count on Wenger for this.

Vardy’s wasn’t just clumsy, it was nasty. Eddie’s red was a clumsy, potentially dangerous challenge. If one is a red the other is. No excuse with VAR.

The weird part is that the ref viewed only one angle of the incident.
From the side and even from the live camera you could see that he was very close to the ball and he didnt apply pressure to the knee.
VAR is just a new method. Only the people using the tool should be judged

Both incidents appeared accidental and dangerous therefore both should be treated the same………apparently not.

The kick was no accident.

They don’t look at the bigger picture. Debuchy Arsenal career was ruined by Arnautavic push.
Mustafi could have had serious eye damage

Ive seen Luiz get sent off for a pen, straight red and in the next game the same challenge getting a yellow and a pen. Its a disgrace. their defender turned his back almost on the challenge to shield the ball coming around him….Vardy’s was a red for sure.

Not sure ‘admonish’ is the right word there (= warn or reprimand someone firmly).

Absolve is the word

Alarming to see a part of the fanbase turn on a 21 year old for a immature challenge
While a 29 year old senior pro missed chances after chances to put the game to bed and gets clapped on by the same part.

I can’t see any fanbase turning on a 21 year old. Which reality are you living in?

I heard many fans saying he couldn’t even start at Leeds.

Yeah but Vardy isn’t that kind of player, much…

Lol – I don’t know how the refs didn’t call it, I mean Eddie is still a relatively unknown quantity to refs in the prem, but he doesn’t exactly play the game in a jammy way, so can’t have a reputation for wanting to do the other player in.

Vardy on the other hand has always been a scrote.

Eddie was unlucky, it could have easily been a yellow, otherwise VAR would have suggested a red without telling the ref to decided. You could tell there was no intent to harm the player, he was going for the ball and missed timed the tackle. From what I remember, the player was fine and played right after. We have been screwed by VAR many times, and this will not end unless all clubs are treated equally and the rules apply to every team.

The player was fine, yes, but that argument is void, because Mustafi was also fine and played on.
What’s important is, that the Eddie and Vardy scenes, they need to result in the same punishment. Red or yellow, whatever the ref likes, doesn’t matter, that’s his “line” to call the game. But they didn’t What a shame.

The game would’ve been done and dusted, if Laca had made one of two chances created for him, instead of shooting directly into the keeper’s circle of influence. Vardy is red for me, if Nketiah is red. Both can claim innocence, though Vardy, I think, was being deliberate just to stick a foot in. I don’t think he expected it to be in the face though.

The issue is not the red card as such, but the deliberate inconsistencies in the applications (based on the target clubs). Very corrupt system that are so determined not to allow VAR ruin their predetermined control over the games.

If I am his teammate or coach I’d take his apology. If I am his close friend I’d be pushing Eddie to hit 20 in the league next year at every moment we talk about his first red. What’s done is done and he’ll learn from it.

Now we don’t need any apologies, just try to put them in the net as often as possible.

The other thing that adds to the frustration is that Eddie’s challenge became a red primarily because of the potential for that type of challenge to be a leg breaker. It wasn’t a red because of excess force, malice, intent, etc. but simply because this type of challenge carries the risk of causing injury. What the regulations are asking of the players in this instance is to be in control of their actions so as not to put their opponent in danger, regardless of whether contact is accidental. By that standard the Vardy challenge is also definitely a red card,… Read more »

Just to highlight what kind of damage the Vardy challenge could have caused: a friend of mine suffered an eye injury in a similar situation. Had to get his eyeball surgically reattached…he’s fine now, but the doc said he easily could have lost his eye in this situation. Even the recovery sucked. Was on bed rest for 3 weeks with BOTH eyes bandaged (to prevent the injured eye moving in tandem with the good eye before it was sufficiently healed). Imagine that, 3 weeks of bed rest, can’t even watch TV or read or anything. Just alone with your thoughts,… Read more »

What frustrates me about VAR is that the referee made his decision in real time and could see Eddie was following the ball over his shoulder and only had eyes for the ball. What we saw repeatedly through VAR was the split second when he made contact with the player’s leg. The ref then saw this twice and changed his mind. If he’d seen the build up a few seconds previous then it might have reinforced his original decision.

Was a red card for sure. And it has cost us as we slip back down to 8th (prob 9th after Spurs play tomorrow)

Critical we win on the weekend in the NLD.

Snakes and Ladders but damage done to us before this run.

Eddie is 21, probably been playing football for about 14/15 years at a professional club (taking into account that clubs pick up kids very young), so all of the talk about him being young and will learn is just nonsense. Lets get this in some sort of perspective, had one of the Leicester players made that type of tackle on one of our players, we would have demanded he be sent off, it’s a potential leg breaker and the way the tackle was made, was probably deemed to be out of control. I have no argument with the referee for… Read more »