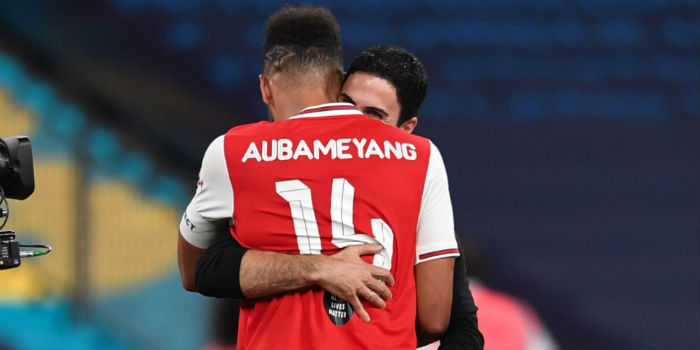 It remains unclear whether Pierre-Emerick Aubameyang will commit to a contract extension at Arsenal but Mikel Arteta is hopeful that moments like last night’s FA Cup semi-final victory against Manchester City can play a part in persuading his captain to stay at the Emirates.

Aubameyang underlined his importance to the Gunners with a brilliant brace at Wembley that secured a momentous 2-0 win and a place in this year’s final.

Already into the final year of his current deal, there’s a chance, if we decide we can’t risk letting him leave for free in 2021, that the match could be the player’s last for us.

Arteta is hoping that won’t be the case.

Asked in his post-game press conference if big wins can help persuade the Gabon international to stay put, the boss said: “I think it will help everybody. These beautiful moments are always better than the bad ones and when I look at him and speak to him he sounds pretty convinced.

“Obviously if he can see the success and direction that we’re taking is the right one, I think he will be more positive about it, yes.”

Arteta also touched on how the team is growing closer together, something he believes will be the bedrock of any future success.

“They are so happy because we had a big task in front of us today against such a big team and we’ve done it, so they are really proud.

“The chemistry we are generating between them is fantastic and the way they are fighting for each other too.

As he’s said repeatedly, Arteta’s ability to strengthen the squad this summer will depend on whether he can secure a Europa League place. While nothing is decided, the fact we’re still competing on two fronts is a reason to be positive.

“Listen, we have had a lot of conversations and we always agreed with the plan that we have in place, and the current vision is very clear.

“It’s about the possibilities that we are going to have and at the moment we have some uncertainties.

“The way we finish the season, if we are in Europe or we win it [the FA Cup], it will obviously help because financially we will be stronger and that’s why we have to be a little bit patient.”

Every single game Aubameyang makes that run that led to the second goal but no one ever finds him. If I find it frustrating I wonder how he feels! Our players have to be intelligent enough to look for it and find him, and even if they aren’t surely they could be coached to do it?

Exactly, thought I was the only one who notices. And to think that’s literally his strength! Get more of those passes to that man!

Too Drunk To Be Offside
Reply to  Duno

If Chelsea beat United in the 2nd FA Cup SF, and claim UCL spot by way of league position, then does that mean Arsenal will be in the Europa League regardless of the FA Cup Final outcome?

It doesn’t. It only goes to the next highest ranked team in PL not in Europe. Thats why finishing 7th is so important or winning the FA cup. Or if Man Utd or Wolves win the Europa league…then 8th placed finish will be enough. Correct me if I’m wrong.
And Leicester did not do us or themselves any favor today…smh

If Auba commits, I have a good feeling next season is gonna be a fun one

FA Cup final, Auba scores the winning goal, takes us in to Europe, celebrates by miming a signature.

You heard it hear first.

Without his goals, we would be relegation fodder, simple as that. Winning the FA Cup might just persuade him that there is a genuine rebuilding program at work. If he has to pick up a losers medal because Mustafi and Co have screwed up yet again, then he might well feel like plying his trade in a club with at least a half decent defence. Fingers crossed that we can beat Utd/Chelsea.

Glass always half empty then ?

Not at all. Just a few little home truths to balance out some of the fool’s paradise rhetoric currently on display. This week’s results have been superb, surprising and most welcome; but, as usual, some individuals have gone overbooked and would have you believe that we have Invincibles II on our hands. Auba, unlike more than few posters on here, is no fool. ?

No team is perfect, and your spelling out our players faults everywhere only serves to reduce his potential market value.

Glass half full and trust Mikel to steer the ship to wherever he sees fit and with whatever personnel he chooses. Otherwise you’re just the embodiment of misery loving company . Share positive vibes

Per Wikipedia: FA Cup winners enter the Europa League at the group stage. Losing finalists, if they had not qualified for Europe via the league, begin earlier, at the play-off or third qualifying round stage.

Aren’t we in the Europa League already due to getting in the FA Cup final??

Technically, the Europa League begins in the group stages. The qualifying knockout round is merely that, the chance to qualify for Europa League. So no, we need to win the FA Cup to guarantee our place in Europe and secure some more funds.

Seems little chance we would fail to qualify

Please stop this discussion about getting into the Europa League through the back door. It is quite humiliating. We just have to concentrate on the league next year.

Did you eat skittles

So if Man utd or Chelsea finish in top 5, and Arsenal lose FA Cup final 7th Place will qualify for Europa League, as City won League cup…. I think.

It’ll likely take more than that. Certainly Auba seems to be well settled at Arsenal but at 31yrs and into last year, this will be his last opportunity to seal a big move to a CL club and win things. So realistically it maybe unlikely. PLUS we have to consider whether it is worth the while to up his salary and depreciate him further at 31yrs instead of sell and re-invest into a club that needs construction. Realistically, Auba will fetch the biggest sticker price for us now. I think its unlikely we retain him and a risk. That said,… Read more »