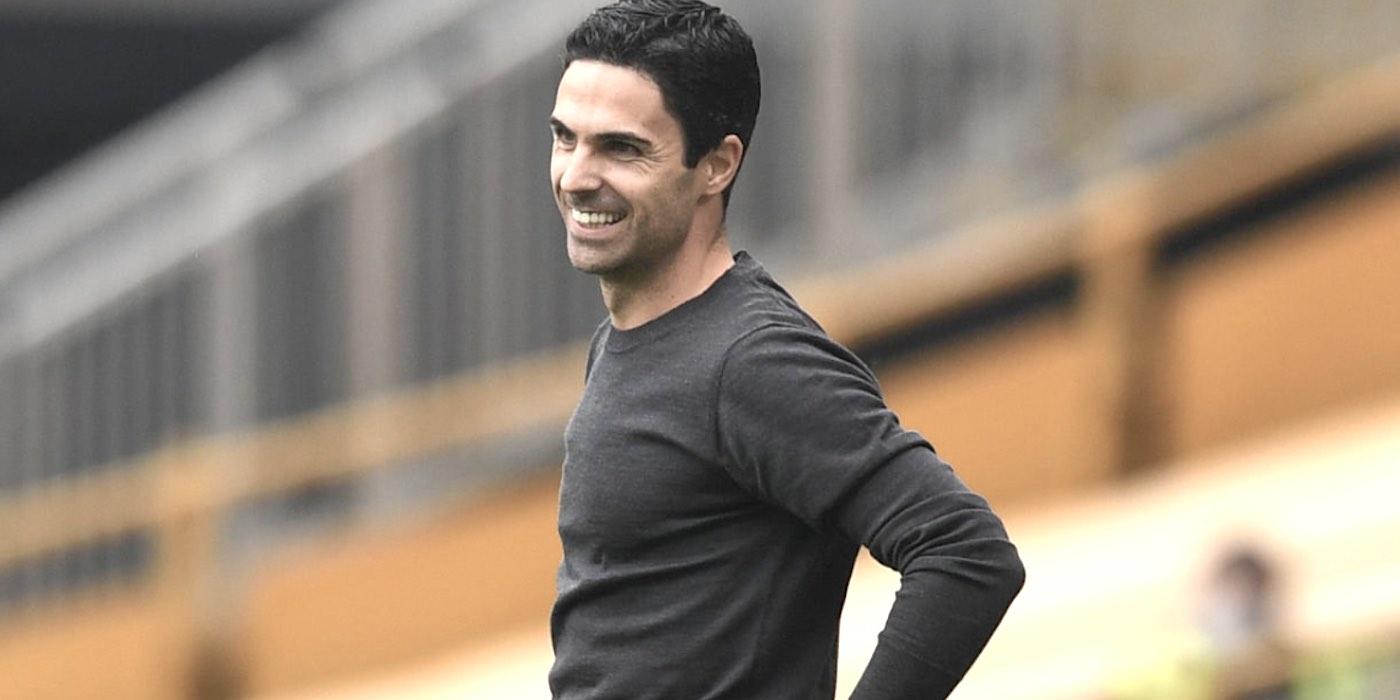 Mikel Arteta says that his team are being rewarded for the effort they’re putting in, after the 2-0 win over Wolves this evening.

The Arsenal boss has got his team back on track after two defeats following the lockdown, and we’ve now won four in a row.

It’s clear this team is very much a work in progress, something Arteta is conscious of, and he knows they can’t dominate the opposition right now, so have to find another way to get results.

Speaking afterwards, he said, “I think the reason we can win against any team is because at the moment we are enjoying suffering together.

“In difficult moments, if you can enjoy doing that then you will get rewarded because we have the ability afterwards to hurt teams.

“At the moment, we don’t have the ability to batter teams for 95 minutes. If you are not able to do that you have to be very able to compete and be a team.

“A team means that the 11 who started and all of the subs really make a difference in the game.”

It was the Gunners fifth away game in the six they’ve played so far, a gruelling schedule by any standards, but the boss is not out to make any excuses for his players and the physical effort they have to put.

Asked if the fixture congestion was going to impact his team, he said, “I don’t want to talk about that, it’s all in our head.

“We have everybody ready. You can see the players on the bench, how ready they are to come and make an impact.

“It’s clear that we have to rotate the players if we want to get the maximum and we have to protect them as well.

“Whoever is available is welcome and we will use him.”

Love how he talks about things. Warriors mindset.

Hes an arsenal man. Just a shame we had that few months break. I’m confident we atleast would of got 3 points for Brighton if we weren’t so disrupted.

Cant say we would of nicked a point at city, but the signs are there for improvement.

Make no mistake we are not where we are so low on the table because of Arteta. I’d actually be worried where we would be without him.

11 Shades of Grey?! Actually, the players did look happy today and seemed to be playing for one another more than the record book. A good away result against a formidable opponent.

As if he needs to spell it out anymore, seems like the summer transfer window will be crucial. I feel like Arteta knows exactly who needs to come in and leave, he has very clear ideas about what he wants and has the backing from the board.

If you listen to how he speaks, and Edu as well you get the feeling they know exactly what to do and understand the mess we’re in.

Arteta continues to impress! After a bit of a shaky restart, he seems to be pushing all the right buttons. Hopefully he and the players can continue this strong run to end the season!

It may not be dominating or pretty but it’s, for the most part, much more organized and you can see the plan and what he’s trying to do. I’m excited for the future once again. Let’s secure some European football and another FA Cup success! COYG

Whoever is available is welcome and we will use him.”

I have to say Mustafi has been a much, much player under Arteta. He isn’t the best defender, but he has turned a corner.

He’s been OUR best defender since Arteta took over. Very rarely loses an aerial duel.

Maybe now we can sell him for the fabled 50 mil.
Ges been doing well credit to him, but i cant help but have the lingering feeling that something’s just around the corner with this guy.
Selling him is better for my heart.

Agree. He is much better, but if you watch him carefully, he is still mistake prone and many of the ‘near things’ that we suffer are a direct consequence of his or Kola’s competence level. Two we wouldn’t miss.

We have been suffering as fans over the years going from the amazing invincibles, to the top 4 team, top 6 team, now out of the top 6 team. We deserve to be rewarded, let’s hope the wins keep coming and the momentum continues.

We have been suffering

Talking about suffering, Auba has played every min after restart. Running up and down that left flank. Great Recovery! He is too important to not to start!

Let’s see how he manages next couple of games!

He didn’t play cup game. But he has played a lot. Amazing athlete

He was also subbed off Vs Norwich, but he played most of that game to be fair and like you say, basically every other minute. Leading by example ?

He looked keen to come on though. Amazing commitment.

“Whoever is available is welcome and we will use him.”
Very welcome to have Torreira available. I’m looking forward to his goal against Spuds

Time to start respecting Arteta. He finally got back the form the team had just before lockdown. Toxic fans were calling for his head after the two losses against City and Brighton. But if you are a real fan you will remember well that before lockdown we were unbeaten in 2020, that means we only lost 2 PL games in 2020 and Artera as manager of Arsenal only lost 3. For me that’s a lot of improvement. Arteta did a lot of off the ball work with the players, we are defending as a team and the players are working… Read more »

People that called his head after those two games doesn’t love our club??‍♂️

These last games bring a bit cautious optimism back and thats the light at the end of the tunnel, I believe. It is very clear that Arteta knows what he is doing and what he wants to achieve. But there are several obstacles in front of him: He Operates with basics, we don’t have a well balanced squad. Also, the situations with Ozil and Guendouzi are an obstacle that he tries to avoid and not depend on them. That’s an effort by itself. We may have central defenders in numbers but we dont have two centre backs that can unleash… Read more »

Also talking about suffering, last decade was our probably worst decade in last 30-40 years. Since 1980’s at least. I’m glad 2020 has started better!

Long road ahead though, but i believe in arteta!

Kanu Believe It
Reply to  JohnArsenal

And we still won 10% of all available domestic trophies in that past decade.

Our worst decade in 40 years is still better than the Scums best in 60. Brilliant.

He’s cracking the whip which is great. Telling some players have been left out be they fitness or perhaps otherwise. No room for slacking. Willock indeed preferred to Pepe who tends to lose the ball too much. with Auba also guilty, two at the same game can be disastrous with teams like Wolves let alone Liverpool, Leicester forthcoming. Also missing Guendouzi whom if he isn’t careful will lose spot (if not as is) to the ever willing and hungry Willock really grabbing his chance by the bollocks. and Ozil prob still recovering but frankly if he cannot match work rate… Read more »

Make no doubt, the win against Wolves was a bit of flattery which we had to keep grounded against.

BUT this was a big win against a strong Wolves side.

and the clean sheet. We have bigger test to come to convince the doubters but a significant step up today.

Enjoy suffering? Hmm… A strange one to decipher but whatever that means, it does seem to be working. No doubt Arteta is great. But will he be sufficiently supported by the higher ups?

Before the game if anybody had offered a draw,I would have gladly taken it.
It no easy task to beat Wolves at their lair but credit for a battling performance. 10 goals scored and one conceded ,against two quality sides.What more can you say.

Arsenal were at times tentative not as fluent as top teams. Anyway beating Wolves aint easy. Traore was well shackled .Under Wenger he would be unplayable and we could have conceded buckets of goals.
Willock was pushed at the half way mark . I have seen free kicks awarded for
this type of offence.
I think its about time refs are made accountable for their decisions.

This was our first away win since 2015 to a team that is above us on the league table!! Big big result!

Wow willock is fast turning into a super sub!

Four observations: 1) Resilience – we seem collectively to be able to withstand pressure better. Haven’t seen this for a long time. Everyone knows their roles and working to ensure they meet the required performance levels. 2) Options – MA has options in every position and is seemlessly swapping players in and out for the benefit of the team. Players who are being used understand this and again give performances for 5mins or 90mins – whatever is asked of them. 3) No excuses – Leno, Mari, Martinez, Chambers all out injured – players just stepping up and taking responsibility. 4)… Read more »

Not wanting to dig out Emerys lack of English but Love the fact we now have a manager who makes sensible statements we can all understand and get, belief factor starting to return..

I think someone needs to explain to Arteta that “suffering” may not be exactly the word he’s looking for..instead, maybe “hard-work”?