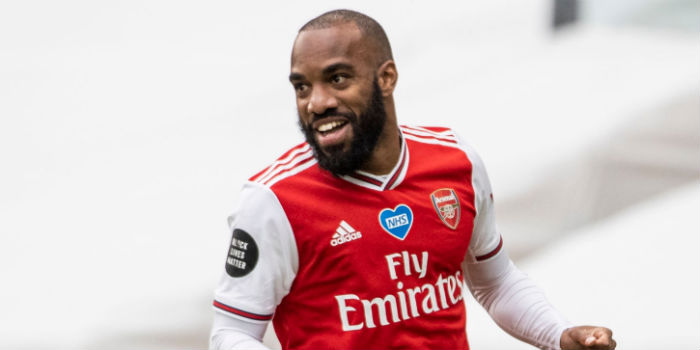 Mikel Arteta admits that Alex Lacazette was in need of a goal and hopes his teammates can keep giving him more opportunities like the one he took in this afternoon 2-0 win over Wolves.

On the pitch for only three minutes, the Frenchman delivered a decisive blow late on at Molineux, latching onto a cross from fellow substitute Joe Willock before finding the net off the post with a well-placed drive.

Today’s goal takes Lacazette to double figures for the season and while he’s struggled to hit the heights of last season, the boss was quick to praise the 29-year-old’s attitude.

“Well, he really needed that, but when I asked him to come in, in three seconds he was ready to jump on the pitch,” Arteta told his post-game press conference.

“Things like this happen and he had a great movement of the ball, a great touch and a great finish.

“We need to give him more opportunities to be able to do more of that, but I’m so happy for him because he completely deserves that for the way that he trains and plays every day.”

After a fourth consecutive win, Arteta believes his squad are building much-needed momentum as they look to secure European football next season. Up to seventh in the table, the gap on Wolves has been closed to three points ahead of massive matches with Leicester, Sp*rs and Liverpool.

We’re going to have to win all our games if we’re to have any chances of making the Champions League and even then things won’t be in our hands. For the moment, the boss just wants to keep his players focusing on the short-term.

“I am in the race to try and win against Leiecteser and then let’s see what happens,” said Arteta.

“Two weeks ago it looked impossible and we know the fixtures that we have in the next few weeks… We try to improve as a team every time to give us a better chance, the better we play the better we compete.

“At this level of intensity if we play like this against any team we will make it hard from them and then we will see.”

He added: “That is probably one of the best [wins] because of the difficult schedule that we had compared to them in terms of the recovery. And for how well they have been doing for the whole season and because of COVID-19.

“To come here and win the way we have done today is not an easy thing to do, it’s another step forward in our process so I am really happy today.”

Really good goal. The shimmy, the touch and the finish were exquisite. He also made a nuisance of himself when wolves were tiring. I still don’t think he is 100% yet but that should give him the lift he needs for a strong finish to the season

Aaronopherenia – The ability for a besmirched player to do one good thing and be world class again.

That was a world-class goal though don’t u think?

Yeah but it’s not the one good thing he’s done for us though is it? Admittedly he’s been pretty bad this season, but he still has the class to offset that

Well let’s look forward to Laca turning the corner here so we don’t have to read wet blanket comments about a simply well done play for a bit.

Y’all are nuts man, Laca was player of the season last year. Always busts his ass whenever he’s out there, drawing fouls and getting no calls. Works for the team. He’ll come good but he deserves better than y’all on his back.

I bet you’re also glad Ramsey is no longer with us. Lame brain.

The goal was a classic Laca goal. I’m happy he finally scored, he does so a lot of unrecognised work that people don’t give him credit for. Player of the year last season, and you guys are just discarding him because he doesn’t score every game.. Assists, hold up play is as important. And he’s a good striker to have come of the bench. just because we don’t have a lot of money does not mean that we should just sell our best players. I don’t want this to end up like the Giroud-situation, were he goes to Chelsea and… Read more »

I said we needed to keep the faith with him and that he just needs a goal or two to get his confidence back. All strikers go through a lean phase, even world class ones.

Seems Nketiah’s competition has really lit a fire under him. More smart man-management. I do like him a lot and will be hoping for a performance like last years Leicester at home.
https://youtu.be/TyE3cP27VoY

God is a Gooner
Reply to  backsakacrack

Holy f’ck Ozil was on a different planet in this game
I’d forgotten quite how good he can be. What a shame it’s now a wasted talent we have, I just hope he buys into Arteta’s vision at last and ends his time here with dignity

Johan
Reply to  God is a Gooner

That pass to Bellerin is one I’ll never forget. World class!

Take it easy, mate. You’ll upset the Muppet Show on here who have been heralding from the rooftops how ‘useless’ and ‘lazy’ Ozil has been ‘in the past few years.’ That’s Ozil’s game – the killer pass. Just because he’s not running around like Brian Talbot on a few grams of speed, he’s apparently no longer useful to the team. I guess it’s a case of what you know about the game. Some people’s grasp of the game on here is embarrassing.

And THAT is what we’ll need at Wembley in the FA Cup Semi against Man City. To leave Ozil out of that game will be unforgivable. I’ll have no sympathy for Arteta if we lose.

Qwaliteee
Reply to  God is a Gooner

There’s quite a few people on here who would do well to have a look at that link. Then again, it would probably go over their heads. You can’t educate those with shit for brains.

I wish he was, but havn’t seen it in a while. I would love if he proved me wrong. Consistency has been his downfall.

I thought he was gonna win us a championship when he signed..

He can’t carry the team. His back clearly isn’t strong enough. Besides, Alex’s did the heavy lifting not Özil.

That Leicester game reminds me of Kanu’s hat-trick vs Chelsea. It was an unofficial sign-off moment. People like Qwaliteee hold onto it, but ask them to pick another game before or since with a similar Özil performance for Arsenal, and they struggle.

With the effort they put in up top, I always feel like Laca and Eddie deserve a goal. They’re always hustling and harassing the opponents and I love it.

Super happy for Laca and his extremely well taken goal!

Came on with immediate effect. Took high balls and controlled them better, also lay offs and use of the ball telling over the energetic but more inexperienced Nketiah. Coming in late on with Wolves legs getting weary also added some advantage but in the end a very very good touch to turn his marker for his goal. We will need him. He is the best in that front role for holding the ball and retention, something we I felt struggled with for 20 off minutes first half where we rode our luck and were under the cosh with insufficient outlet… Read more »

That goal was amazing!! Arsenal needed that goal and that win.
Next stop, Leicester!!COYG
P.S. No Guendouzi today. Predictions were more than a bit off…sorry. Let’s hope we see him vs. Leicester!

Laca fucked that dude up at the near post. Great first touch/turn

Martin Nelly
Reply to  The Arsenal

Qwaliteee
Reply to  The Arsenal

That’s what he can do. ? Superb player.

Great goal at Wolves, but I can’t see Laca being a goal machine with the way this team is set up. It just doesn’t suit him and I’d prefer time for Martinelli and Eddie.

A real Ian Wright type goal. Sets both centre backs up so they think they’ve got him covered, then in a flash he’s nicked the ball into space and Bam!
Lovely.

Happy for him. Hopefully he can push on now right when we need him.

Do The Wright Thing

That Mustafi header in the build-up. Phwoar. Neck like a traction engine.