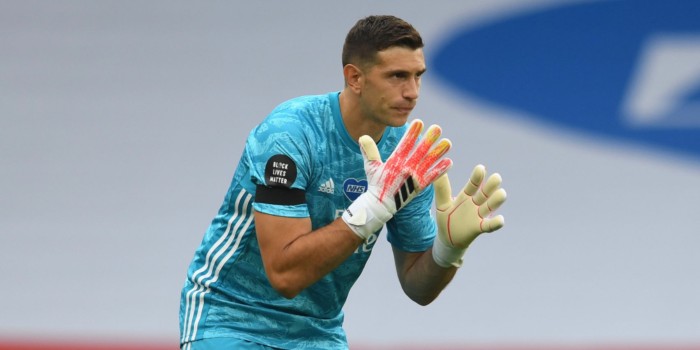 Mikel Arteta says Emi Martinez’s performances since he took over from Bernd Leno are proof the Argentine has what it takes to play regular Premier League football.

When the 27-year-old was thrust into action against Brighton, few people knew what to expect. After a decade at the club, the keeper had only a handful of first team appearances to his name and hadn’t featured in the league since 2017. By and large, he’s been exemplary.

He’s been commanding in the box, decisive with his sweeping up, swift and accurate in his distribution and and he’s enjoyed impressive ‘stickability’* in his handling. So far, Arteta likes what he sees.

“In terms of Emi’s character and his goalkeeping ability, I didn’t have any question marks,” said the boss ahead of Wednesday’s game with Liverpool.

“The way he trains every day, behaves and has been behaving since he’s been at the club is phenomenal.

“He was a question mark over how he was going to do because he didn’t have any Premier League experience and how he can deal with that game after game, and he’s shown that he’s more than ready to do it.

“In key moments he’s been really helpful and he needs to continue to do that.

“It’s a marathon, a long run, and a football club like this demands that every day you’re at that level. That’s why he needs to keep going.”

Arsenal confirmed today that they still expect Bernd Leno to return to full training before the end of the season. Given our final league game of the campaign will be a week on Sunday, that suggests he’ll be back in training in the next week or so.

If we happen to beat Manchester City to make the FA Cup final, Arteta may have a dilemma on his hands when it comes to picking who starts between the sticks.

Martinez: I want more and I will not stop until I get what I want

I think Leno will have to bide his time. Emi has been a revelation and is at a very good age to blossom. Long may the goalkeeping competition continue.

One of the positives of the season

I agree he’s been an absolute gem. Also I tend to see him dive and actually hold on to the ball more than Leno. I think maybe handling might be one of his strengths. Situations where I see most keepers punch the ball unnecessarily and you think why don’t they just catch it or hold on to it. It’s refreshing to see a keeper actually have decent handling skills that’s one thing I noticed about Emi. He’s reflexes have also improved a lot. I hope he keeps getting his chance and keeps doing well

I will happily be the dissenting voice here: he is a fine goalkeeper who makes the saves he ought to make, but Leno is streets ahead of him.

Martinez’ major flaw is he rushes off his line far too quickly. Exhibit A: Maupay at Brighton, Exhibit B: Son at Sp*rs. Both shots from players being pushed wide by a defender. Emi should’ve stayed home and covered his angles.

Those two goals are 4 dropped points.

How about the goals he has prevented by coming out and closing the angle down very quickly? (Vs Wolves)

I think that’s excellent. Again, not saying he’s a bad keeper. He does many things quite well, including some things like high claims that Leno doesn’t do well. But he is decidedly not a better keeper than Leno.

Ok here after the ‘Pool game and I have to say he is more than a fine keeper. He is a very good keeper. If he stays home more than maybe he can challenge Leno for the no. 1 spot! #humblepie

This is new territory for Arsenal in having two competent players in one position. Maybe the best two players in the whole squad!

7 – Bernd Leno has made seven errors directly leading to an opposition goal in the Premier League since the beginning of last season, the most of any player. Howler.

“From the beginning of last season.” How many did he make this season? 2. Behind Ederson, Pickford, De Gea, and Martin Dubravka.

Your bound to make a few howlers behind a defence like that. Ederson and Allison barely get their gloves dirty, so don’t get many opportunities to make mistakes.

I agree, If we do get to the final, it’s definitely going to be a selection dilemma.
Maybe the loser of that battle can try his hand at taking up one of the positions at centre half… can’t be any worse than what we already have available… (I jest of course).
2 amazing goalkeepers… Next season will be great competition for both.
Interesting to see how that pans out.

With emi’s skill with the ball at his feet and the absolute unit that he is, it’s definitely an option

Gotta be Emi. He’s been key getting us there.
And I’d be really hesitant to play Leno, as much as I rate him, after not much match time at all.

I was dismissive of Martinez at the start of the season because I felt he was taking the place of a younger prospect but I’m now satisfied he’s a worthy backup for Leno.

Martinez has performed far above the expectations of most of us, but I wonder if we are going to have a potential dilemma on our hands for next season. Let’s imagine we don’t make it into the Europa League, then whoever our No.2 keeper is next year is going to see minimal game time – especially if the rumours of the League Cup getting dropped for a season turn out to be true. As well as Martinez has done, Leno is still the No.1, so would Emi (at his age, and now with a taste for regular football at this… Read more »

Martinez has shown conclusively he is a better keeper than Leno and I would certainly make him our no 1. He has a greater presence and far better at dealing with crosses. His distribution is quicker and superior. His positional sense and shot saving is as good as Leno. Altogether I feel far more confident with Martinez.

He grew up as a South American forward. That’s like having Luis Suarez in post, good scary

“Shown conclusively he’s a better keeper than Leno?” Over 4 games? Madness.
Leno is fourth among PL GKs for saves, save percentage, punches, and penalties saved this season. This is the player who more than anybody else in the squad – perhaps except for Aubameyang – who has kept us anywhere NEAR the European places this season.
Put some respect on his name.

Which one's a keeper

One will have to be sold to get money in, during the summer, sadly. Then they’re going to sign washed-up Joe Hart on a Bosman to sit on the bench,

He’s been great. Come in and we have not missed Leno entirely. Whilst the German may shade it with reaction stops, Emiliano far better with quick distribution. what we do need though are players higher up the pitch that can find position for him to distribute and transition us quicker from a defensive posture to a counter. BOTH Auba and Pepe tend to wait for the ball to be played to them and neither terribly strong at competing for the ball let alone retaining it. The hunger to hunt the ball back when lost Alexis style also an issue. In… Read more »

He’s a better shot stopper, better in the air and with his feet.

Leno’s got mad reflexes and is much better on 1-on-1s.

That’s a hell of a sweet selection headache.

Its a great GK situation to be in. Saw something in Emi when he started to bulk up like Cech did a few seasons ago. But I feel his standout is not just the confident with the ball, but how he managed to make saves by catching an holding it. Its not a punch and clear it thing esp for ranged shots. Hats off to him for that