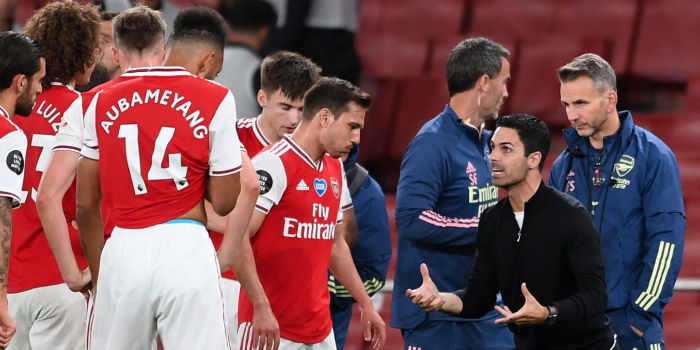 Mikel Arteta says he doesn’t know how long it will take for Arsenal to close the gap on Manchester City and Liverpool and admitted he currently has no idea what financial support he’ll be given to reinforce his squad when the transfer window opens.

Early in the lockdown the Spaniard revealed the club were planning for several eventualities, assumed to be based on whether the club made the Champions League, Europa League or missed out on European football altogether.

With the latter still a real possibility and the transfer window in England set to open before the FA Cup final, there is a lot of uncertainty about how the off-season might play out.

While the Gunners notched a plucky 2-1 win against champions Liverpool last night, the fact 40 points separates the two teams in the tables underlines what a huge job Arteta has on his hands. In the right circumstances, he thinks that could be bridged quite quickly, but he seems to be settling in for a much longer journey.

“Well, I’ve seen it and I’ve experienced it to do it [close the gap] in one year, and I’ve also seen other clubs never do it, or some do it in four or five years,” the Spaniard explained.

“There is a lot of uncertainty in many areas, but what we can control now is who do we want to be as a team, the culture that we are building to do that, the spirit that we need to be successful, and then improve our players and my main focus is on that.

“I want to make our players better and I want to make them more comfortable and create an identity for the football club because then it will be easier to say we need this, this and this.”

Last night’s game at the Emirates once again saw Arteta lean on the club’s Academy graduates. Bukayo Saka started at wing-back, Reiss Nelson netted the winner – his first Premier League goal – and Joe Willock might have added a third in the dying moments. It’s a policy he looks set to continue and one that’s cause for optimism.

“I cannot tell them that I believe in them and then never play them,” he explained.

“We try to make sure that everyone fits as part of the team because that’s how you keep the spirit, and you have to put them in big games as well.

Willock should have buried that chance to rub salt on the injury. But I am complaining though. Let the Renaissance continue. ???

Assuming wolves lose to Chelsea and Sp*rs draw with Leicester.
Wolves , Sp*rs and us have a good probability of finishing with 59 points

This painfully reminds me of that awful VAR decision that robbed us the winner against palace ..

Errrmmmm….I’d prefer if Sp*rs lost to Leicester tho. Why? Because they are sh*t!!!

Yep. And top 4 is beyond us now

Leicester should beat Sp*rs. Sp*rs are shit and we should have beaten them.

If every club fighting for a Europa Leage spot loses (in the last two rounds) against teams above them and defeats teams below them, then Sheff Utd. will be 6th, Wolves and Arsenal 7th-8th and Spurs 9th. Wolves are currently three ahead of us on goal difference (they’ve scored fewer goals though), so making 7th on goal difference is not out of the question.

Looks like we have the man who can do the job, given some financial support. Or, KSE can do a Tottenham and wait, hoping to get lucky. I hope they realise in today’s world, the new fans only support successful teams and we hadn’t had any for a while, our declining commercial income compared to other top clubs is a testament to that.

Forget about it
Reply to  Reality check

I fucking hate this comment because I am afraid you are correct. 🙁

We do need money. No doubt. But we could have a bit coming in…

Arteta may also decide Torreira doesn’t fit his plans which is another £30m.

I know these are probably wholly inaccurate projections. But there’s money there. And some of these players do not need replacing.

40mil for Guendouzi? I laugh in Spanish

Over 50 caps for a premier league team at 21 isn’t bad. Can’t think of many players who have that kind of experience so young. Good chance of getting solid sell on value. French international. If Dortmund are buying Birmingham City youngsters for £22m, then £40m seems fair for Matteo.

I agree, if only they wouldn’t all know, that we desperately want to get rid of the guy. But I don’t think it would be difficult to create interest for him and if we insisted that he is not for sale and he’d seem happy at Arsenal, I could easily see the 40 million offers coming.

Matteo is a massive talent and his contract runs for another three years. This is just the sort of player and situation which we need to learn how to cash in on. Otherwise what’s the point in buying and blooding youngsters if we are going to sell them for peanuts.

Liverpool have been selling totally unproven young players for £20-25m for years. If we can’t get £40m for a lad with his credentials then we have serious problems with our transfer negotiation skills.

We’ve had devastating problems for 10 years in transfer negotiation.

Oh Really??? Wonder how long have you been supporting Arsenal?? It is well documented! let me give you some examples: Ramsey – Free Wilshere – Free Nacho Monreal sold for £225K Clichy sold for £7M On the same window, Henry sold for £16.1M while Charlton striker Darren Bent was sold for £16.5M. Szczęsny sold for £10M (a guy with 46 caps, over 300 top flight and European appearances (for Arsenal, Roma and Juventus), who has seamlessly replaced one of the best goalkeepers of the past 30 years.) Similarly, two weeks after we sold Gabriel for £10m to Valencia, Spurs recouped… Read more »

I laughed in german when i saw ozil for 10 mil. Who’s gonna pay?

No one. But we save £10m on our wage budget if we can find a club and they agree to pay half his wages. That is not such a big ask in my humble opinion.

65 for Matteo, at least. As mentioned already, unproven youngsters snag 25 in the market and haven’t started a game or shat a goal or assist. If the cream of European football powers are interested, that says something.

I shat a goal once. Must’ve ate it while pissed.

Why would you sell Laca? He is our best player? I’d sell auba before I sell Laca. Auba can score for sure but has no other tool. He can’t dribble, he can’t pass.

Because my opinion pre dates the last two games. He’s a shell of his former self. He’s never bagged 25 goals in a season which is a staple for a top striker. And the Auba / Laca experiment just hasn’t worked. We need a change and I for one would prefer the world class striker not the guy who is good occasionally.

Sadly success is paid for in cash now. You might develop one or two gems such as Saka and Martinelli but you do need to spend money.
Would Man City be so successful if they had Kroenke at the helm?
Of course not…

Successful teams like City and Chelsea also have competent people running the club.
Our board and scouting network bas been shit for years. All we had was a competitive manager in Wenger who kept us in CL all those years.

Our youngsters are fine, its some of the senior players in defence and midfield that we need to sort out. Despite yesterday’s effort to keep the lead, we have had a shakey defence our the last few seasons. Of course we need to find our Adams, Campbell at the back. Also, we need to find a Carzola, Gilberto, Petite combination as well for the midfield. We struggle to impose ourselves in most games, we have a illusionary dominance with high possession numbers with the ball circulating through Luiz at the back but struggle to fluently move it forward. Hope Arteta… Read more »

At least the GK situation is looking a lot rosier of late. Nice conundrum for Mikel going forward

Seems to be a lot of quotes from Arteta mentioning the need for financial backing from the owners. Does he already know that the owners can’t/won’t invest? Let’s see what happens – I really hope they allow Arteta to build his own team over the next 3-4 windows.

There could have been promises made to Arteta before he started concerning funds for this summer, which now maybe can’t be kept due to the Covid situation, so that might be his way to remind them that he expects to receive these funds.

He needs to continue the drumbeat. The pressure needs to be put on/kept on KSE and the front office to move out the deadwood and actually bring in players in certain positions that will have an immediate impact.

The most frustrating and depressing thing is that the Walton/Kroenke family are one of the wealthiest families in America. Richer than the Glazers or the Liverpool owners. The capital required to bridge the gap would be a drop in the ocean for them.

And even from a business sense, the lack of investment from them is baffling. The commercial trajectory is falling so quickly for Arsenal, I’m just wondering what the ‘Marketing Strategy’ team is thinking right about now.

Our resources are better than Wolves, Sheffield Utd, and Burnley, but they are still having a great season. Having money helps to improve your squad, but you can’t buy commitment, organization, consistency, and confidence. Against Liverpool our players were up for the game, but the sp*rs game we dropped the ball. You would think we would be up for the spurs game, and be afraid of Liverpool. If we can just improve our mentality and show up for games, we will definitely finish higher next season with the same squad.

This game did not have to go this way, really didn’t but the narrative is Arteta is the guy based on post match interview. Strange. 62% possesion, Unai Emery picking Ozil.. Arteta did Emery (weird lineup, tactics managed on the pitch not outside), he lucked out on result on one of the worst performances and setup i’v seen from this team.

I never noticed before that Auba has two heads.

That hunger from Mikel is fabulous. I love that he is making those accountable above him for the future success of our club.

Likely to be sold or leave – Sokratis, Ceballos, Aubameyang, AMN Potentially leaving – Torreira or Guendouzi, Chambers or Mustafi Sokratis if we get 15m for him we are lucky. Ceballos there is some argument to retain cb he has started to click in our midfield but depends on price. we need a creative midfield player from deep or more advance (in lieu of Ozil) but how much do RM want? We will have competition. There are options for us as well in players like Houseem Aouar who is also versatile and has good attacking instincts. Again it will boil… Read more »

I do not think that this team is as bad as the results this term seem to portray or as some people would want us to believe. What the team needs the most is confidence, proper squad management and a few smart tweaks here and there to challenge for next season.