Arseblog News – the Arsenal news site
Home Staff Manager Arteta: We have to learn to kill the opposition 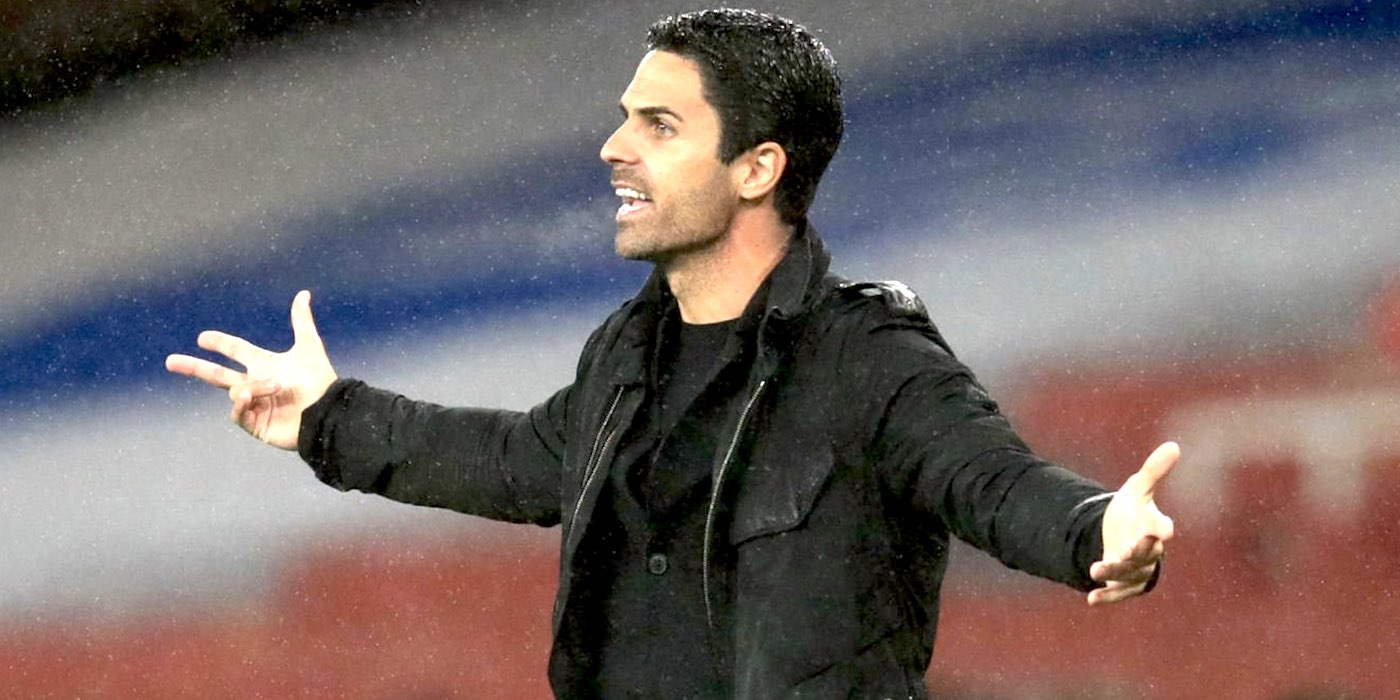 Late in the first half, Hector Bellerin floated a beautiful pass over the Leicester defence, creating a glorious chance for Alexandre Lacazette to put the Gunners 2-0 up.

Instead, the striker headed tamely at the keeper, and it was another opportunity that went begging for Mikel Arteta’s side who, after a slow start, dominated the first 45 minutes.

Arsenal played some lovely football, but lacked the efficiency in front of goal to capitalise – something which came back to haunt us late on after Eddie Nketiah’s red card and Jamie Vardy’s equaliser in the 1-1 draw at the Emirates.

It was a display which Arteta was pleased about, but afterwards made it very clear he expects his players to be more ruthless when we play like this, insisting they have to ‘kill’ the opponents when we have the chance to do so.

“I think for long periods of the game we deserved the three points,” he said, “but against this opposition when you have them there you have to kill them.

“We should have scored three or four goals and then the game is over and we haven’t done that, and after as well you let the team down with 10 men and obviously to win three points by doing these two things becomes really complicated.

“But overall I’m extremely proud and happy with what I’ve seen from the players, the way we played, the way we dominated this type of opponent, and it’s not easy to do after the amount of games we’ve played in the last few days.”

The fact that his team had to play with ten men for the fourth time in his relatively short tenure as manager is another area Arteta wants to see improvement in, but insisted that if Nketiah’s challenge was worthy of a red card, so too was the incident in which Jamie Vardy’s studs caught Shkodran Mustafi in the face.

“The incident with Eddie, we can discuss the intention or whatever it is, but the referee has made a decision and we have to learn from that as well,” said Arteta.

“Since I’ve joined I think it’s the fourth time that we’ve played with 10 men and it’s something that we have to improve because we give the opponent a big advantage.

“What I’m saying is that if we review incidents of that type, it will be the norm. It has to be something equal for everyone because it changes the game completely and if Eddie’s is a red card, then for sure the other one is a red card.”

Was it deliberate from Vardy? Check out the replay here. It’s impossible to prove one way or the other conclusively, but our feeling is that while we can’t be positive it’s 100% on purpose, we’re 100% sure it’s not 100% accidental.

If that makes sense.

Anyway, it’s water under the bridge now, we’ll wait and see if we appeal the Nketiah red, and then start preparing for the derby on Sunday.

Giroud missed as many chances against Monaco as Lacazette yesterday. Yet Giroud gets vilified for it till this day while Lacazette gets a free pass.
One is a 12 mn striker and the other is a 60mn one.

What makes you think Laca is getting a free pass? Most people I’ve seen talking about it are unhappy with Laca’s form and many suggest that it’s time for him to leave the club.

Believe it or not, a lot of people apparently think Laca had a fantastic game yesterday

I think he worked harder and better than he has in some other recent appearances, but at the end of the day he should have done better with the chances he had. I certainly wouldn’t say “fantastic”.

The boys did well. VAR was “indecisive”?… Why give them the goal, then ?.
Arteta next time when you choose to defend deep add on holding and soktratis for the leggy xhaka and kolasinac

I can’t wait for a proper summer/pre-season with Arteta to get his transfers in place, a full pre-season worth of training etc.

It feels like he is the right man to be in charge of us. We have improved so much in such a short amount of time. If Emery was in charge now, we probably wouldn’t have won a match since the restart.

It had happened during Wengers time when Arsenal had so many shots at goal . The game against Hull comes to mind . Hull were outshot and yet won 2-1 .Same with MC against Saints.
Hopefully the gunners will kill off the opposition. Thats why the epl is value for money.

If Eddie was a red card so was Vardy, he looked at where Mustafi was before he *accidentally* kicked him in the head!

Everything about how he fell was unnatural, and he blatantly had a look. My annoyance with the whole thing is the lack of consistency over VAR, its implementation etc. If Laca was offside, so was Vardy. If Eddie was violent then so was Vardy.

I can see why they deemed Eddie’s challenge a red as he was facing the ball, lunged and caught him. Vardy was tumbling on the floor and wasn’t facing the action and he made it look as accidental as possible. If you lunge for the ball and catch someone on the knee, it’s easy to argue you’re recklessly endangering an opponent. If you’re falling on the floor and you catch someone with a flailing leg, less easy to argue. So I can see WHY they came to the conclusion they did even though we all know what Vardy was doing.… Read more »

Yeah I can understand why the decisions were made last night. It’s just frustrating that this type of situation always seems to happen to us :/

I don’t agree with it, it reminds me of the Nani challenge against Real Madrid if you remember, and he got a red.

Another thing about that one, he attempted to apologize so quick after it happened. If it was accidental, how he was falling, he wouldn’t have been sure what part of Mustafi he caught with his foot, and if it wasn’t his head, it wouldn’t really be anything worth apologizing over.

Poor and inconsistent refereeing should not have affected this match. Lacazette really should be finishing guilt edged chances.

Laca may be feeling guilt-edged after missing the gilt-edged chances! 😉

How about this: refereeing should be better and more consistent in every single match in what is supposed to be the “best league” in the world, so that we aren’t left justifying their incompetence and corruption with phrases like “we should have” and “water under the bridge.” Absolutely unacceptable stuff, and yet everyone simply accepts it. Hence …

I agree, but what exactly is it that we can do to not accept it? what course of action should we take. And by “we” do you mean us fans or Arsenal Football Club?

The positive is that our defence has improved, our number 2 goalkeeper looks to be as good in most categories as our number 1. The midfield are connecting to the attackers. Now we just need to improve our chance/goal ratio. That first half wasn’t a fluke. We’ve seen it consistently since the restart. Which is very credible considering they are playing twice a week, sometimes thrice.

Regardless, I am happy with what I saw and I’m sure if the fans were there that the players would have been applauded off. We can’t for more than a good performance, luck wasn’t on our side with the missed chances and ref.

I like the way he says “to kill”, not beat or something…not that i mean we should kill the opposition but just the word seems to be powerfull

‘Was it deliberate from Vardy?’

There’s no mention of intent in the laws.

A red card for serious foul play is given if a challenge uses ‘excessive force’ or ‘brutality’ during a challenge for the ball. If it’s just ‘reckless’ then it’s a yellow.

A red card for violent conduct is given if a player uses ‘excessive force’ or ‘brutality’ off the ball.

I’d say you’d have to apply the latter to Vardy as the ball had gone and this was a movement after the tackle.

I was having a niggling thought that it was deliberate, but after watching this replay, I’m more than convinced that It’s 100% deliberate from Vardy and so was his apology (which was an after thought). If it was a street game, he would have been lynched for that by the opposing players. Extremely nasty and malicious of him. Very unprofessional act probably in the hope of forcing a change and perhaps a tiny advantage of some kind.

Snakes and Ladders. He’s absolutely right.We are back down to 8th and by tomorrow possibly 9th again, We need to take our opportunities. Said it many times, as much as defense has issues, we do not help ourselves if we lack efficiency up top. Particularly when we went down to ten, we did no have a sufficient outlet. BUT even in first half when we were fluent, we did not finish them off. Laca had several great opportunities much made by himself so hard to blame him for being entirely wasteful but clearly he needs to be sharper still. BUT… Read more »

Vardy should of been given a red card to? Anyone feel VAR goes against us more than for us

Let’s not get ahead of ourselves, from the maligned Emeryball ashes we are beginning to look like a side that has a plan and apart from 1 or 2 individuals our players are buying in to, Rome wasn’t built in a day and we will have setbacks but I have discarded my often used half empty glass for a half full one as I’m so optimistic we now have a guy at the wheel who has a plan knows what shape we should play knows how to manage players, early days I know but I didn’t feel this way even… Read more »

Vardy’s a definite red, intentions don’t count here. It wasn’t Nketiah’s intention to break Justin’s leg, but he got a red. What’s good for the goose is good for the gander.