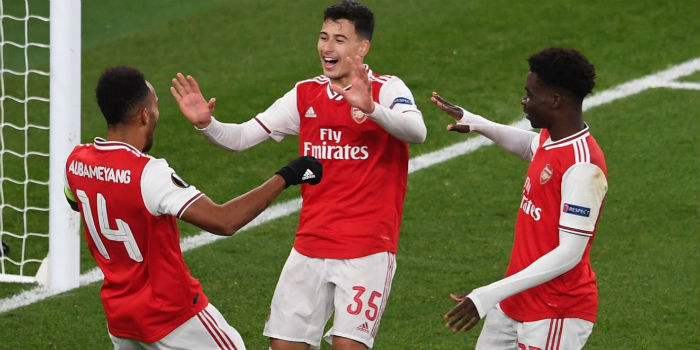 Pierre-Emerick Aubameyang has hailed the impact Gabriel Martinelli and Bukayo Saka have made at Arsenal and played up the importance of tying down the two 18-year-olds to new contracts.

Both players secured significant pay rises this week when they penned extensions committing them to the club until 2024.

Combined, the duo has featured in 61 matches this season and been directly involved 28 goals.

While their eye-catching contributions have grabbed the headlines, other youngsters, including Joe Willock, Eddie Nketiah and Reiss Nelson have also been making decent strides.

Speaking to the official matchday programme ahead of Leicester’s visit to the Emirates, the captain suggested the future is bright for the Gunners.

“It was great for the club that Bukayo and Gabi signed new contracts last week,” he said.

“They have made a big, big impact at the club even though they are only teenagers.

“Particularly for Bukayo, it must be amazing to sign that contract and think back to when he first put on an Arsenal shirt in the Academy when I think he was only six or seven.

“Both of them are such impressive players already, they have so much to their games – as Bukayo showed with that brilliant goal on Saturday when he just guided it in so nicely.”

Aubameyang, who was something of a late bloomer, couldn’t help but look back on his own development coming through the ranks at AC Milan.

“It’s funny for me looking back because at 18 I was really raw, there was a lot more for me to learn and it took me a few years to really see all of my potential.

“But these boys – and you can say the same about Joe and Eddie too – they already seem to have lots of mature attributes.

“And the great thing is that they are making an impression at the highest level now, but the key is that they are hungry to work hard and really want to learn more and get better and better.”

Both of them would be delighted if you sign da ting as well, Auba 😁

Obviously, this begs the question: will Abu sign da ting?!

Hope the club can manage it. A great start for the transfer season if so.

Spoken like a true captain. Now grab a pen and make us happy!

I have a very weird feeling that Auba will stay. I dunno why. He just seems so enthused about Arteta in charge

Lol same. Im not sure how much of that comes from my own desire for him to stay. The noises coming out seem promising though. It would be great particularly for Martinelli and Eddie to have such a prolific scorer heading the attack. It allows the kids to grow into their development without pressure to be consistent in a way that very few teenagers are. That 2-3 year buffer would be useful for both us and the players themselves

Auba will stay if he gets the contract he wanted not because of Arteta.

I think he would have liked to have understandably won something big. Spain have pretty much run out of money though, so his options are limited now.

I also think Covid is playing a factor in Auba’s thinking. This would be a weird time to change clubs/countries. Hopefully he’s settled in London.

I think players from other teams will start looking at how well Arteta’s handling the great ship Arsenal.

Now sign and let’s finish this one and start fresh next season. Hopefully with a couple of solid signingans.

Keep up the good work!!

Does ANYONE else think of Auba as a perpetual “good player on a bad team”? I cannot understand why everyone rates him so, so highly. He’s a great goalscorer. Not a good dribbler, passer, holder of play, or physical threat. Paying him huge money might come back to bite the club the way that Ozil’s contract has.

Take a look at his stats if you don’t trust the assessments of just about everyone in and around the footballing world. There were rumours of a bad attitude at Dortmund which might have slowed down our pursuit of him at first, but he’s been nothing but exceptional since donning the red and white. Auba’s greatest threats emerge from his speed, timing, and intelligence, and he does not appear to be losing any of it. Moreover, he’s been earning his keep on the left wing rather than at centreforward, and the guys puts in a serious defensive shift. He’s our… Read more »

Let me first say that I agree with everything you have said about Aubameyang and I believe that we must try and keep him at all costs.
I must however correct you on some facts. Aubameyang is the fastest player in Premier League history to score 50 goals. He is only the 7th fastest in the history of Arsenal . The fastest is Ted Drake who amazingly achieved it after just 52 games. Even Ian Wright was quicker in 68 matches. This is not remotely trying to disparage Aubameyang as the standards are so much higher now

In my opinion, if he was a serious asset in taking this club back up the table, we’d have seen more success from the team in his 2.5 years of being here. I don’t think everyone in the footballing world disagrees with me. The team played really sound, total football with Giroud up front, consistently qualifying for the Champs League. Sure, Auba has more talent. But scoring exciting goals on breakaways and putting away gifts (like the goals against Norwich) do a lot to gloss over the fact that the team hasn’t played to a consistently successful style in a… Read more »

Doesn’t matter if he can’t do the other things, the bloke scores goals consistently. He should get huge money for that alone, if we don’t pay it someone else will. He got to 50 goals quicker than anyone in the history of this great club. Ozil Doesn’t do anything, Auba does, that my friend is the difference. Give him what he wants so we can get what we want..a successful team.

Adding: I really really hope we keep him.

He scores loads of goals. He’s a very limited player. But he scores goals. And that is enough!

I’d love to think part of auba’s conditions in ‘signing da ting’ is for the club to bring in: (wide)players with pace who can keep up with him, so that he isnt so isolated when breaking away and not as solely relied upon for pace. and/or players whom can give him better chances, considering he was promised prime ozil and his mate mhki feeding him chances when he joined he now has neither. Seeing his interactions with Saka on socials and martinelli’s words on auba when he first joined makes me hope auba can see himself playing great AND enjoying… Read more »

Make sure Arteta holds on to Maitland Niles aswell he’s a true Gunner. Auba & Lacozette stay with the Gunners the Youth need you to lead the way. Bye bye Ozil your best just ain’t good enough. Do the right thing and bale out.

Finish high as possible in 6th (and FA cup) and we may be able to stand a chance keeping Auba.

I doubt the signing of these players alone will do the trick. He will want to consider options with clubs in CL and a final move before he winds down the career.

All these sweet nothings otherwise pleasing to the ears of some fans but reality is Auba is 31yrs+ and likely will move.