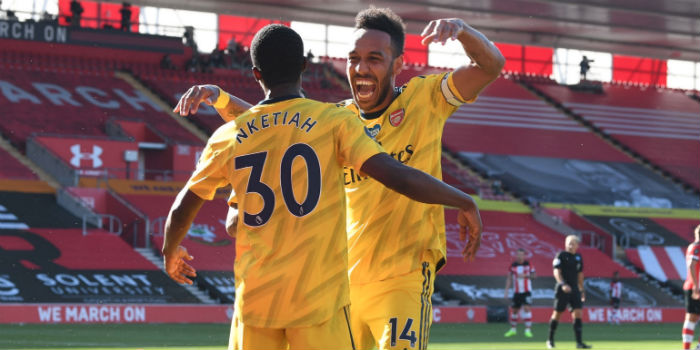 Pierre-Emerick Aubameyang says he enjoys offering guidance to Arsenal’s youngsters in his role as club captain and revealed he had to put an arm around Eddie Nketiah, who he believes has a big future at the club, after the striker’s red card against Leicester.

After praising the impact of Bukayo Saka and Gabriel Martinelli in last week’s column in the official matchday programme, this week, the Gabon international reflected on life as a senior figure in the camp.

“It’s a great experience for us experienced guys to be playing alongside all these good young players that we have now,” he wrote.

“Im really happy to have them with us, because it’s really fun playing alongside players with that energy.

He added: “As captain of the club, I really like the responsibility I have to set an example to them.

“It’s funny because I remember very well being in their position – being a younger player who looks up to the captain. But now I am the one trying to give the advice and what I really like is that when I do talk, they always listen, and they try to take the best out of what I say to them. It’s something that makes me really proud and I want to keep doing it.”

Having already missed Sunday’s derby, Nketiah will miss tonight’s match with Liverpool and Saturday’s FA Cup semi-final against Manchester City. His three-game suspension, earned minutes after coming off the bench against Leicester, couldn’t have come at a worse time and it sounds like he’s been a bit down in the dumps about it.

“Eddie Nketiah was really disappointed to be sent off and to be missing these games,” revealed Aubameyang.

“But what he did can happen in a match. Everybody knows he didn’t want to hurt the player, he was going for the ball, like he always does, and was unlucky.

“It was similar for me earlier in the season when we played at Crystal Palace. I didn’t want to hurt anyone, I apologised, but I had to miss three games too and you use it to learn from.

“Eddie is going to be a big player for this club for a long time hopefully, and he will go through moments like this in his career.

“What I really like about him is how hard he works – the guy never stops running! And he needs to keep that part of his game too, closing down players and putting defenders under pressure, because you can get goals that way as well, just like he did at Southampton recently.”

Sign him up, Arsenal! He’s by far our best player and a genuinely good human being. Deserves to be a club legend.

I heard he actually wrote about the strategic difference of playing three at the back but then asked Eddie to proof read it.

Acting like a captain! Really hope we can persuade him to stay – and the club can flash the necessary cash.

Comments like this make the Sp*rs loss worse when you realise that has all but killed Europe and the cash needed to keep this absolute legend.

9/10 he buries that Bellerin cross, not to mention when he hit the crossbar in the 2nd half. We would’ve sealed the game with either of those chances.

Maybe he should put an arm around Luiz, Mustafi and Kolasinac? Or better yet, how about a foot up theirs?

The club need to move heaven and earth to keep this guy. I shudder to think where we would be now without his goals during the past few seasons. For someone who joined the club with a reputation for being a bit of a lad, he has proven to be an exemplary professional, both in his commitment and his performance. If the board don’t stump up the cash to keep him, then they deserve dogs abuse – and nothing less.

I think Auba will sign. He loves the club and knows fans love him. I think he wants to become an Arsenal legend. He still have about 4 years of top level game time in him. Also I think he understands the Mikel Arteta rebuild project and he wants to be part of it and retire an Arsenal legend. We might win the FA and League cup in Arteta’s 3 years and probably also challange for the league. We are on the right track as far as what Mikel wants us to do. It’s up to the Kroenkes to give… Read more »

I’ve been a gooner since knee height,my sons a gooner and great grandad played woolwich arsenal. Highbury was amazing. So close to the pitch. Emirates too vast. No atmosphere. Normally hear the away fans more. In truth Arsenals lost its heart. Spend stupid money on average players. Luiz is a joke,can’t defend for shit,i not care what expierence he’s got. Cos his best days passed him,amount red cards prove that. Rambo went because ozil wages. Fuck just give him away. Got so many young players coming through. I’d bin off Pepe,ozil,mustafa,holding, and lacazette…….use dosh to keep Auba and get Ramsey… Read more »