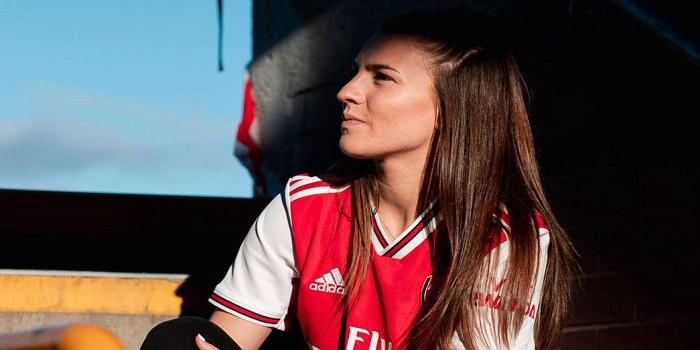 Arsenal Women’s new signing Steph Catley says moving to Arsenal was a “no brainer” given the rising quality of the WSL. The Australian also said that the presence of her former Melbourne City boss Joe Montemurro and international teammate Caitlin Foord enticed her to North London.

Catley told Sky Sports News, “Because I’ve played in America for so long, I’ve been there for around six or seven years, since I was 18. I feel like I have experienced everything I can in the American league and now I want to challenge myself at one of the best clubs in the world.

“England has gone from strength to strength in terms of its league and their national team in the last couple of years. For me it seemed like a bit of a no brainer.” Catley piqued the interest of several European clubs, including Lyon who made her a strong offer. Steph, who flew into London this weekend, insists Arsenal was the best choice for her.

“There were a few [options], it was a time in my career where I made it clear I wanted a change, it wasn’t exactly easy but for a few years now I’ve looked at Arsenal as a club that I have wanted to play at. Everything aligned at this moment in time and I knew that is where I wanted to be. I look at the list that we have at Arsenal and I am flabbergasted by it. There are so many incredible players that will be pushing each other.”

Catley says Arsenal’s expanding Australian contingent at the club was also key to her joining, “Obviously, it came into it. I know how [Montemurro] likes his team to play and as a footballer I fit into that system. He likes to play attacking football and likes his teams to have a lot of possession while also being well-disciplined in defence.

“It’s the way I like to play football and it’s obviously nice to have a fellow Aussie when you are going somewhere brand new. I’ve leant on Caitlin a lot over the past few weeks. It’s so much easier going into a team where you know a few friendly faces.

“I’ve known her years, I’ve played alongside Kim Little and Jennifer Beattie as well at Melbourne City for a year or two. You know you work well with them on the field and knowing them off the field definitely helps as well.”

Arsenal’s summer business is not yet done with further signing announcements expected during July. The signings of Catley and Swiss midfielder Malin Gut were confirmed last week.

Welcome to the Arsenal, Steph.

What position does Steph play?

Left-back, but she can play centre-half and defensive midfield too.