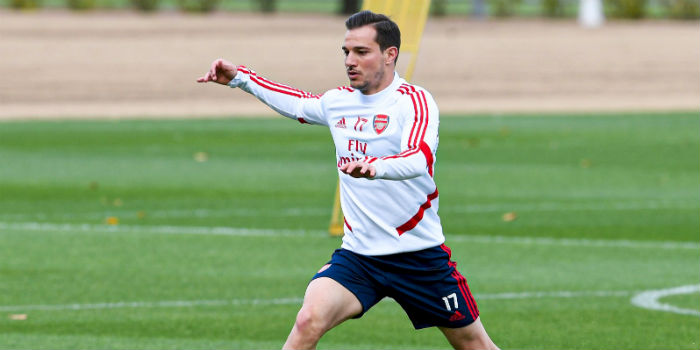 Three weeks ago, it looked like there was a possibility of Cedric Soares leaving Arsenal before he’d even kicked a ball for the club. At least, that’s what it looked like from the outside.

Injured since he joined on loan from Southampton in January, his deal up to 30 June was set to expire and with the financial complications of Covid-19 there were suggestions we might draw a line under the relationship to save a bit of cash.

In the end, Cedric extended until the end of the current season, penned a four-year deal, made his debut against Norwich and scored within a couple of minutes. A fun turnaround for the Portuguese.

It doesn’t sound like the right-back was ever worried about being jettisoned, hinting that Arsenal’s initial interest was about signing him on a free. That he got to join on loan for six months was something of a bonus.

Speaking to Portuguese paper Record (translated by Sport Witness), Cedric revealed: “There was the possibility of coming to Arsenal at the end of the season or me joining in January. Thankfully, it was this way because this period allowed me to be involved with the group.

“Arsenal are in a process of evolution, they showed they trust me and they presented me with a very interesting project. The confidence of the club was shown through the contract, which made me very happy.”

Mikel Arteta has already said that of all his options on the right side of the defence, Cedric arguably offers the most in the attacking third. It sets the bar high for the Euro 2016 winner but he doesn’t mind that. In fact, he seems to be enjoying the challenge of the step up from Southampton.

“I’ve been in England for a few years, I know the league well, but of course there’s always an adaptation,” he said.

“Arsenal are a huge club with a great history and that’s why I was so excited to sign for the club. They have a very strong footballing philosophy and so far the adaptation has been excellent. I know the city, the league, and my teammates have helped me a lot, as well as the technical team and all the staff.”

He added: “Since I was a kid I looked at England and Arsenal belonged to the top three year after year. I had the dream of playing for a team like Arsenal and I’m very happy to have reached this level.”

A good move in my opinion. May he continue to flourish!

Wasn’t impressed with his performance on his full debut. Didn’t attack or defend well but will not judge him just yet. Playing fullback requires a lot of confidence and mobility and the ability to sense danger. Im with Belerin but he needs to fall back in love with football otherwise he will be a goner!!!

Let’s cheer them both on. He’s only played a couple of games and Arteta likes his offensive qualities.

It’s also good to have some competition in our squad. Don’t want our players thinking it’s easy to get into the squad.

I disagree I think he had a very solid full debut against wolves. And I don’t think it’s certain that he will be second choice. Hector has competition which is great for the team and us fans.

He’s more confident and mobile than Bellerin. It’s a shame to say that about Hector but he looks like he’s running through sand sometimes now…

It’s always good having players that want to play for our club, not just sees it as a paycheck.

Good luck to him but he’s nowhere near the requisite quality. A two bob signing that won’t push Hector and won’t improve the squad

Completely disagree mate, if Hector doesn’t step up he will find himself on the bench, honestly don’t feel that Arteta see much between them.

Seems a bit basic as a player, like a fictional PES master league squad member Will probably do fine as back up, but ideally a club’s squad/fringe players should offer a little more than just cup appearances and a handful of league starts. Like having the potential to improve and one day make the starting spot theirs, leadership off the pitch, versatility, strong connection to club etc There must be many right backs in the world who could have offered similar suitability, ability and financial value. But we happened to go for the one with the superagent who has a… Read more »

Maybe a little harsh, hope he proves me wrong

But I feel like with Bellerin struggling the last season or 2, and AMN not overly keen to become our long-term RB, we could really have done with starting XI player. Cedric’s signing kind of blocks that from happening and feels like more squad bloat

What is all the negativity around him,is it because he played for Southampton, the guy won the euros with Portugal and let’s be honest about Portugal are better than England. We have terrible fans, he is a great back up right back. Guys jenks was are number 2 less than 2 years ago.

Whats wrong with Cedric? He hasnt even played yet.

Hasn’t shown he’s a world-beater for us yet, but he’s only had 1.5 games and I’m hopeful he’ll turn out to be an astute signing. I thought he was good against Wolves, and probably saved a certain goal with that sly push on Jimenez… not mention, it was his in-field pass to Auba which led to Saka’s sexy finish!

I wanted us to get him when Southampton did, remember telling my brother that they’d got a player there.

kind of glad he didn’t set the world alight and hope that means he retains his quality.

“That he got to join on loan for six months was something of a bonus.”

I was front row (wing) at the home leg vs Southampton this season (not that good of a seat tbf). I’m not saying he’s world class but he was hammering us on that wing. I’d never heard about him but he just kept powering past our players over and over again. It was embarrassing for us. I remember we had quite a non-existent midfield during that game so maybe that’s what made him look so good. But anyway I watched him basically 2m away for 45 mins and think that he is of Arsenal quality. he knows his position. He… Read more »

The last two sentences you wrote are perfect. He’s a real pro at RB, he’s confident and very solid, and more dangerous going forward than Hector.

I think Cedric is going to surprise a lot of people. I like what I’m seeing