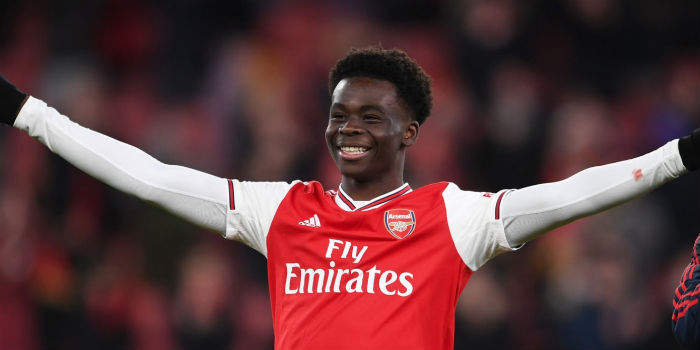 Mikel Arteta says he’s not worried about the hype surrounding Bukayo Saka and told the youngster to enjoy his moment in the limelight.

The 18-year-old has been one of Arsenal’s most consistent performers this season, shining in a side that has struggled to get out of second gear at times.

When he extended his contract at the Emirates – turning down a host of high profile suitors in the process – the announcement was given the type of fanfare usually reserved for a big-money superstar.

Since then there’s even been talk of an England call-up. Is Arteta worried about the attention being lavished on the teenager? From what he’s seen there’s nothing to worry about.

“First of all, enjoy the moment,” was the boss’ advice. “Football has some really good moments and some difficult moments.

“First, enjoy the moment when you’re doing so well. Enjoy it! But then understand that this can change in 24 to 48 hours and you have to live on your toes all the time, ready to react and act.

“Bukayo is like this. Every training session, he doesn’t give you any sign that he’s being different.

“Your performance is a collective thing and you need everything around you to work. There are going to be moments when things are a little bit up and down.

“It’s normal, it happens to every single player whether you are 18 or 38. He just needs to understand that, take it naturally and we are to support him, to try to make him better and that’s it, enjoy.”

You sense Arteta’s words aren’t just directed at Saka. When he joined the club in December he was keen to lift the morale of a damaged dressing room and to make it clear to his players that they were living a privileged existence at a top club and that they should appreciate what they have.

While we continue to have ups and downs on the pitch, the squad looks to be a happier collective, even if a couple of individuals have found themselves on the other side of the velvet rope.

Saka is so humble, when Kierney turned up with a Tesco bag for life, Saka was heard whispering to himself “one day Bukayo, one day…”

We just need to handle him with care. Club should learn from their handling of Jack Wilshire and not put too much strain on a developing body. Remain injury free till 22 and we will have one of the best player in the world in our hand.

What does the club have to do with Wilshere’s body being brittle?

It was brittle cause he was playing too many games at an young age and got him self injured. He was so adamant to play in the under 23 world cup or some other national team game that he went against AW’s wishes and got himself injured. And i believe that was the start of a long list of injuries that he never really recovered from. Im not sure what body being brittle means? It’s not like he lacked nutrition or anything at that age? Or starving himself like a ill advised teenage girl to lose wait and look pretty…nothing… Read more »

Dave cee
Reply to  VAR will solve the problem

Such a shame how things turned out for Jack, he looked like our own version of Gerrard

Though what you say is true to an extent it’s Wilshere, I think it was more to do with the way he played his football that made his susceptible to injuries. He was very very good at releasing the ball at the final second, taking a man out of the game in the process and more often than not, the men took him out and he got injured. Most of his injuries stemmed due to contact and the problem with him altering his technique to avoid these contact injuries made his less effective on the pitch overall. It was unfortunate… Read more »

goongot
Reply to  VAR will solve the problem

messi,mbappe,ronaldo,silva,xavi cesc ? They all played many games as teenagers.Nothing to do with that !, Jack got unlucky with injuries and his playing style.

Naked Cygan
Reply to  VAR will solve the problem

Jack was a great talent, but unlucky with injuries. He also didnt do himself any favors with his antics of the pitch.
But he will always be a legend for openly calling sp*rs shit.

The young players may make tactical mistakes but they make up for it by sticking to game plan and putting in a shift.

This right side berth still needs getting use to for Saka but he looks like he was finding both his left feet last game until we went a man down.

Like to see him (when he gets more comfortable on the right) go at players and take them on more.

Combination play with Bellerin (or Cedric) will also be HIGHLY encouraged.

He seems extremely focused and mature for an 18 year old. It’s really up to the club from here to manage his development properly

This kid for me is like a raw jewel that is being polished by Arteta at the moment but boy, when the job is done?, we might have a world class player on our hands. we can all begin to glimpse the flashes of brillance that heralds the presence of a great footballing brain..that wonderful but difficult strike he made look so easy in the game before the last, the intelligence of the late run itself to ghost to that position, that glorious ball in the last match that he curled so pin point accurately to Auba’s feet for a… Read more »

Sering that broad smile on Bukayo’s face in that picture, brings joy to my soul. Something tells me this will be the Emirates favourite son and poster boy for Arsenal for many years to come