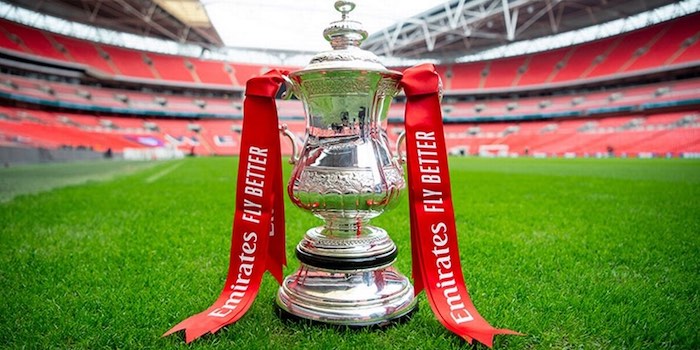 Arsenal take on Chelsea in the FA Cup final on August 1st, and the details of the fixture have been announced.

Referee: Anthony Taylor – he was also in charge of the 2017 final in which we beat Chelsea 2-1.

Kits: Arsenal are rumoured to be wearing the 2020-21 home kit for this game. They will wear some blue monstrosity.

TV: It will be broadcast in the UK on the BBC and BT Sport, and around the world via your local provider.

This is the 139th final, and a chance for Arsenal to end a difficult season on a high note. Not only would it be a trophy, it’s our only chance of playing European football next season – something which will have serious implications on our transfer business if we don’t qualify.

The Gunners have won the cup 13 times, more than any other club, and need to make it 14. Perhaps with goals from the number 14, whose double against Man City sent us through to the final last week. That would be nice.

Lots more to come on this game, and all the build-up in the days ahead.

Come on you reds! Let’s get revenge for the Europa League final.

I agree! I find it weird that when managers are asked whether they want to get revenge for a previous result, they always say no.
I still feel the pain of Baku, and winning this would go some way to easing that. Come on Mikel!

Mourinho never says No to revenge.

This must be revenge! I also think next season we should change our captain. I think Auba is a good guy and good player but waaaay too much of a clown to be a real leader. he plays too much jokes around too much and he’s not vocal enough on the pitch. Also that lapse of concentration against Aston Villa that would never happen to players like Debruyne, Van Dijk, Henderson, Fernandhino, or even Viera or Keane or Gilberto or Henry. it just shows Auba is not a proper leader and I think David Luiz or Leno should be Captain… Read more »

“that lapse of concentration would never happen to […] van Dijk”. Checks highlights of Arsenal’s recent victory over Liverpool …ummm…

Would you reinstate cut-throat Guendouzi and make him captain? If I read you well, you may go that far.

Guendouzi reminds me of Captain Pugwash. Loves to give the impression of being a real rogue while actually being a bit of a twat whom nobody fears and everyone laughs at behind his back,

I don’t think Auba should be stripped of captaincy but I do agree the way he got fooled by Tyron kings was pathetic very school boy like and should not be happening to a senior player with so much experience at 31yr. But I still think if he stays he should still be captain. I’d rather have him as captain than Xhaka or Luiz

I sincerely hope that Martinez will be our no 1 keeper next season.

Let’s set the benchmark higher than that narcissistic twat though

I think it’ll be nice for Auba to win a trophy with Arsenal before he leaves. I really hope we win and then se sell him. I think its unwise to give Auba 31yrs old a 250k wage while we still have Ozil on the books. He could end up being another Ozil if he goes out of form or if he gets injured or for whatever reason he loses the incentive to work hard and fight because he would already be on 250k I think it would be a bad idea to give him that type of money. I… Read more »

You trying to build a basketball team?

And it’s only the start of the school holidays. Ye gods, 2 months more of this…,,

At least we don’t have to suffer Mike Dean as a ref.

I’ll be astonished if Chelsea aren’t awarded a penalty (& we don’t see red!!)

Potential Bonus: We could be kicking Sp*ds and Moaninho out of an EL spot. I would very much enjoy that.

I’ve said this before, when people criticise Taylor’s officiating. He had the nerve to send Victor Moses off on a second yellow, for diving, in an FA Cup final. I’m not sure many referees would have done that.

Mentalista
Reply to  A Different George

There’s always a looming pressure to “compensate” for those things but I hope I’m plainly wrong here.

PodB
Reply to  A Different George

And in same game he ”correctly” allowed Alexis Sanchez goal despite Rambo being in keeper’s eye line. We won, 2-1.

Isn’t there usually a policy that a referee will only referee on FA Cup final in their career? Is this a tacit admission from the FA and Mike Riley that their referees are, in fact, shit?

Yep, that’s usually how it used to be, a referee would only get the middle once in a career but to get same guy only a few years after he refereed the same finalists is really odd, but that’s Riley for you, he’s probably told Taylor to make sure the ‘right’ team win this time…

Yes, there is. There’s a decent article on BBC.com today as to why he is officiating for a second time. I don’t necessarily like the reasoning behind it – that it’s all about family and friends as well – but at least it explains the reasoning.

Winning the FA Cup would be amazing, but it would feel like putting pressure on a bullet wound. It will feel great, having another trophy, and a first for Arteta. The bullet wound is our decline from winning the league to a top 4 team, then a top 6 team, and now a mid-table team should be alarming. We have to act fast, but buy smart. We could end up just like Everton, spending a lot and underachieving. Areta should be backed 100% and get the players he wants for his system, not the players Edu,Kia, or Raul recommend.

I know what you mean about how we’ve declined in terms of being a top four team and even further from challenging for the league itself but you have 4 trophies to go for each season if your in europe, so winning one of that four isn’t bad considering where we’ve been this last 12 months….

So with the Transfer window open from 27th.. does that mean theoretically we could play Saliba in the final? or Chelsea could play Ziyech etc

I am not saying if it possible we should play him, I am just genuinely wondering?

I dont think you can register new players until a transfer window reopens. I think We did register Saliba in our squad even if we loaned him out (to have him being considered a 3 year trained in england before 21st birthday I beleive). As for Ziyech, I’m not sure Chelsea did.

Yeah I am not to sure how it all works..I thought you just had to register them before window closes.. It just kinda struck me that with him missing his cup final due to circumstances between the clubs, it might of been a nice touch to have him in the match day squad for the Final

No. He definitely cannot play until next season.

The relief that the ref isn’t Mike cunt-chops Dean is quite tangible. Shame we’re not playing in this seasons home strip, which is far better looking (IMO) than next seasons. That’s marketing for you, I guess. It’s also a bit Spursy. They, as I recollect, wore a new home strip in their final against Coventry City in 1987 – a sumptuous afternoon where they lost to a brilliantly taken diving header from Keith Houchen and an hilarious own goal from Gary Mabbutt that, 33 years later, I still haven’t stopped laughing at. Just to add salt to the wound, they… Read more »

I can’t stop laughing at this. And thanks for some of the history. And Mike ‘cunt-chops’ Dean ranks up there with my mate’s infamous Mike ‘twat-sack’ Dean comment

No doubt Taylor will already have received his instructions : “Right, so let the preferred team make as many break-up fouls as possible on the edge of the opponents box and in their own half to prevent break aways. At the same time, immediately book the opponents players for any transgression wherever and whenever it occurs, no matter how minor the offence. Allow the players of the preferred team to fall over at will and give them free kicks at every possible opportunity, especially anywhere near the penalty box, especially when they do that Vardy thing of moving the ball… Read more »

I know it’s wrong, but I still have a soft spot for a big, handsome striker who might play that day, and who looks so much better in red than in blue.

If my ever lasting love for Giroud is wrong, well then I don’t want to be right.

I know there’s no point in it. But I wish we had Ramsey for this one.