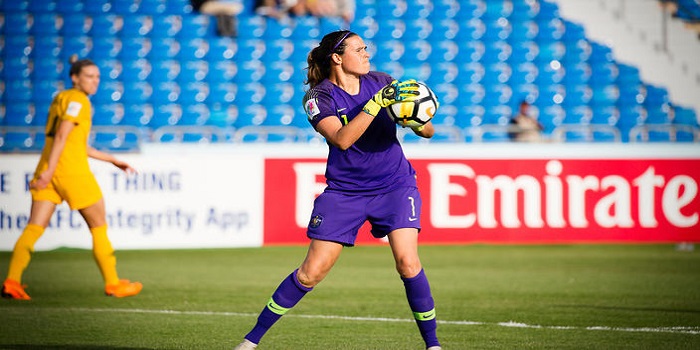 Williams has 88 caps for Australia and will challenge Manu Zinsberger for the number 1 spot. She arrives after Pauline Peyraud-Magnin left the club this summer at the expiry of her contract. She joins fellow Matildas Caitlin Foord and Steph Catley at the club as well as compatriot Joe Montemurro. Like Catley, Williams has worked under Joe Montemurro before at Melbourne City.

“To be given an opportunity to come over and play with some of the best players in the world is really exciting,” Williams told Arsenal.com. “I remember watching Arsenal as a young kid, so It’s amazing to be a part of this team. I can’t wait to meet all of my teammates.”

“This is another really important signing for us,” said head coach Joe Montemurro. “With the wealth of experience that Lydia brings, she can help the younger players that we’ve got, but more importantly she’s a big game player that will be solid and really contribute to the group.”

A little surprised by this signing. Perhaps Joe’s philosophy is to bring in another seasoned international to keep Manu on her toes to be No 1 rather than taking it for granted with Fran as No 2? Does this mean that Fran will be back out on loan for the coming season or do we need 3 goalkeepers?

This signing very much follows a pattern of a big keeper coming in every summer and the rotation policy continuing. I imagine Fran will go out on loan again, she’s still only 19.

This is marvellous. Competition everywhere on the pitch. I know we have all the money and all the history and the Arsenal brand going for us, but I am still impressed by not just the quality but the suitability of our recruits. The only sad thing is that it may mean we lose a youngster in Fran Stenson. Unless you know different, Tim? It also tickles me that we seem to do “themed” recruitment – a couple of Germans, then go Dutch with a dash of Scandinavia, then Austria & Switzerland and this window, we’ve gone full Vegemite. Welcome, Lydia… Read more »

The squad will also have more of a Swiss theme soon too! Lydia is on a 1+1 contract and Fran is only 19 still, I don’t think this will block her too much.

Good to know, thanks.

Ok, I have to ask, Tim…
1) What area of the pitch is the Swiss player for?
2) Have we announced the player that you were unsure whether she was going to be joining us?

The Swiss player is very versatile, but mainly in defence. Lydia was one of the ones I knew about, still don’t have the name of the other player yet.

It’s the summer of Ausenal, eh?

I hope that our goalkeeper merry go around doesn’t mean that Manu is leaving next summer, because I rate her highly and she is still so young for a goalie. But I really like that signing. Lydia seems to be wonderful character with facinating story and probably one of the most experienced goalies around. She and Steph seem to be really close friends, so it should make move easier, although as I understand half of Matildas will be in London at the end of this transfer window. I hope that this year we can share gametime between her and Manu… Read more »

Yes Kennedy is going to Spurs and the other goalie (whose name I forget) West Ham, it’s a proper invasion! I tend to think the plan is for Fran to challenge Manu long term, Lydia’s 1+1 contract suggests this is a short term thing while Fran does another loan spell or two somewhere.