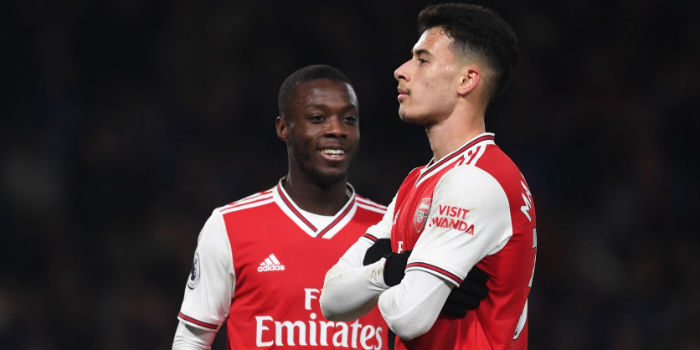 Gabriel Martinelli has revealed his celebration at Chelsea was pre-planned and not, as some have speculated, an imitation of an Arsenal fan’s celebration.

The Brazilian had already been on the scoresheet a few times before our January trip to Stamford Bridge but it really felt like he announced himself as a potential superstar with his cool finish after an incredible, 90-yard breakaway run that saw him gallivant straight through the home side’s midfield and defence.

After putting the ball past keeper Kepa Arizzabalaga, Gabi calmly stood in front of the celebrating Gooner faithful with his arms crossed as if to ask, “how do you like them apples?”

Cameras picked up a supporter in terraces doing the same and it was assumed, the striker had been inspired in the moment. Not so. He’d already asked his mum how to celebrate the night before.

In an interview on Arsenal.com conducted by keeper Emi Martinez, the 18-year-old revealed: “An interesting thing about it is that many people saw my celebration and said that I’d copied the fan who was doing it,” he said.

“I don’t know if you could see it, but he did this before me [crossing arms].

“The previous night at dinner time with my mother, I said, ‘Mum, I’m going to score a goal. If I do, how should I celebrate? Like this or like that?’ She said, ‘Do this. Let me get the food ready. Celebrate like this and let me get dinner ready.’ That’s what she said and when I scored, I did the celebration she said. It was really cool.”

Martinelli also revealed that the magnitude of the moment was immediately apparent to him. But on the way home, scoring such an important goal suddenly hit home.

“As incredible as it might seem, I was calm after scoring the goal but when I got on the team coach to the training ground before heading home, my heart was beating so fast,” he revealed.

“I couldn’t believe that had happened to me. Scoring at Chelsea, in a real battle with 10 men, was something I couldn’t believe. It was a very important goal for the team that evening, and for me and my career, which I’ll never forget. It will always be with me.”

If he never does anything else in an Arsenal shirt, at least he’ll always be remembered for that goal and celebration. My standout moment of the season. I love this kid

Hes just signed a new deal. I’m sure he’s going to do more than this for us. Don’t want to jinx him but he seems like the real deal. But what a magical moment

Even though we tied, for me, this Chelsea game was the most exciting game to watch this year. Martinelli’s and Bellerin’s goals were insane and happened at key points in the game.

See, if I asked my mum what celebration to do, I’d end up having to do my grade 4 violin piece that I played so nicely when the Johnson’s came to stay.

Talking of celebrations, what does the thumb in the mouth thing so many do now mean?

It means a baby is on the way or is already here?

Doesnt it mean that the goal was like ‘taking candy from a baby’s?

I put him in my Fantasy team just before his injury. It’s my fault.

Hope you have Kane and Son on your team against Sunday?

I really hope he can deliver on that potential that he has. If he does we have a very special talent there

Can he ask his mum before he plays every match?

And that was the epoch making moment.