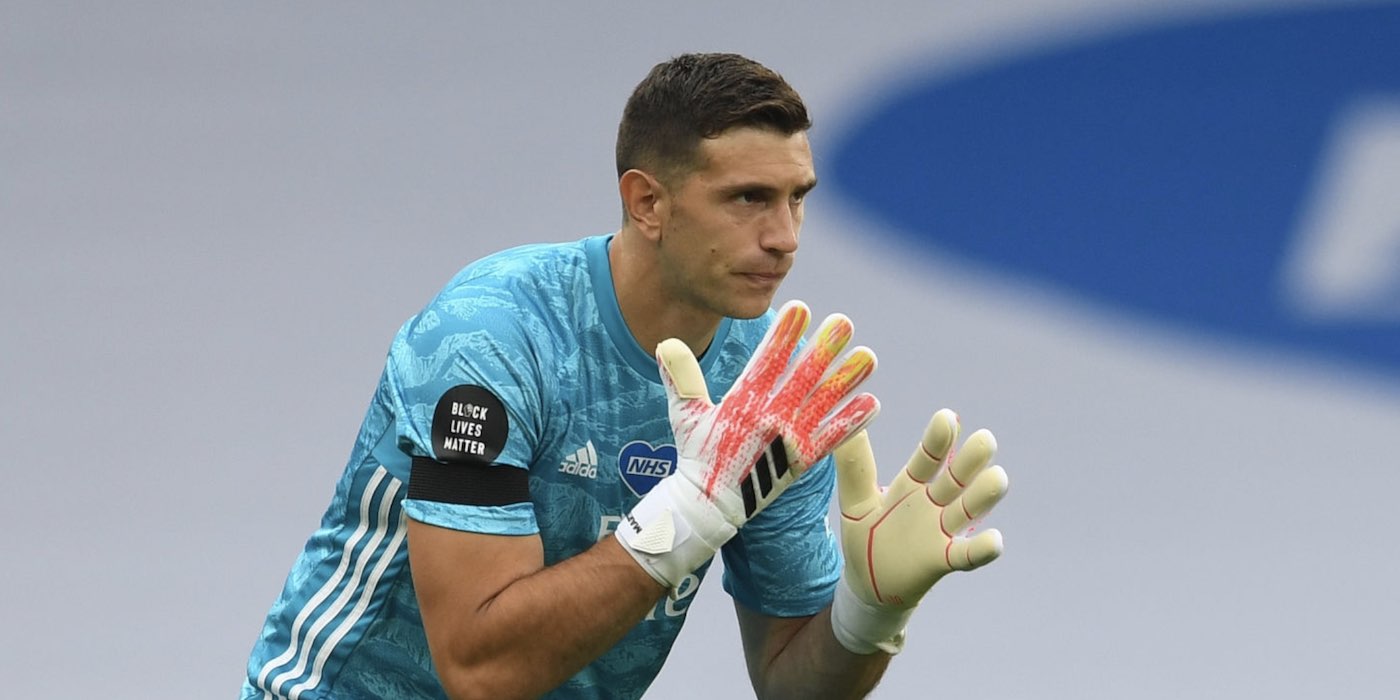 Emi Martinez is catching the eye in the Arsenal goal at the moment, taking the chance presented to him by Bernd Leno’s injury.

With Mikel Arteta now in charge of the Gunners, the Argentine has kept clean sheets in three of the last four games, making some very important saves along the way.

Ahead of Tuesday’s clash with Leicester at the Emirates, the 27 year old was full of praise for his former teammate who took over the job late last year.

He insisted they had high expectations for the Spaniard, but have still been taken aback by the quality of the work he’s doing.

“We knew Mikel would be a good manager when he signed here, but we didn’t know he would be this good,” he told Sky Sports.

“He is incredible. He knows how to deal with experienced players, with young players. He gives us a gameplan against anybody and gives us hope when we do the training sessions.

“He knows what position you have to be in in every department, whether you are a goalkeeper, a striker or a left-winger.

“And then, when we go into the games, those scenarios we worked on in training actually happen, so we start believing in every word that he says.

“When he says something now, we are so willing to listen to him because we know he will take us to another level.

Having joined the Gunners in 2010, Martinez is one of the club’s longest serving players, but has been the third wheel for most of his time here – as well as having some loan spells of varying success.

He says he never stopped believing in himself and the opportunity to stake a claim for the main job at Arsenal.

“That’s one of the reasons I stayed here for so long. They always believed I could become the number 1. That motivation kept me going and it’s not like I haven’t been progressing over the years.

“I was always progressing and pushing my career forward.”

Let’s hope he can keep up this good form when we host the Foxes, and the Premier League’s leading scorer Jamie Vardy, tomorrow night.

Actually we still don’t believe how good he is. I rate him near Allison levels of good (significantly less sample size/achievements, should probably stop drinking this liquor as I already stopped smoking the shii I was smoking)

So – genuine question – does Leno just walk back into the side when he’s fit again? Or do we now have a proper selection issue?

yes he was once upon a time, damien

Reading that has really made me smile. IF (and it’s a big IF) we can beat Leicester tomorrow I think we can still make a push for top 4

I know, big long shot but Chelsea have got 2 tough games next (Palace and Sheffield Utd away, not that being away means that much anymore) and Utd will drop pts so it’s imperative we keep the pressure on

Utd dont look like dropping much points. Chelsea will drop some for sure

Ah there’s that famous Arsenal fan delusion. See you on here tomorrow night throwing every player under the bus ?

United wont drop many points. They have easy fixtures amongst european place seekers and they are actually playing some top level football. Chelsea and leicester are going to get it tough now.But on paper we have most dofficult fixtures of them all.

I wasn’t sure we could we win @ Wolves, and I think we will draw tomorrow. But I hope I am wrong and we finish as high as possible. It would be a great achievement.

Honestly think Leicester are the most likely to collapse. They have a very hard schedule – assuming we win.

He seems to cut a colossal presence between the posts

? Been just as good as Leno… which I wasn’t expecting…. very impressed!

I’d say he’s better in SOME areas. I like that he catches the ball quite a lot which gives up less rebounds/corners. He’s a big lad and hopefully he won’t want a transfer to get regular playing time.

Would he be happy as a cup keeper and Europa if we make it?

That’s the million dollar question, David… he’s 27, not getting any younger…getting to the stage where it’s now or never….

Frankly I think he has been better. He has greater command of his area and is better at dealing with crosses. He also is quicker at clearing the ball and his distribution is far better. To me he looks safer.

Be interesting when Leno’s fit again…..I agree about his distribution, it’s superb.

He looks really decent. It’d be a great story if he made the no1 his own for the next 10 years, as Arteta becomes our greatest manager.

One of* our greatest managers.. what Wenger did to us goes beyond points in the league table 🙂

Yes, he made a winning culture better, won some league titles and then replaced the winning culture with a less confrontational one, where players would laugh and joke on the bus back from a game we lost, as Cesc pointed out, and which was the main reason Cesc left us.

I live Emi, Have thought he has always looked solid every time he’s been in-between the sticks for us. I like the fact he actually catches the ball a lot of the time and he is quite an imposing presence in the area too. Not saying he’s done enough to be number 1 yet but he is certainly staking a case. It’s testament to his determination to play for us that he has stayed this long to prove himself right. A player who has wanted to play for the club that much will have a great impact on those around… Read more »

Emi has been very patient and a lot of fans seem to gloss over him,”he’s reserve keeper so he’s nothing special” kind of attitude. I think he’s better than Leno and I think the defence plays better with him.We lost to Olympiacos when Mikel took him out and I think that affected the players. His distribution is excellent and he stays alert, with this opportunity to play, which he’s never had before, I think he will impress.

?
Even these words about Arteta in this article are underrated, he’s rallying the troops here not merely complimenting the manager. Reread the news

He’s an excellent goalkeeper. Keep up the good work, Emi.

CL football is beyond us.
And if we did manage to qualify, this team is light years from being good enough to progress.
Its rebuilding – although we have heard that for donkeys years.
Lets just be realistic for once.
Blood the young players, bring some new players in (assuming there is money to spend) and see what next season brings.
That is the problem with Arsenal fans – they expect it all right away…

Yeah, if by some miracle we did make the CL you would be probably right as we really aren’t good enough to progress although the money would be very very useful.

So are you saying you would rather we didn’t qualify for c/l, however unlikely that may be. Plenty of therms that qualify have little chance of progressing but there is much more to it than that, not least the ability to recruit and retain the best players.

I think it’s ok to not progress in CL, but at least it gives the players the beliefs and motivation that they salvaged the season into the top 4. Progression is all we can hope for this year.

We can’t afford to replace Auba now especially when we badly need to spend the money in other areas.

How we perform in the CL(if we qualify) is irrelevant in the long term rebuilding process.

Always liked this guy just for being apart of that 7-5 match way back. Also the ”thats Arteta”.. Is a big indictment of the trust the players already have.

Martinez for me has never ever put a foot wrong when called upon and he deserves his chance to prove himself in the team !!

Lets take every game one at a time !! and see where we end up !!

What really impresses me about him is his footwork on the ball. Accurate and with top level composure. It’s exactly what top level modern keepers require. Leno may have a job on his hand to displace him if his performances continue.

It’s a madness he has, like the Wojciechs and Allisons

That save from Shane Long gets better each time I see it. Really impressed by how well he has done in these games. . Two good goalkeepers at Arsenal, I must be dreaming

That’s arteta!
He has earned the respect of the fans and most especially the players

Emi has been brilliant no doubt, but the only problem I have with him (same as I had with Cech) is that in a 1v1, they have a propensity to pick a side a dive. Cech did it a lot, and Emi did it vs Brighton for the second goal. This is something I noticed Leno (and Scezzy before him) never do. Staying big and not diving makes it harder for the attacker to just lob the ball over you.

We didn’t know you would be this good!

All i can say is that we need some creativity on the pich, along with some speed and some solid defence. Like a whole new defence. Than we can think about Europe and being a threat to top 4. There are still some serious money to be invested and for tge prices that they are asking for tickets we deserve that. I reckon that if we get 2 solid central backs, a midfielder than can bring some creativity from the back and a midfielder that can distribute in the front we will be great again.

High praise indeed. Martinez has been a revelation this season. Other than one or two ropey games at the start of his career he’d always looked pretty decent, but we’re really seeing what he’s got now he has the opportunity. I hope he can stay with us although I’d totally understand if someone else comes calling for him as their number one and he takes the chance. Given he spent a long time working under Wenger, for him to be saying these things about Arteta is really encouraging. Whilst this season has been a disappointment I do feel we have… Read more »

well. thats the most positive thing i have heard anyone say about a manager of arsenal in many many years. im excited.