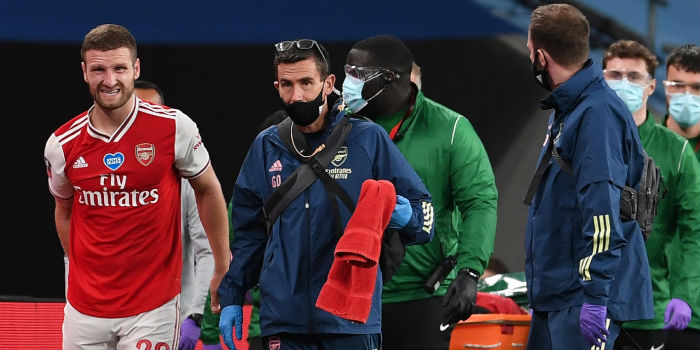 Arsenal have confirmed that Shkodran Mustafi will not be fit to play in either of Arsenal’s two remaining fixtures meaning he’ll sit out the FA Cup final with Chelsea.

The German injured his hamstring at the tail-end of the 2-1 win against Manchester City in the FA Cup semi-final and will also miss Sunday’s game with Watford.

The news is particularly heartbreaking for the defender given he also missed the 2017 FA Cup final after picking up a concussion the week before.

Having been told he could leave the club this time last year, Mustafi has been one of the first names on the team sheet since Mikel Arteta took over. It’s been quite a turnaround for the World Cup winner and there’s even talk of him being handed a new deal. We wish him a speedy recovery.

Arteta now has a week to decide who will replace Mustafi. Rob Holding seems the most likely candidate and Sokratis is also waiting in the wings.

It sounds as though Bernd Leno is winning his battle to be part of the squad at Wembley. Our keeper is running and undertaking ball work and hopes to be in full training in the coming days.

please hope your right, doubt it though a very overated player, id put sokratis over him

I hear the BFG is breaking in some new boots too

I really hope Martinez is kept on goal, he has been nothing short of spectacular and it wouldn’t be fair to send him back to the bench.

I am not convinced Leno is the best keeper tbh

Come on, Leno has made about 1 or 2 mistakes all year long and has pulled off some absolutely stunning moments. Just because Martinez looks good, it doesn’t mean Leno is bad. They both have their own strengths and weaknesses and it’s a great position for Arsenal to be in. As an aside, I decided at the beginning of the season to buy a home kit with no player’s name on the back because it’s beautiful. I planned to buy an away kit at the end of the season with my personal player of the season on the back. Ended… Read more »

Sorry Scott, but i never said, or implied, that Leno was bad.

I said I wasn’t convinced Leno was the best keeper, but that’s just my opinion, nothing empirical about it

I don’t know why you’re apologizing to me like I’ll feel disappointed about that. I misunderstood your last season because that’s a phrase often used when someone means the player is bad. Like if a TV pundit says “I’m not convinced ‘player x’ is the best” that typically means they really don’t think they’re good or don’t like them. So I apologize for taking it the wrong way. We’re on the same side!

I agree. People forget quickly how they said Leno was one of the Premier Leagues best goalies.. that means we now have TWO of the best in the PL? Either way, the battle between them is really healthy!

Guns Up
Reply to  High gooner

I’m not so sure we DON’T have two of the best keepers in the PL, at least based on recent form. Not as though it doesn’t happen – van der Sar/de Gea and Courtois/Cech come to mind. To be clear, I’m not comparing our current two to those pairings, just saying they have both been excellent when played.

Just ordered the new goalkeeper kit with Martinez on the back.
Will be hugely frustrated if we end up selling him in the summer ?

you have to keep Martinez in net for this one because he’s the active keeper and he’s been hot. Leno’s been out too long and will be rusty. If Leno is number 1, then he can start the new season in mid-September. If Leno has a problem with that then we know who to sell if we don’t want to keep both.

I’d prefer both to stay myself and fight over the number 1 all year. Then maybe sell one after next year.

Extending Luiz was a mistake, not cashing in on Mustafi when this is probably the only window we could get anything for him would be even worse. Fair play to him for his solid performances recently, but he’s just not the future. There must be a team willing to pay 15-20 million for him. Take the money and run.

Giving Luiz a new deal is shooting yourself in the foot. Giving Mustafi a new deal is going full Black Knight from Monty Python’s ‘The Holy Grail’ dismemberment.

Fair play to mustafi, he’s come back from beyond the dead.
A new contract is a tough one though. In some ways I feel we need to phase out the core players who have got us into this mess.

All thanks to that prick Raheem Sterling fouling him. Thanks Raheem, you fucking prick!

That was nasty, but of course Raheem is not that sort of player…………………yeah right.

A tad harsh, but I can empathise with you sentiments nonetheless…

He’s been excellent since Arteta has taken over. Aside from tactical innovation, this is the other encouraging sign with Arteta that he is able to improve on players on hand. Xhaka also testament to this work. As mentioned many times, Mustafi wins a lot of headed clearances for us and his distribution from the back whilst not Xhaka is a reason why he starts. He’s also relatively indestructable bar current knock and he is aggressive in challenges. Is negatives of course his tendency to switch off (recent games) and decision making. But all defenders have been culpable. I think come… Read more »

@Santori I don’t know why people don’t understand your points because you make alot of sense here. I think people are unable to take off their “glasses with bias pasted on them”.

I feel like it might be prudent to start Holding and Sokratis this weekend. Holding seems to need more reps, and Sokratis must be rusty as fuck right now. If anything happened to one of the other defenders (Luiz could use a rest right now, I imagine), well, I guess it’s worked before, but Sokratis isn’t exactly our BFG.

Santori
Reply to  Timorous Me

Tierney has been diligent in a back 3. Luiz and Holding are also better in a back 3. with Kolasinacor AMN as options at wingback, it may help us keep an eye on Chelsea’s speedy assets wide. The bogger problem of course is Pulisic on their left who can be a handful. Bellerin needs to be supported by someone behind him well (likely Holding) Mustafi would prob be better in the role but not available. Sokratis is a wild card as you say having not played for a while. But remember Metersecker came in and did a job for us… Read more »

Gutted for Mustafi. He interviews well and seems to understand that he’s not been the most popular but he’s dug in and come on well. I’m pleased for Holding and want him to grasp the opportunity again but Mustafi’s superior athleticism would have been useful against Chelsea’s attack.
C,mon boys, bring it home for the fans and the players that can’t make it and give Arteta his first cup as a manager!

Blessing in disguise. Him and luiz in the same defence gives me nightmares.

The Watford game would be ideal to check out who will partner Luiz in defence. Try Sokratis also as we may need backups in Wembley.
Chelsea will be opting for fast counters like they did against Pool.

pretty sure it will be holding and tierny in the back 3 with luiz, arteta obviously doesnt rate sokratis( dunno why as i think hes a decent defender) if kolasinic is getting picked at centre back ahead of you you know something is wrong.

Rob Holding played Really well In his last final when tutored by an Experienced Pro.