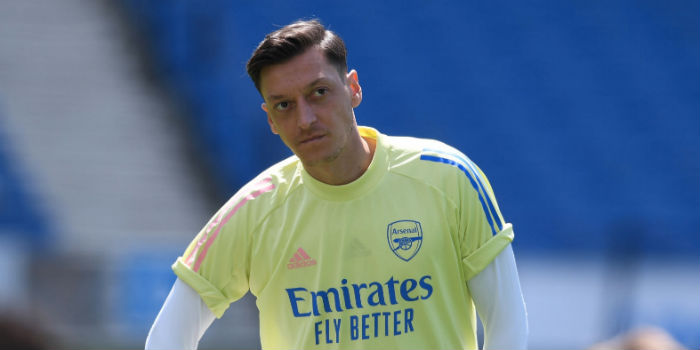 After the first couple of post-lockdown games, Arsenal’s injury situation was so dire it looked like we might end the season fielding Freddie Ljungberg and Mikel Arteta in midfield.

Thankfully, things have died down on that front. Ahead of Tuesday’s clash with Leicester, Mesut Ozil remains the only player (who could play again this season) who is a doubt due to an injury.

While Matteo Guendouzi nurses a bruised ego, the German continues to contend with a sore back and tomorrow’s clash with Brendan Rodgers’ side will likely come too soon.

Our long-term absentees remain exactly that. Pablo Mari is out until October with an ankle sprain, while Gabriel Martinelli, Bernd Leno and Calum Chambers are nursing knee problems of varying seriousness.

Our German keeper is the closest to a return but even if he gets back into full training, estimated for four weeks time, the campaign will be done.

Does anybody really believe this back injury story about Özil?
It’s everytime a manager leaves him out of the squad that this mysterious injury occurs. I’d think he has no intention to train, if he knows he won’t get picked at matchday anyway so he rather says at home and plays fortnite.
Can’t believe he has managed to act like this for years and is still here, earning 350.00 a week.

Could be that injury occurs, then the manager leaves him out as a result?

it’s the other way around. He get’s left out, then he get’s injured.

“Back injury” is a wonderful innuendo for spineless.

He never or very rarely actually gets injured on the pitch. It must be those damn chairs on the bench…

How many people do you know with a “bad back” and spasms? It’s a real thing and they have flare ups especially if they’re athletes, sounds very painful. Once you take it at face value it changes your whole perspective of the situation. He’s just a player trying to get fit. I’ve had consistent knee problems for a few years and I’ll tell you it’s awful when the problem comes back when you’re getting back into your rhythm. Sometimes your body just won’t do what you want it to.

They used to call it a “dead leg”. Before that, “upset stomach”. There’s always some code word. Not excluding the possibility he actually is injured, but…

The article is just another opportunity to talk Ozil

The article is an injury update. Ozil is injured. Whether we choose to believe his injury or not it’s seems only natural for him to be included
in this piece

Part of Ozils massive weekly pay is made up of appearances, win bonuses etc! I strongly believe that him not playing is a way for Arsenal to save some money, especially after not taking a pay cut.Also he has not done himself any favours with his performances on the pitch the past couple seasons.

Is this correct? I’ve not heard this before. If so, it does make some sense.

Should make some sense actually, but I strongly doubt this unverifiable update. Should have been in the news long before now if true.

If this is true, he and Dr Oetker have price him out of a career.

I think the game changed around Ozil, and he failed to adapt. Having said that, for everyone harping about his wages – for his new contract, at 18M per year, for 4 years it comes out to about 72M, the transfer fee for Pepe.
Personally, the value for that 72M is not there with Pepe.
So while it is unfortunate we have Ozil on such wages, let’s get some perspective, chalk it up to another loss and move on.

Rather a pointless comparison. Pepe has delivered in bursts, and is a 25 year old who will (we all hope) develop into a great player. Ozil’s trajectory and contribution is very, very different- as is his attitude, I’d say. You could compare him to Martinelli’s transfer fee and presumably draw the opposite conclusion?

mjc1892, perhaps my point was lost, what I’m trying to say is that, we will have some losses with with 33+ players. I was illustrating this with Pepe who has currently not delivered commensurate with his transfer fee. And in your example, you argue that Martinelli has exceeded his price package.
In the end, perhaps we can agree that Ozil may never be good enough for the current standards of PL play.

Also consider that Pepe would still have decent sale value given the length of his contract and his age. Maybe at the moment not what we paid for him anymore, but we certainly don’t lose 72 million with Pepe. Özil has basically no sale value, because first of all, he refuses to be sold – which is his right. And even in case he would allow to be sold, I cannot imagine substantial offers for a player with his age and contract duration. Finally, if I was an interested club, I guess I would also state the “injury” history in… Read more »

Chatting about Ôzil is often problematical, as opinions can vary so widely. Fortunately for me, I know nuzzink about his injury, as to whether it is a genuine back pain, or not – so I accept what Mikel says about it. It is hardly Ôzil’s fault that the Arsenal powers to be decided it would be OK to pay him what seems to be an exorbitant weekly wage. Umm, ‘exorbitant’ seems a pejorative adjective in the circumstances, so can I change that to ‘a lot, per week’? So, in terms of those two matters which can cause disgruntlement, it would… Read more »

I’m a major major fan of Ozil and I genuinely haven’t enjoyed looking at an individual play for arsenal as much since Van Persie. That being said, even I can see his position at the club is completely untenable as he hangs around like a bad smell over the club. The sooner he goes the better but I will still look back with fond memories of some of his better displays filled with cushioned touches and weighted passes other players could only dream of pulling off.

Emi is deputising well for Leno. Solid between the sticks.

Hardly worth maintaining the pretense of Özil’s “back injury” is it? If it were any other workplace he’d have been called out as a lazy lead-swinger long ago.

Both bottlers have injured egos. No ambition, pride, or self worth. Bloodsuckers.