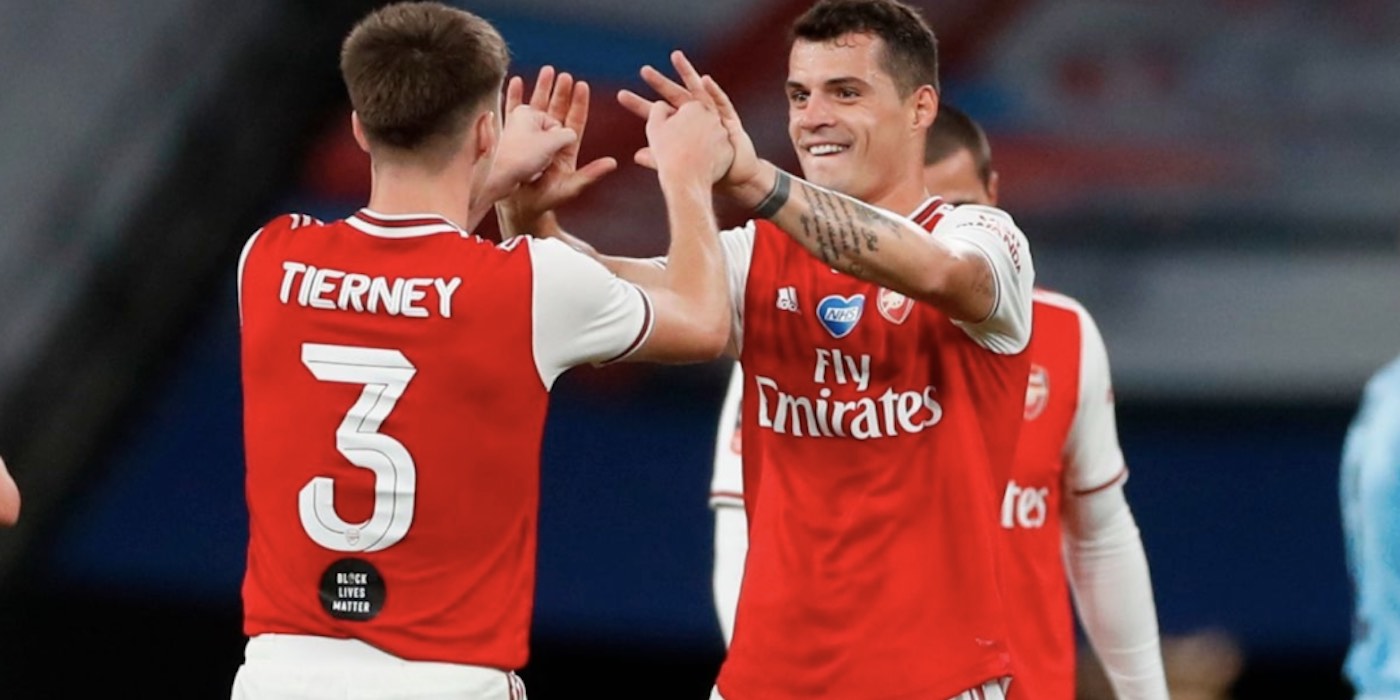 Kieran Tierney was a much-loved figure at Celtic, and Arsenal fans will find it very easy to understand why.

Not only does he play with huge desire and commitment, he’s also really, really good, and since the restart has become an increasingly important part of the team.

The 22 year old has had a strange season, arriving injured, picking up another serious injury having made his comeback, and then enduring the lockdown and complete lack of football.

It meant he went over 6 months without playing, but now that’s he’s close to match fitness again, he’s impressing Mikel Arteta and his staff, as well as the Arsenal faithful.

“I think I can talk for all the staff when I say we are delighted with him,” said the manager.

“He’s a joy of a kid. He’s always willing to do more, he always wants to train harder, he wants to push himself more. He had some difficult moments since he joined but hopefully he feels settled.

“We really like him and we really support him. I really appreciate everything he’s done since we joined.

“For me, he’s a player who is a really good role model for any other player in the squad.”

The Scotland international provided a lovely assist for Pierre-Emerick Aubameyang to score the Gunners’ second at Wembley, and hopefully we’ll see further contributions like between now and the end of the season

Arteta also spoke about Granit Xhaka being an example to others after he overcame a difficult situation, citing his willingness to work hard and a genuine desire to play for the club.

With both Mesut Ozil and Matteo Guendouzi still excluded from the team, the Spaniard insisted a similar attitude could benefit them.

“That applies for any player and any member of the staff,” he said. “All players know this.

“If you show that, that you decide to do the best not only for yourself but for the team and for the club, I think everyone will welcome you. It’s not just me that needs to give the green light, it’s everybody that has to be supportive.

“You need to feel that support from everybody because otherwise it’s a very uncomfortable situation.”

No filters. Sets standards within and for any future recruits.

Tierney has quality and it is the first thing about him not the attitude that he shares with Eboue, El Neny, Coquelin, Iwobi. He is a Ramsey of LB.

Best LB we have had since Cashley Cole.

Only said that yesterday, dare is say Lauren good…….

He looks great but I would still rate Nacho higher – at the moment, at least.

Tierney looks like the no-nonsense type of player that would make a great captain one day.

Super Eddie off the bench.

What do you guys think?

Only change from me: Saka replaces Pépé and AMN as LB.

I would actually consider putting AMN on at rwb. Pulisic is quick and dangerous, and AMN is the best standup tackler in the team and has great recovery pace. Saka as lwb. Both will be good going forward, and on their preferred foot for crossing. And the few times we’ve seen it, Pepe and AMN seem to combine well. Everything else I agree with. Holding over musti maybe even if he’s fit, because Chelsea have big y’all boys on set pieces.

holding is slow,and will get turned inside out,

VAR will solve the problem
Reply to  David C

Definitely agree…AMN was brought in to nullify Mahrez but i think Saka gives more attacking options from our left. AMN did super good defensively but few times during 2nd half his crosses or passes on the attacking 3rd wasnt good enough. Which is understandable because he tried them with his weaker left. With Saka, those crosses would cause more damage. imagine the confusion on the Chelsea RB’s head…should he mark Auba or go with Saka or try Tierny (when he decides to interchange with Saka)…it would be a bit like Cole – Pires – Henry on the left for our… Read more »

Tierney, he is a braveheart.

Buy of the season in the PL

Really like KT for his work rate and humility, so rare in this day and age.

He’s a proper player is Tierney. Intelligent on the ball and a good defender without it. Good attitude too. Really excellent signing.

Tierney is fast becoming my favourite player. The fact that the coaches, team mates and supoorters of both his former club and his current one seemingly have nothing but positive things to say about him speaks volumes about his ability and attitude. I would argue he is our best signing of the season.

Bellerin is also slowly starting to regain some fluency. That’s the other side of the equation that people tend to forget bc they have a hard on for one player.

We need a balanced team with equal effort and ability on both flanks.