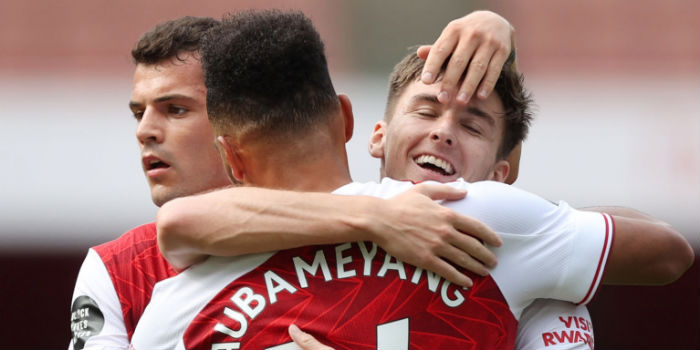 Kieran Tierney says he knew life at Arsenal wasn’t going to be easy but admits his injury-hit first season at the Emirates has represented the toughest year of his life.

Signing from Celtic with a groin problem, the Scot went on to pick up a dislocated shoulder before Christmas and then had to wait until Covid-19 lockdown restrictions were eased to start his first game under new boss Mikel Arteta.

In the space of the last two months, he’s proved his quality, become a regular starter and today notched his first goal in Gunners colours along with his first Premier League assist. It’s been a roller coaster ride and the FA Cup final is still to come.

After the 3-2 win against Watford – a result that sealed eighth place in the table for the Gunners – Tierney told Arsenal.com: “It’s been the toughest year of my life. I’ve had the injury and a lot of new challenges but you need challenges, you need to be uncomfortable.

“You need to challenge yourself to improve. I worked hard every day and I knew it wasn’t going to be easy coming to this massive club full of great players. I knew it was going to be tough coming in and trying to get my place in the team.

“I’m just grateful for every opportunity I get to go on the pitch and give my all. I try to repay the manager’s faith by working hard and trying to put in good performances. It’s all about the hard work.”

No doubt, Tierney will be looking to make further decisive contributions in attack. Two weeks ago he teed up Pierre-Emerick Aubameyang’s second goal in the FA Cup semi-final win over Manchester City and the duo traded assists today.

The Scot calmly slotted home with his left foot to put the Gunners two goals ahead at the Emirates on 24 minutes and then turned provider, finding his captain with a long throw that the striker converted with an overhead kick.

“I didn’t know what to do [to celebrate the goal] so I just turned around,” Tierney added.

“I think it was shock! I’ll take it. It was a good ball from Auba as well so it was a good day for me personally.”

Think there’s a typo in here blogs. Says he signed from Chelsea, when in truth he has never been that much of a darn nasty turd. Celtic.

But I do share your love for Tierney. The ultimate player for those that love pure commitment and old fashioned footballing qualities. I haven’t bought an official club shirt since I was about 15 (20 years ago) but I’m thinking of getting a retro kit with his name on the back. Just because I can.

I am planning to get his name on the new kit. I’m glad the club has supported him through his tough times earlier this season.

I imagine he’d be a great role model for youth players to try to emulate both on and off the pitch.

Before his acquisition I was worried that getting a left-back would hinder our academy prospects such as Tolaji Bola. But I must acknowledge that Kieran Tierney is special. It’s a shame he missed the reaction from the fans after scoring his maiden goal in an empty stadium.

Lord of the Typos
Reply to  Safe Hands

Looks like Andrew Allen has been on the beers tonight

i can’t sleep. I keep refreshing to see if blogs has changed it yet.

He obviously had something on his mind!

The optimist with little hope
Reply to  Safe Hands

I’m pretty sure it’s a subtle form of pre-final anxiety. Last night, I had a dream that a 12 foot tall Giroud was chasing me around London with a vanity mirror saying what a beautiful final… We’ll see about that Mr G. We shall fucking see!

One of the few bright spots of this season. I love the guy. Thought he did pretty well today defending against the pacy Sarr. If he can stay fit, he could really progress next season. His crossing is so good I could even see him reaching 10 or so assists, and the fact he doesn’t mind a shot makes him even more of a problem for defenders. His and Auba’s partnership on the left could be truly exciting. (Don’t go Auba!)

Imagine if we had someone who could, y’know, head the ball.

I reckon Tierney Martinelli could be a hell of a combo.

I wish some of the executives showed his commitment & work rate while they are ‘outsmarting the market’. It would then show Arteta they were singing from the same hymn book.

I mean…they kind of did by signing him (KT).

Ceballos was good business too.

I absolutely loved his long throw into the penalty box for Auba’s goal. Took me back to the good ol’ Stoke days, except it was us doing the long throwing. I’m just so glad we have a player of his quality in our team. If there were 9 more of him, in each position, apart from Auba and Martinez in goal, we’d have won the league.

“signing from Chelsea” though! 🤯🤯

We did great business signing him. As we did with Martinelli, Guendouzi etc. We need to add more quality young players like this.

Chelsea???
Don’t thinks so.
It was Glasgow Celtic, best team in Scotland.

PLEASE stay healthy KT! If he stays healthy, he will be a big part of our next good team.

Time and again he saved Arsenal. DL conceded a penalty. Hopefully
he wont revert to Dr Jekyll and Mr Hide again. Incidentally MU have been awarded a staggerring 14 spot kicks. Why is this so?
I noticed Arsenal are easily beaten at the byeline. They also conceded many corners.The blues have big and powerful players .
Hopefully Arteta can devise a plan to win the cup. If not Arsenal will be consigned to the wilderness the next few seasons.

KT signed from Celtic. Delighted he has scored a maiden goal for us. And those tucked in shirts are hot.

Good man. Shining star plenty of engine and diligent in defensive work. BUT lacking physical stature in the back 3 so 50-50 if you put Kolasinac infield you get the strength and height but propensity to switch off, if you have Tierney, he can be taken in the air. And we know they have Abrahams or/and Giroud both eager to attack the near post. Very tricky call for FA finals. I almost want to pick Tierney and put diligence ahead of physicality but options not great. They have pace and trickery wide too with Willian or Mount so very very… Read more »

If you are suggesting it’s between KT and Kolasinac for a spot in the cup final team you must be crazy.

Kolasinac, although he tries hard, is really limited. His lack of pace was really shown up yesterday when he came on and Watford got a lot of joy on the left when Tierney pushed up. Honestly, I wouldn’t have him near the matchday squad if everyone else is fit.

Tierney has been one of the brighter lights this season, even though he was out for months. Proper class act and personally think he’s one of our top three most important players. Alongside Auba and Leno (I know Martinez has been an absolute worldie but Leno is another level).

Wouldn’t bother me if everyone else was sold and we started again. Just keep hold of those three!

Oh and Martinelli and Saka. They’re gonna be a world beaters. Basically keep those five, sell everyone else.

At the start of this season I got the bus over to watch a Celtic game with my father – Was sat beside a die hard Celtic fan who for 3 hours told me in great detail how over rated Tierney was; The effort and passion behind the bitter eyes made me sure we had signed a baller.

Tierney was one of the best buys ever along with Auba, all that is needed is a back 3 to support him and possibly Bellarin on the other side. He like to go forward. I love that. Myheart drops when the ball gets to the wing at the halfway line then gets patted back to the Keeper, A more dynamic midfield would help. I keep thinking that Lacca would be good there. He tackles with enthusiam and sucess. He knows what a striker needs. He has a great engine. Try him instead of Zaka? Saka on left wing Auba in… Read more »

When we signed him and he was injured and the ubiquitous moaning ensued someone here went against the grain and said we had every reason to be excited by Tierney’s arrival. Whoever it was who said that was absolutely right!

Tierney is cool. Keep up the good work, Bro.👍💪