With Jordan Nobbs back to full fitness and Jill Roord signed from Bayern Munich last summer, Joe Montemurro shuffled his pack by playing Danielle van de Donk as a wide forward last season. DvD’s preferred position is more central but with Little and Nobbs playing the two advanced number 8 roles in midfield, van de Donk played largely from the left of the front three, sometimes swapping to the right.

I use the phrase “from the left” rather than “on the left” pointedly. The reality is that Daan had total liberty to come inside and act as another de facto number 10. While Joe Montemurro makes certain tweaks and adaptions for specific opponents, his overall philosophy is uncomplicated- put as many of your good attacking players on the pitch as possible and you will overwhelm most opposition.

I asked DvD about the slightly wider role after the 2-0 victory over Spurs back in November and she told me, “It’s not my favourite role, but that’s the ask of me for the team and I am doing the job. It’s still not a bad role at all to be fair, it could be a lot worse! I’m scoring some goals from there this season which makes everything better.”

With five goals and four assists in the WSL last season, her end-product has been good from this position. The Dutch attacker has liberty to move inside, especially with Lisa Evans maintaining the width of the pitch on the opposite flank. When van de Donk drifts into more central positions, Katie McCabe provides the overlap on the left.

The away game at Reading in December provided a good illustration of van de Donk’s ability to create from wide and central areas. For Vivianne Miedema’s first goal, she has picked up a central position between the lines to feed Miedema in the area with a typical, number 10 style through ball.

In this game, Joe Montemurro picked Viki Schnaderbeck at left-back in order to attract Reading pressure to that side of the pitch, creating the opportunity to switch the ball quickly to the other side of the pitch. Quick switches in play are a key tenet of Montemurro’s style, attracting the opponent to one flank, freeing up space on the opposite side of the field for a swift switch. We see this tactic executed by DvD herself later in the Reading game with her delightful first time through ball to Vivianne Miedema from the left-hand side.

What a way to top it off, @ArsenalWFC ? pic.twitter.com/sAaYLX3BIn

van de Donk also held the key to this tactic in the 4-0 away win over Brighton in January. She is the beneficiary in the opening minutes. In this game, Leah Williamson played as an auxiliary right-back, again attracting Brighton pressure to that side of the pitch. Leah takes advantage of this with a quick switch to van de Donk on the left, who runs through to score.

Later in the same game, Daan chalks up another assist with a clever pass from the left, again shaping her hips to swing the ball in-field first time from the left touchline. This time it’s Jordan Nobbs that runs into the area to receive the pass and finish after an excellent dummy from Miedema.

Playing from the left also allows van de Donk to operate as a second striker when Miedema wanders away from the area in search of the ball. We see this most obviously when she opens the scoring in the 2-1 defeat at Chelsea in October. Miedema drifts to the right and van de Donk ghosts into the area to fill the space, allowing her to collect Viv’s dissecting through ball to score. Two weeks earlier, the Dutch pair executed a similar move to open up the Brighton defence.

Depending on the game state, from the left, van de Donk can operate either as a 10, a number 9 or as a left-winger. However, one of the real advantages of having her in the front three is her ability to press defenders. Playing from the right against Birmingham in January, look at how quick she is to sniff out a slightly loose pass from Blues ‘keeper Hannah Hampton before putting a cross into the unmarked Jordan Nobbs [unfortunately the goal was chalked off for offside].

Her tigerishness out of possession is of great value when it comes to forcing turnovers high up the pitch, look at how hard she makes it for Lewes to try and play out from the back during February’s FA Cup tie in the clip below. According to statsbomb data, Daan makes 21.86 pressures per game in the WSL, more than any other Arsenal player. 14.2 of these occur in the opponent’s half. She also makes 24 aggressive actions per 90, a total only bettered by central midfielder Jill Roord [24.44] in the Arsenal squad.

Arsenal are a possession team but they do work hard on creating turnovers and transitions. As one of the most energetic and aggressive players in the squad, it makes sense to concentrate van de Donk’s pressing abilities higher up the pitch. She makes 1.10 interceptions per 90 and only Leah Williamson [1.17] can boast a better average than that in the current squad.

Danielle’s attacking numbers are all perfectly sound. She outperforms XG with 0.31 non-penalty goals per game [only Miedema and Nobbs have a higher average] from an XG of 0.26. She converts 23% of her shots, adjusted for penalties, only Miedema is a more accurate shooter [Kim Little converts 27% but that number is slightly skewed by spot-kicks]. 45% of her shots are on target and again, adjusted for penalties only Miedema hits the target more often. [Excluding Viki Schnaderbeck whose 100% shots on target ratio is a tad misleading considering she only mustered one shot last season!] van de Donk’s shot map for the season is one of a player who uses the left flank as a springboard for runs into central areas. 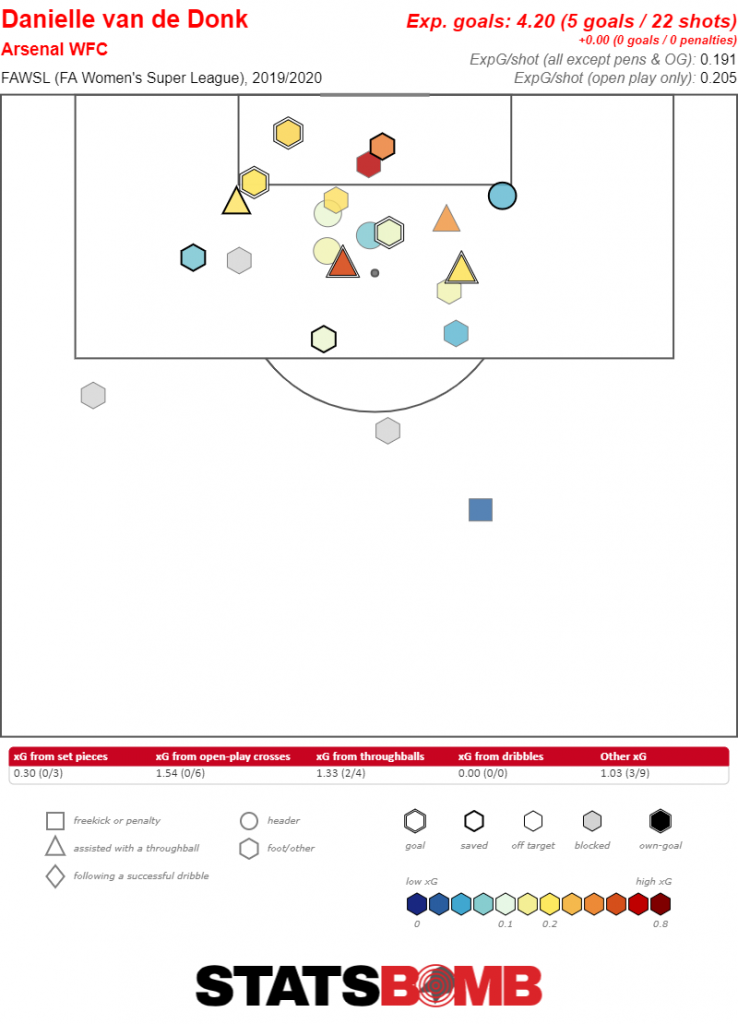 Playing from the flank has enabled van de Donk to play a hybrid winger / number 10 / support striker role. Arsenal’s style relies on fluidity and interchanging of positions. The security provided by Lisa Evans on the right allows van de Donk to play more centrally, while Miedema’s tendency to wander away from the area means DvD often ends up filling space as a second striker. Her real value in the front line though lies in her physical prowess and her ability to pressure opposing defences into turnovers or rushed clearances.

Previous articleArsenal 2-0 Man City: By the numbers
Next articleCeballos: I worked so hard to show Arteta I could play for Arsenal

It is very interesting to see old-school number 10 in modern football. But in men’s game this position is almost extinct. In games against weak teams DvD was great in founding space and creating chances. But in games with Chelsea or other tough opponents who does not leave a lot of space, there were problems. Arsenal middlefielders could not create chances themselves, because there were no structure, DvD could be here, or there. Imho, her best position is second striker. Arsenal could use her in 4-4-2 diamond in front two, with Evans as attacking RB. Mccabe is ineffective as LW,… Read more »

Interestingly, DvD did kinda play that role in the Conti Cup Final where Arsenal outplayed Chelsea (but wasted too many chances).

Arsenal don’t really play with a 10 either, the reality is that DvD, Viv, Kim and Jordan rotate positions quite freely.

I think it is a little harsh to say the girls wasted chances. There were not too many sitters that went begging. The fact is Berger played a blinder that day and without her in goal we would have scored 4 or 5. To me it appears that Joe’s team is set up for positional play in the traditional sense but no one player is allocated that position. This is what flummoxes lesser teams since they are trying to (wo)man-mark DvD or Viv or whoever and they keep popping up in unexpected places. The more savvy “top teams” have seen… Read more »

Very enjoyable article. I don’t know much about the women’s game but focused tactical gameplay of individual players really helps!!