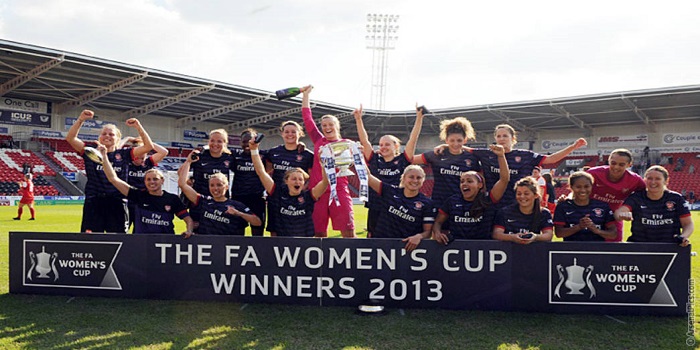 The FA has today confirmed that the Women’s FA Cup will be concluded during the early weeks of next season. The competition was suspended at the quarter-final stage last season when the coronavirus pandemic saw the 2019-20 season terminated.

Arsenal Women will now play their quarter-final tie at home to Sp*rs on the weekend of 26/27 September, with the semi-finals to take that place the same week on 30 September / 1 October. The final will be held at Wembley Stadium on 31st October. The final is usually a big revenue raiser for the FA with crowds of over 40,000 now commonplace at Wembley. Initially discussions focused on the cup resuming in August but it looks as though the FA have taken the decision to wait until crowds are allowed back into stadiums in some form.

The WSL season was decided on a points per game basis last season with the Gunners finishing 3rd. They will complete last season’s Champions League in a mini-tournament in San Sebastian at the end of August, where they have a quarter-final tie with Paris Saint Germain to play. Arseblog News will have full coverage of that tournament in the coming weeks. The 2020-21 WSL season is due to resume on the weekend of 5/6 September.

The WSL launches hall of fame to mark 10-year anniversary

Thanks for the update, Tim. Is there any likelyhood of a friendly or two earlier than these matches as in the prequel to the Premier League restart? My concern is that without having played a complete match for 4 or 5 months, and with half a dozen new players who have not even played with Arsenal before, the girls could potentially have 3 Champions League games in a week, followed by potentially 3 FA Cup games in a week before launching into a new WSL season. This seems to be a recipe for muscle pulls and out of match fitness… Read more »

Yeah there will be a friendly or two- most likely against other due to WSL teams due to the testing situation. PSG are finishing the French FA Cup before the CL so they will be coming into our CL tie warm…

Another 6-0 vs the spuds would be a good warm up!

How good could that be?
Two ??in the bag by November.