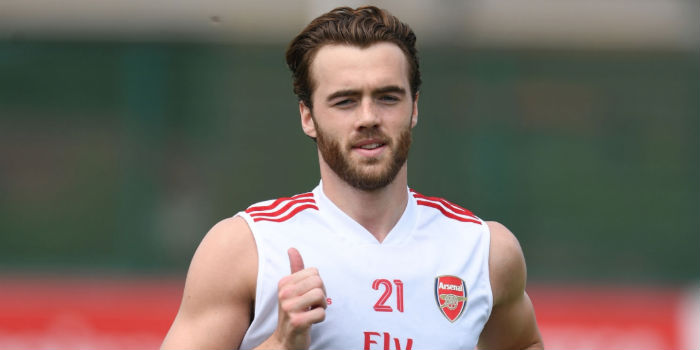 Arsenal have issued their first injury update since the end of last season, just ahead of this evening’s friendly with MK Dons.

In truth, there’s not a lot we didn’t already know. Bernd Leno is fit again after the knee problem he sustained against Brighton, and is in the team for tonight’s game.

Calum Chambers continues to recover from the ruptured ACL he picked up in January, and the club say he is doing light running and ball work at present, and is aiming to return later this year.

Pablo Mari and Shkodran Mustafi underwent surgery for ankle and hamstring problems respectively, and are looking at returns to full training in September and October.

Meanwhile, Gabriel Martinelli is in Brazil as he continues his recuperation from knee surgery, returning to the UK next week, and the time-frame for his return to training is much the same – by the end of 2020 with a comeback early in 2021.

Hopefully the chaps ease back into action later, with kick off at 6pm. William Saliba is starting, and let’s hope we don’t pick up any more injuries.

You can watch the game wherever you are in the world via arsenal.com (you need to sign up though!)

I got really worried about Martinelli, thinking of Wilshere and Diaby who suffered major setbacks whilst still in their development that they never recovered from.

But then I saw the Michael Jordan documentary “The Last Dance” and that dude had a potentially career threatening injury in his early career.

I hope Martinelli has enough natural talent and instinct to quickly bounce back and not suffer too much from an agonisingly long time on the sidelines.

Sounds like Martinelli had a cartilage injury, a relatively serious one, but those are generally a lot less of a concern long term than torn ligaments. I’d imagine he will be fine.

I agree. There were question marks around the treatment regime under Wenger’s tenure though. Players seemed to take longer to recover from injury and had more setbacks during recovery. A lot of money was certainly spent upgrading the relevant facilities at London Colney but I suspect it was down more to what was being done. Anyway, hopefully that’s behind us now.

Not true at all. Arsenal have always had excellent medical teams and the feeling we had more injuries, or they took longer was perception rather than fact.

Yes it is. There was research done some seasons ago comparing Premiership teams injury/recovery records and we were certainly not among the best. There are also quotes from Wenger saying that more resources needed to be allocated to the whole medical side of the club because of said poor record (which is why several £million was spent at London Colney). You only have to look at numerous examples of players injured and not recovering as expected. We need to be honest about this, not viewing it through rose-tinted spectacles!

The issue was taken serious enough to have every pitch at the training ground changed because of it.

I hope we don’t pick up any injuries against the Dons. The players have only had a few weeks break since the Cup Final so may be more vulnerable to knocks. Fingers crossed.

Based on the line-up we are more likely to sell Bellerin and Lacazette, than ANM

Seeing Elneny, Holding, AMN in the 11 makes me think this is some sort of showcase as opposed to any sort of real preparation match.

Seeing Elneny in an Arsenal shirt again fills me with dread. We are lacking in that area and he certainly isn’t the answer, whatever the question.