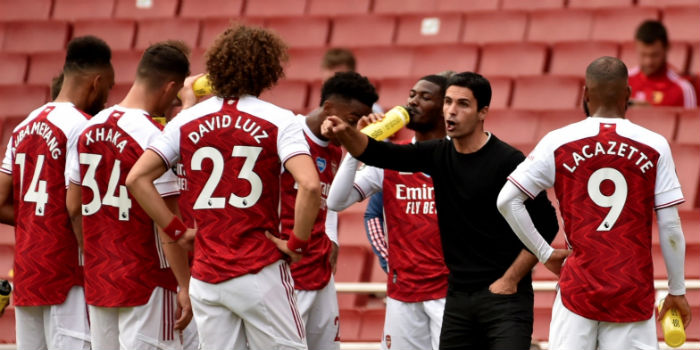 Arsenal will face MK Dons this evening at the Stadium MK as both sides step up their pre-season preparations.

The Gunners side is expected to be predominantly made up of academy youngsters but a couple of first team players could make an appearance.

The majority of the senior squad were due to report for their first day of pre-season today following a three-week break since the FA Cup final win over Chelsea on 1 August.

The match will be played behind closed doors but will be available to watch via the club website and YouTube to viewers in the UK from 6pm.

Arsenal face Liverpool on Saturday in the Community Shield in what is likely to be a very low key affair at Wembley. The Reds are currently in Austria on a training camp and beat Stuttgart 3-0 in a friendly at the weekend. They take on RB Salzburg this afternoon.

The Gunners first game of the new Premier League season is away at Fulham on 12 September.

It’s times like this when I’m glad that Wimbledon became the MK Dons.

Oh, so people would rather play the crazy gang in a preseason friendly.

What a roundabout way to start the season.

Crickey, I hadn’t realised the players got this little time off. And then next summer it’s the European Championships or Olympics for many of them so no long break then, followed by the fun of a mid-season World Cup in 2022.

The World cup is scheduled for November 2022…

So I guess the main worry is this season and Euros.

Well they DID get a 3ish month “break” during Covid… So their hammies did get some rest at least.

I hope we crush them. Mk dons became my 2nd most hated team when they moved to milton keynes and my favorite venue and the only decent thing we had in milton keynes, the sanctuary was knocked down for their poxy stadium to be built.
Fuck the mk dons.

A gentle warm up for a far stiffer test on Saturday. Picking up no injuries is the main objective I guess, particularly after such a short break since the Cup Final.

Can’t imagine that there’ll be anybody playing in both.

I would play Ozil and Guendouzie tonight, and maybe in a few more pre-season games. Everyone makes mistakes, and I believe they deserve a another chance. No one is perfect, and if the play good, with a great attitude that will be amazing. If they play sh*t, with no passion then we wont have any regrets. Let’s start the season on a positive.

You’re in the Spirit, Bro.

The worst single thing that the club and/or Arteta could do going into the season will be to budge on the Ozil stance, especially after the recent Ozil media outing.

No player can ever be bigger than club. The Club should hold its ground as a matter of principle even if that will mean relegating Ozil to the reserves for the rest of his stay at the club.

The beginning of hostilities.