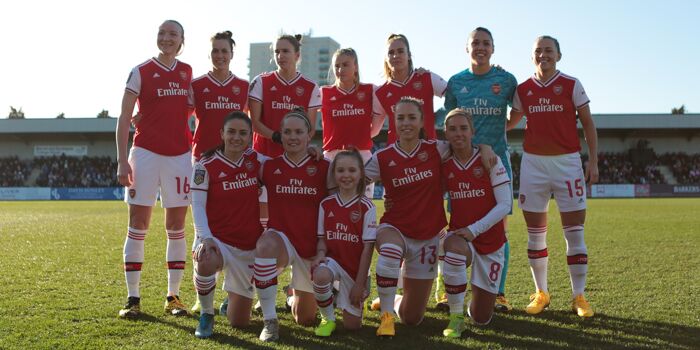 Should Joe Montemurro’s Gunners side beat Paris Saint Germain, they will face the winners of Bayern Munich v Lyon in the semi-finals next Wednesday, with the final the proceeding Sunday. Arseblog News will bring you coverage of each game Arsenal are involved in with previews and exclusive match reactions from the players and manager. Below is a lowdown of sorts for the final eight teams involved in the competition. [Players names are italicised to show they are former Arsenal players].

? The #UWCL quarter-final schedule was confirmed today – and we now have kick-off times?

Catch up on how Arsenal made it to the quarter-finals here.

Arsenal have seen a turnover of some squad players this summer. The list of players leaving looks sizeable, but Veje, Mitchell, Carter, Grant and Flores didn’t start a WSL game between them last season, with Pauline Peyraud-Magnin and Louise Quinn starting three games apiece. They have reinforced with world-class left-back Steph Catley, experienced Matildas goalkeeper Lydia Williams, as well as Wolfsburg full-back Noelle Maritz also come in with 20-year old signing for the future Malin Gut.

Montemurro’s side eased into the quarter-final with big aggregate victories over Fiorentina and Slavia Praha. PSG will offer far stiffer opposition in the quarter-final. Arsenal are the only one of the remaining sides in the competition not to have qualified for next year’s tournament, they will need to win the Champions League to re-qualify.

This time next month, we'll be back under way in the @UWCL ?

PSG tempted out of favour Swiss forward Ramona Bachmann from Chelsea, which is comfortably their most eye-catching signing this summer. Alana Cook spent some time on loan at Reign this summer but also extended her PSG contract. Nadia Nadim, Paulina Dudek, Formiga, Luana, Ariana Criscione and Kadidiatou Diani have also extended their contracts this summer.

PSG are playing catch-up with the almighty Lyon domestically, this season they put up a strong fight in Ligue 1 Feminine, they were three points behind the leaders with Lyon and PSG still to meet when the league was terminated and the table determined by points per game. Striker Marie-Antoinette Katoto finished top scorer in the league with 16 goals, the same number Vivianne Miedema managed in the WSL.

PSG Ultras supporting their women’s team in the Champions League on Wednesday night in their game vs Chelsea Ladies.

Bayern have undergone a second summer of large turnover within their squad following Jens Scheur’s first season in charge. They will have been disappointed not to have put up a sterner challenge to Wolfsburg at the top of the table and now they have lost their captain Melanie Leupolz to Chelsea and senior defender Kathrin Hendrich to Wolfsburg. In forward Lea Schuller they have recruited one of Germany’s most promising talents.

Bayern reached the semi-final last season before losing to Barcelona and they face an uphill task to eliminate holders Lyon in the quarter-finals, especially given the level of turnover in their squad. The Bundesliga was completed in July, but there won’t be much of a physical advantage with Lyon set to finish the Coupe de France, providing them with an ample tune-up opportunity ahead of the tie.

Dzenifer Maroszan and Sarah Bouhaddi signed new deals after their prospective moves to the USA fell victim to Coronavirus. Lucy Bronze and Alex Greenwood have agreed short-term extensions for these matches before they both join Manchester City and Jodie Taylor has joined on a short-term loan from sister club OL Reign in Seattle. Star striker Ada Hegeberg and defensive lynchpin Griedge Mbock are both injured.

Lyon have won the last four Champions League titles and have won a record six in total. They are hot favourites to make it five in a row in Spain and with good cause. Their squad represents a who’s who of women’s football but this year, their competitors are getting closer and there is a feeling that the culture at Lyon has waned, with players often parking themselves at the club for a couple of years to get their Champions League medal before leaving. They are still the best, but the gap is closing.

The greatest women's team on the planet ? pic.twitter.com/p24UayMYY3

Nobody would have been more relieved by UEFA’s ruling that new signings will be allowed to take part in these matches than Atleti- both of their first team goalkeepers left the club this summer and have been amply replaced by Pauline Peyraud-Magnin and Hedvig Lindahl. Prior to UEFA’s u-turn on fielding new signings, they were facing the prospect of fielding a youth team ‘keeper.

Conquerors of Manchester City in the Round of 32, Atleti will be slight underdogs as they face compatriots Barcelona, though they have something to prove. Madrid had won three league titles in a row before surrendering their crown to Barcelona this season on points per game. This season also represents Atleti’s best ever Champions League performance regardless of the result against Barca.

For the first time in history, @AtletiFemenino ?⚪️ will be in the #UWCL quarter-finals after beating @ManCityWomen

A full house in an exciting game for the Colchoneras ??

Barca have something to prove after being thrashed by Lyon in last season’s final. In Carlone Graham Hansen, Lieke Martens and Asisat Oshoala, they have one of the most dangerous and well balanced attacks in Europe. Oshoala in particular has found her feet as a static centre-forward with Martens and Hansen providing the creativity from wide positions.

Barcelona’s is also the most settled squad of all the quarter-finalists, with very little turnover. Had UEFA maintained their initial prohibiting new signings from taking part in the last eight, Barca would’ve been in an even stronger position. Having avoided Lyon’s side of the draw, the Catalonians will fancy themselves for a second consecutive final.

Despite an historic round of 16 penalty shootout victory against Brondby, for Glasgow City, competing in this tournament has proved to be something of an ordeal. The Scottish season runs to a summer calendar, so they haven’t played competitively since the 2019 season ended in November. With teams in Scotland not allowed to train yet, there is little prospect of them being able to play any friendlies in the build-up to their quarter-final tie against Wolfsburg.

Glasgow City are the only semi-professional club left in the competition and have only been able to absorb the cost of COVID-19 testing for their players thanks to a charitable donation from a local entrepreneur named James Anderson. Their match against Wolfsburg is, unfortunately for Glasgow, likely to be a comfortable victory for the German side.

Wolfsburg have re-asserted their domestic dominance after a Bayern side containing Miedema, Evans, Maeir, Zinsberger and Schnaderbeck won consecutive Bundesliga titles in 2014-15 and 2015-16, with four consecutive league titles for Die Wölfinnen. Wolfsburg have very much established themselves as the second pre-eminent women’s team in Europe behind Lyon but they will back themselves as the strongest challengers after the French side.

In Alexandra Popp and Pernille Harder, they have a world class strike force. While they have lost Sara Björk Gunnarsdóttir, picking up Bayern defender Kathrin Hendrich to play alongside ex-Gunner Dominique Janssen in defence is a very smart pick-up. They will defeat Glasgow City convincingly and they can probably afford to use that game as a tune-up for the semi-final.

So what are Arsenal’s chances?
Well, it would be some feat to win the tournament but not entirely impossible. They will be slight favourites to beat PSG in the quarter-finals, but no more. Given that PSG have played competitive football more recently that might even tip the odds in their favour.

So in short, they have a coin toss tie in the quarter-finals and after that they would have to upset the odds twice to win the trophy. Arsenal can certainly compete against the likes of Lyon, Wolfsburg and Barcelona; but competing and winning are two different things. The Gunners lifting the trophy would be a surprise, but not one that would send absolute shockwaves through the women’s game.

Can’t wait! Thanks for the excellent overview.

Nice restrained optimism, Tim!
We certainly have the quality to compete at this level but my current concern is lack of preparation due to the covid circumstances. Our first competitive games for months and it’s straight in at the deep end with injury returnees and newbies!
Still it should sharpen our resolve for the Reading and Spuds games.