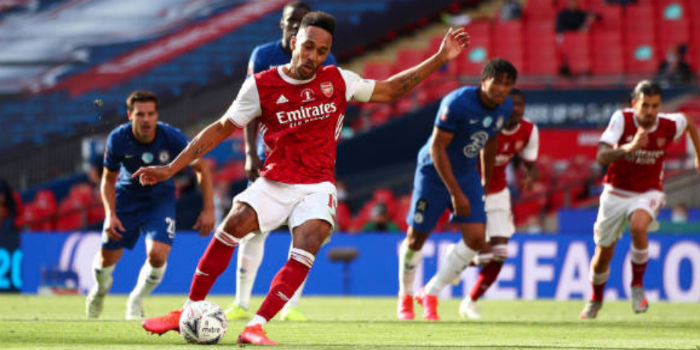 Mikel Arteta is optimistic that Arsenal can reach an agreement with captain Pierre-Emerick Aubameyang to extend his contract at the Emirates.

Speculation has circled about the striker’s future for more than a year but the Spaniard feels with the club moving in the right direction under his watch, that he has what he needs to persuade his main man to commit for the long-term.

The Gabon international underlined his importance to the Gunners at Wembley yesterday, netting twice as Arsenal beat Chelsea 2-1 to claim the FA Cup.

After the match, the boss was asked for an update on the 31-year-old’s contract situation and whether negotiations might reach a conclusion soon.

“I hope so,” he told his post-game press conference. “Everything is based on my conversations with him, how he sees his future, what I expect from him, the team that I want to build around him and the conversations I have with the people who are very influential around him.

“The club, we all respect and admire him, the players are all behind him. We know the players that we have and we have to value him. I think if we reach all of those points, we’ll make progress.”

On why he’s optimistic, he went on, “You asked me my opinion and that’s the feeling I get with conversations with him and his people, but obviously nothing is done yet and I want to enjoy the victory. Thanks to Auba again for the performance that he had and how much he helped the team.”

Aubameyang’s latest brace took his tally since joining Arsenal to 70 goals and 15 assists in 109 games; a quite extraordinary record. For Arteta it is further proof that he’s working with one of the best in the business.

“Big games require big moments from big players, and he’s delivered that in the semi-final [against Man City] and he’s done it again in the final.

“That’s why you ask about those players. Some were questioning that he couldn’t do it in big games. There we go. He was a big, big part of delivering this trophy. He’s done it and we are so proud to have a player like him in our squad.”

With the very short window between when the new season starts, we need to start making things happen ASAP. Hopefully Auba signs within the next 48hours

What I don’t understand is why, when we have the option of extending his current contract by an extra year under his existing agreement, we are not exercising it. I get we want players that want to be with us but he signed the co tract with that clause in it. We hold more cards than people think with Auba.

One year doesn’t add enough if you’re planning to build your squad around the guy.
There’s no point forcing him to stay

As much as I love Auba one year is probably pretty perfect. He’ll be 32 at the end of that.

A month a go I was open to the idea of selling him, as dumb as that makes me feel now. Not that I didn’t rate him obvs, just that I felt he was a luxury we don’t need right now. Now I am beginning to think he is the key to landing any player(s) we want this summer. We might not have Champs League, but there can’t be many midfielder and defenders who wouldn’t want to be in the same team as him. I know how easy it is to get carried away, and how stupid it would be,… Read more »

Class attracts class.
I think he will stay – he is 31 years old and £250k and a steady way to end your career in an exciting league with a club that has shown great improvements and with so many top class young players coming through is very appealing.
You go to Real or Barca and it doesn’t work out you are crucified..

You zee
Reply to  Leon

Then Ozil has to leave, which is not bad only if he refuses to

The view have changed dramatically. The view on Auba as a matter of selling to rebuild– is now lock him down and build around.

Not just you. Me too.

Desperately need Auba to sign a new contract.
Bring in Partey and Coutinho with a top class centre back and we have a very solid foundation to challenge for the top four.
Then do what Klopp did so well at Liverpool and buy the right players to fit the club and Arteta’s tactics and philosophy.
Arsenal played REALLY well last night and have shown that by beating the likes of Liverpool, Man City and Chelsea we can compete.
Arteta has done what Emery could not and installed a belief..
Brilliant…

I wouldn’t be waiting for a centre back – not with Luiz, Saliba, Mari all committed. And with Mustafi, Holding, Chambers, that’s our 6 centre backs for the season. We might even keep Sokratis at the club now for the Europa League games which makes sense.

Arteta said with mustafi’s injury he needs a center back so i think he’ll buy one.

CB is the absolute top priority. Arteta has been fairly explicit in saying Saliba will not be a quick fix. Luiz has been awful for us and Mari seems like a squad player. I think we’re going to spend fairly big on a CB.

I really do think we should just leave our attackers alone. A loan deal for Coutinho is ok, but otherwise I think we just having the perfect mix for the future.

Yeah I think the Europe League group stages will be another great opportunity to give game time to the likes of Nketiah, Martinelli, Nelson, Willock, and I’ve never seen him play but Matt Smith is apparently highly rated by Mikel. We’re well stocked in this area. That’s why I think the Europa qualification is essential, we can also now keep both Leno and Martinez (I would be sad to see either leave) and rotate them. Also game time for Saliba if he’s not ready for the league yet.

I get what you are saying and in an ideal world that would be the case , but time and balance will decide Laccazete is an asset that could aid a faster rebuild especially if balance calls for one of our current frontline to be benched. I would love for this frontline to remain but contract situation and age profile means there is action needed despite
them being low on the list of players we’d like to move. I think we have a from three that could rival pools I genuinely do but have too little quality behind them.

We do struggle against a low block, currently. If we sign Partey though and Saliba comes good then we can play an AMF and drop a CB.

I actually think Pepe has the tools for it. ESR might come good too. Seems like a lot of money to spend on ANOTHER attacking midfielder who (at the moment) would only fit into our ‘plan B’ game plan.

We don’t want Ozil 2.0 on our hands, even for a season. Especially not if Ozil is still here stealing a wage.

Plus 6m for our league position too

After the game when all the players were wearing shirts with the number 14 and ‘Always Forward’ printed on the back, I thought it was a like a ruse to help persuade Aubameyang to ‘sign da ting’, but then I realised it was because this was our 14th FA Cup win. Really hope he does sign and stay for the next 3 years. He’ll lose pace as he gets older but that’s fine we just play him as a number 9 instead of wide left. Ronaldo’s still doing it at 35 and a half years old. Something else I love… Read more »

I thought what in the emotional blackmail is this ?

Auba seems to have a poachers mentality. We get dismayed by some of his misses but he still has put himself into that position to get a shot off! Believe that even with the loss of speed, he will be an asset around the six yard box in the last year of his contract.

Don’t we have an additional year option on his contract ?
If there is an option like that then we should just keep him, we will hardly get anyone as good as him. I wanna see our 14 lift 15 next year. The summer should be more focussed on finding creative midfield players and move on the players we who can’t be a part of Arteta’s plans.

I know we have raul, edu in place but i would still love it to be Mikel’s decision at the end of the day and not some agent with his connections.

Yes we do. Exactly my thought mate

We don’t have an option on Auba, but his contract is valid until summer 2021. We won’t get a transfer fee for him, though, if we just let his contract end next summer without renewing it before.

He’s not deserved being held against his will. If he stays or leaves now he gets a better deal for himself, hence a decision has to be made this summer

Anyone noticed how Ceballos looks the most ready for a rebound in the picture for this post. Sign up the lad I say!

All very nice but we should be prepared if he does not commit. Again we have to stay away from emotion. 1) He is 31yrs into last season of contract 2) This is practically his last chance to seal a move to a club with CL to offer and for him to win medals at the highest level. 3) He will probably fetch us the most money at this point and we will need the coffers to rebuild midfield certain other key areas. The cons of course would be question mark as to who will take up the goal scoring… Read more »

Thank god there’s now a ‘read more’ button to hide most of this wall of text.