‘I wasn’t in the best place, I needed the break’ Leah Williamson on her injury return

When Beth Mead arrived at Arsenal in 2017 she was one of the foremost emerging centre-forwards in England, having scored an incredible 77 goals in 78 games at Sunderland, where she won the WSL Golden Boot in 2015 despite playing for one of the division’s lesser lights. Arsenal tried to sign Mead a few times before she joined the club because she wanted to finish her studies in the northeast.

By the time she did arrive at Arsenal, Jodie Taylor was on-board for a short-term stint in North London while she awaited her Green Card. In the summer of 2017, the Gunners then signed Vivianne Miedema. As a result, Mead was recast as a wide forward, a move that became enshrined when Danielle Carter ruptured her anterior cruciate ligament for the first time in May 2018.

Beth started 12 of Arsenal’s 16 WSL games last season and all of the club’s Champions League games. On the opening game of the season against West Ham in September, Vivianne Miedema was rested and Mead rotated the number 9 role with Danielle van de Donk. In November, when Miedema was rested again for a Conti Cup group stage tie with Brighton, Mead started as a wide-forward with Jill Roord fielded as a false 9.

The Arsenal striker smacks the ball across goal and into the far corner from 20 yards.

Mead forced her way into Phil Neville’s England side in early 2019 as a wide forward and she has entirely settled into that position, to the extent that she is not really considered as a central striker option even when Miedema is not available. The signing of Caitlin Foord, who can operate as a centre-forward, has cemented Beth into her new position.

So there is a degree of irony that in this coming season, Beth has opted to take the number 9 shirt. She has developed qualities that Joe Montemurro really values as a wide-forward, which goes some way to explaining why she managed just a shade under 2,000 minutes last season- a total she would have exceeded were it not for injury.

Mead and van de Donk flanking Miedema has been Arsenal’s front three for over ¾ of their games this season. [In reality, the front three are very fluid but I will continue to describe Beth and DvD as ‘wide-forwards’ for ease of reference]. Beth had 0.55 goal contributions per 90- comparable with van de Donk on the opposite flank at 0.61 goal contributions. She averaged 0.24 goals per game from an XG of 0.21.

She marginally overperforms her XG, not quite as emphatically as some of her attacking teammates but this is explicable- unerring accuracy is not really Beth’s role. Arsenal are a possession side that aim to thread the eye of the needle. Mead offers jeopardy and variety and her data demonstrates that. Her biggest development in her time as a wide-forward has been in her her creative game.

“I really enjoy playing on the wing, I’ve become an assister rather than a goal scorer, but I know I need to score more,” she told me in February 2019. Mead registered 0.32 assists per 90 this season, only bettered by Miedema at Arsenal. She also registers 2.29 key passes per game, which is second only to Miedma. 0.95 of those are from set-pieces and this is another big development in her game.

That 0.95 average is way ahead of anyone else in the team, with Kim Little managing 0.22 key passes from set-pieces per 90. Mead has developed a really pleasing delivery style from dead balls, striking across the ball with her laces which makes her deliveries difficult to defend. Arsenal also take a lot of short corners from which they have scored a few goals this season, started by her, like the picture-book goal against Reading in December.

Beauty of a volley for @liawaelti@bmeado9 with the assist
2-0 @ArsenalWFC pic.twitter.com/7XlbTlnmIG

If you subtract dead balls, Beth’s creative numbers remain solid, making 1.34 key passes per 90 from open play, comparable with other wide players Lisa Evans [1.37] and van de Donk [1.41]. She completes 1.74 passes into the box per game less set-pieces [3.24 with] and only DvD and Lisa Evans have more in the Arsenal squad. Mead attempts 0.40 through balls per game, only Miedema [0.45] attempts more than that.

Kim Little, Jordan Nobbs, Danielle van de Donk and even Vivianne Miedema could all argue that they are number 10s, essentially. Mead offers something different to the overall precision-based approach. Her XG per shot is 0.09 [lower than Miedema, van de Donk, Little, Evans, Nobbs, Roord and even Leonie Maier]. Mead takes long-range shots in a team that usually looks to thread the eye of the needle.

Beth takes 2.37 shots per game, below only Viv and Jordan. Her 10% conversion rate is low because she takes on longer range shots. 33% are on target and that is a good rate given the distance of her shots. Mead is pretty much the only player that regularly shoots from range and that variety is favourable to make the attack less predictable and to move defenders around. 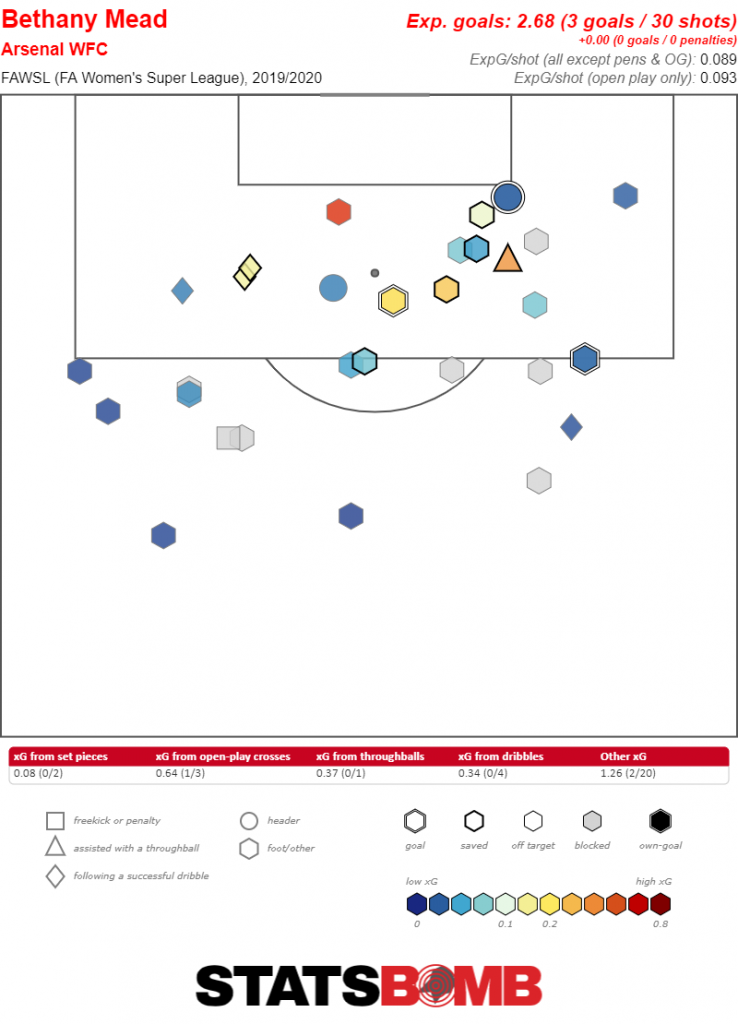 Mead is also Arsenal’s most prominent dribbler by some distance, she attempts 3.56 dribbles per 90, the second most prolific dribbler in the squad is Kim Little with 2.72. Beth is successful with 1.58 of those but she draws 2.77 fouls per game. Again, accuracy does not really illustrate Beth’s value, dribbling provides variety and unsettles defences, pulling them out of position.

It is a high-risk low reward activity but an essential one- much like long-range shooting. Mead’s role is to provide that sense of chaos. She draws more fouls than any other Arsenal player as a result, essentially manufacturing her own work as the set-piece taker.

Mead also provides excellent value off the ball. A couple of weeks ago I wrote about Danielle van de Donk’s value in the first line of the press. Beth provides equal value in this respect. Her 19.13 pressures per 90 are only bettered by Jill Roord and DvD. She makes 4.82 regains per 90, only Lia Wälti manages more [a ‘regain’ is defined as a player winning the ball back within 5 seconds of applying pressure].

Her 2.21 tackles per game registers much higher than any other attacker [Little 1.91, Evans 1.87, DvD 1.59, Nobbs 1.47]. When you toss interceptions into the mix that’s 2.69 tackles and interceptions per 90, the exact same number as van de Donk. Miedema, DvD and Beth are all excellent at applying pressure on teams when they play out from the back and forcing turnovers.

Joe values Beth so much because she provides variety in the Gunners front line. She dribbles, she shoots and she presses opponents. In an intricate team, Mead provides brute force. Picking the lock is good but sometimes you need to kick down the door. She will face increased competition this season with the arrival of Caitlin Foord and with the signings of Noelle Maritz and Steph Catley freeing Evans and McCabe up to move into the wide-forward positions. That will be a new challenge for Beth and one she will relish.

Another interesting one, Tim. Really useful to see the stats. For example, I knew she was the dead ball and dribble queen but I hadn’t really noticed her regains.

We had certainly noticed the number of times she gets hacked down on those dribbles! No surprise she misses a few games with foot and leg injuries.

Next year will be really interesting for Beth and what her role will be in the team. Goals from wide areas were obviously a problem last year. For me curiously Beths best game last year was the first half against West Ham, when she was a striker. It would be interesting to see if she benefits from playing with more natural winger on the other side. For England she plays with Parris who is the one who keeps width and she can be inside foward. I may remember wrong, but I think her best period for Arsenal was 2019 spring… Read more »

Yes and I think with Maritz and Catley here we’ll see more of Katie and Lisa on the wings, Caitlin too. Beth will have a lot more competition.

Good. I think we need a fair bit more pace and directness in attack after the last 2 seasons of being pounded by Chelsea in big games.Katie and Lisa provide that.

I think Joe has got Arsenal playing to comfortable passing and doing lot s of beautiful things that aren’t effective at the top level at times and predictable.The likes of Beth would benefit from more than one target up front.

Agree that needed more pace/power and variety (besides Katie and Lisa I think that Caitlin will have huge role in that). Don’t agree on being pounded by Chelsea because our playstyle. We outplayed them in February with bare squad, only finishing quality and backup CB options cost us. Our widefowards have plenty of options to aim at. Viv and collection of 10s in Kim, Jordan, DvD is the best in the league, and these central attacking players have more endproduct and quality than any other team.I would like to see Beth as inside foward or second striker for couple of… Read more »

Yeah, agree it’s not really accurate to say there’s one target up top considering how much time Nobbs, DvD, Little spend inside the box and how much time Miedema spends outside of it. Arsenal score a lot in transition too by pressing opponents which often goes unnoticed, they’re not a one dimensional team. That said, definitely more options in attack were required and let’s not forget that Caitlin hasn’t made her WSL debut yet.

Must be the northern grit! How Beth has got up and carried on after some of the GBH tackles she took last term was amazing. The assault by Hemp in the Conti Cup semi was particularly brutal.

‘I wasn’t in the best place, I needed the break’ Leah Williamson on her injury return