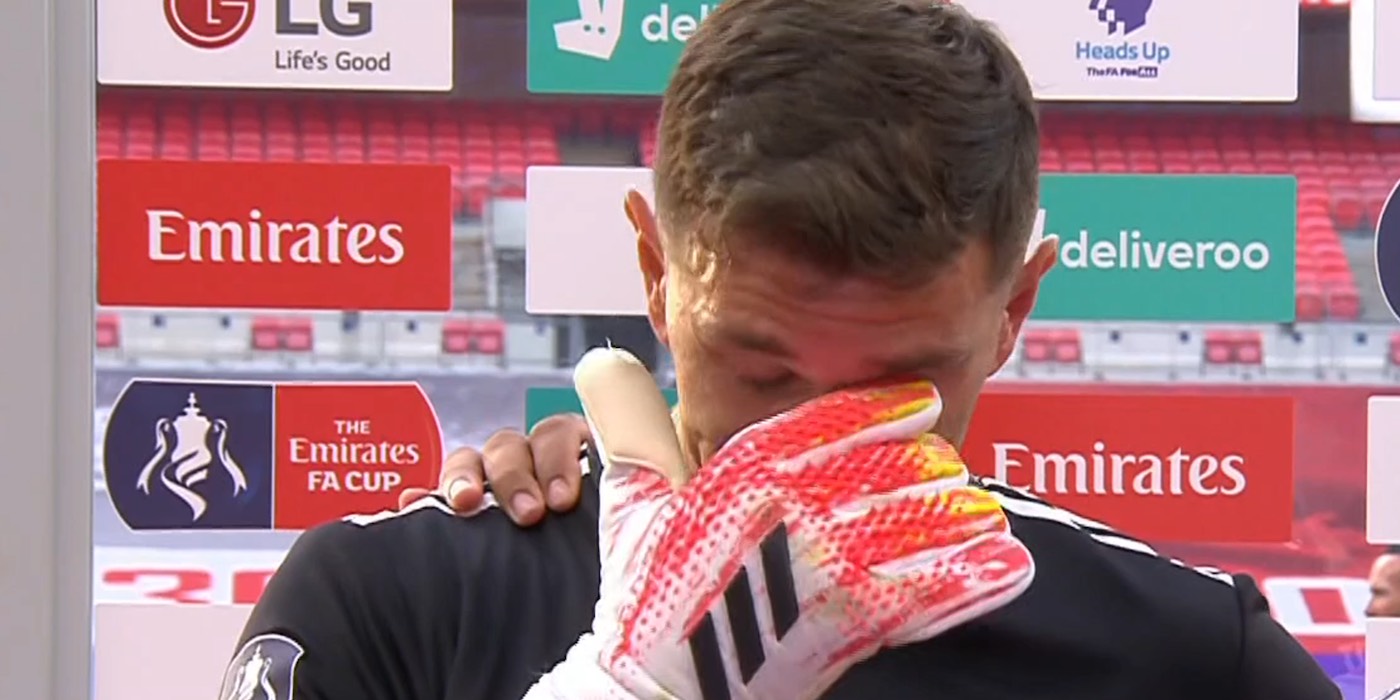 FA Cup winning goalkeeper Emi Martinez says that the players are determined to give Arsenal fans more after a disappointing season in general, but hopes they’re proud after the 2-1 win over Chelsea.

The 27 year old’s career progression has been far from easy, but he was an assured presence between the sticks at Wembley yesterday, capping what has been a fantastic run in the team following Bernd Leno’s injury against Brighton.

He was beaten by Christian Pulisic early on, but as the pressure mounted he commanded his area and made an important, brave save late on to keep the Gunners in front.

Speaking to the official site afterwards, he praised the team for what they gave and said, “You can see how we fight for the manager, we fight for ourselves and for our families.

“I think we made the Arsenal fans really proud today. Obviously they deserve a lot more from us, especially in the Premier League and in Europe, but we had a bad season in the Prem but we still won a trophy.

“We want them to be happy.”

Martinez was emotional after the game, breaking down in tears on BBC in his post-match interview, overcome with the significance of the occasion after 10 years in North London.

Those were emotions shared by his family back home in Argentina, and he sounded rightly pleased with the job he’s done in the team over the last few weeks.

“I felt really confident even before the game and in the semi final and all the way through in the FA Cup,” he said.

“That’s what I do best, I work hard and everyone says when you work hard you get your rewards and I think I did that today.

“I’ve worked really hard at the club for 10 years for opportunities like this. I couldn’t be prouder.”

Arteta: It wasn’t in my plans to sell Emi Martinez

If I saw it correctly, on that tunnel cam, one of the staff says something to Martinez (probably about earning himself a big pay day) as he’s entering the dressing room and he retorts, “It’s not about the money.” Perhaps I misread the situation entirely, but his performance and tears and camaraderie with his teammates will stick with me from this game.

I noticed this as well! Apparently he is on very low wages compared to even some of the younger members of the squad, but he was not interested in any of that at the time! What a man, what a goalie, I really hope we keep him and let him battle it out with Leno and split EPL, Europa, and cup competitions. We want 2 strong rotational players for every position, so why not our GK as well.

Arsenal Arsenals number one ! I love Bernd hes brilliant but Emi seeps Red and white !!! What a keeper
what a man !!

Well done team. Will leno get back in the team – Emi is almost undroppable. Our most calm assured presence at the back since Seaman. Well done that man.

Leno was equally undroppable before the injury. Let’s be thankful we’ve got two great keepers; I know one of them will leave… maybe the head keeps Leno, but the heart roots for Martinez and his story. At the end of the day, whichever is number 1 next season I am happy.

Don’t cry for me Emi Martinez
The truth is I never left you.

I can’t tell you how refreshing it is to see Arsenal be able to grind out defensive performances again. It’s been years. Well done Mikel.

He deserves it as much as anyone! What a great lad, and outstanding goalkeeper

Genuinely almost started blubbing myself. Felt for the guy, all that emotion coming out after such a long slog to where he is.

A great keeper, as proven when he’s had his chance. Think he should be our No. 1 next season, for sure.

After years of perseverance for him to get this moment… I’m a grown ass man and every time I see Emi celebrate I get so weepy. Well done no.1 you earned that medal and your place.

I will just finish the sentence for you if you please. …Well done no. 1 you earned that medal and your place (in our hearts).

I really like him, he showed his intent from the moment he came on to replace Leno. I don’t know if the stats confirm this, but from what I have seen of Emi he catches more crosses and high balls then Bernd. I know he has played a lot less games, just wonder if this has meant we have been giving opponents less shooting chances?

Really pleased from him on a personal level, he has clearly worked really hard with little recognition for quite a few years.

Also, most of the time he catches it cleanly. There is one aspect he is yet to be tested as much as Leno did, close range reaction saves. That’s something Leno excelled at. Time will tell i guess. But if his other abilities results in less close range shots, I will take that.

Well, now we know for sure that we have two excellent keepers for handling four competitions next season.

What a great situation to be in after the season we’ve just had.

I loved his passion.Maybe Leno isnt just a No.1?.

To shed tears for your club, is a beautiful thing. What a great player and what a wonderful human being this guy is.

Remember Arsene used to say “we have 3 great goalkeepers”. #wengerknows.

Been an Argentina fan ever since I started reading about football (Yes, hated Bergkamp with everything I could for that wonder goal in 1998. I didn’t even know Arsenal existed back then) . So long since they had a decent goalkeeper. Hope Emi makes it. That’s another positive I would take from his recent performances.

Isn’t there a club side in Argentina in the top division called Arsenal?

Arsenal de Sarandi!
Actually, when we first approached him, that’s who Emi thought was calling!!

remember that match that fabianski started one game because szczesny got injured the game before, but had to come out injured for manonne, who finished the game with a shoulder problem? remember when lehmann had to come out from retirement to help us? now, remember bernd’s saves against tottenham? and have you seen this kid for the last month? i can’t remember the last time i felt this confident about our keeper, let alone about the two of them!! what a time to be alive!! (props to cech, one of the finest keepers this club has ever seen, who also… Read more »

I don’t know who started the “Fabianski moment” thing, but it’s bollocks.
Watch it again. He obviously knows where he is, where the line is and what he has to do to make sure the ball is legal.
Bloody good work, as was everything else he did.

Totally agree. Assured goalkeeping at its best. This guy is fast becoming a legend. I live in Reading and they loved him here.

it was risky and unnecessary, 10 cm and he’d have given a free kick and gotten a yellow. it worked and everything’s fine, but he could’ve catched it anyway without it having to be so so close to the line, because a little miscalculation could’ve costed us the match.

How can you not be romantic about this sport? 10 years, 6 loans… I’ve said this in a previous post, but Martinez typifies the kind of spirit I want to see infused into this club. He’s clearly a special character. Pleased for him as I am for the team.

Gotta admit. I teared watching Emi yest. No idea why.

This guy is real class. His humility and pride is a rare thing . All Arsenal players should look to him as an example of what we as fans want to see from our players. A great guy a superb keeper and a breath of fresh air in the modern game. Hope we keep him..

He’s better with his feet than Leno so might be the number one from now. Arteta likes and requires a tekkers keeper. Lucky to have them both, but it could be a cruel situation where one might be sacrificed for money in the summer for a rebuild.

He’s been pretty good. Possibly good enough to remain first choice but I’m old enough to remember Alex Manniger looking like the greatest goalie ever in a similar scenario but we soon found his level with time . I suppose we’ll only find out how good he is by playing him . Wouldn’t be selling Leno though

Give that man a pay rise!! Big up Emi, enjoy the moment, you truly deserve it!!