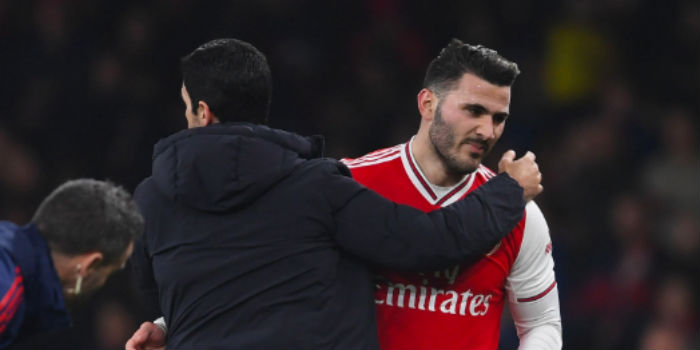 According to Bild, Sead Kolasinac is so keen to return to former club Schalke that he’ll accept a significant pay cut to make the move happen.

Under contract until 2022, the Bosnian left-back is thought to be surplus to requirements at Arsenal with Kieran Tierney and Ainsley Maitland-Niles both capable of playing on the left of defence.

We reported the other day that Schalke wouldn’t mind taking him on loan for the season but that he currently earns far more they can afford. Having signed for the Gunners as a free agent back in 2017, he’s said to be £100,000 a week. Possibly even more than that.

For some context, Schalke’s finances are in a real mess. Prior to Covid-19 they had amassed significant debts and that situation has only gotten worse.

In June, billionaire chairman Clemens Toennies resigned and Munich-based publication Sueddeutsche Zeitung claimed the club would introduce a salary cap of 2.5 million euros for next season. They also had to take a €40 million loan from the state of North Rhine-Westphalia just to secure the club’s short-term survival.

So…yes, Kolasinac would need to take a huge salary cut to move to Schalke or they’d have to rely on the generosity of the Gunners who’d have to massively subsidise his wages if a loan move were to be agreed.

The latter doesn’t seem particularly likely. Indeed, for a potentially very small saving, you’d probably rather have Kolasinac in and around the squad. It’s not like he’s throttling the development of any youngsters coming through the ranks and he could be useful in cup competitions.

We’re in no rush to get deals done so you’d expect Kolasinac to start the season as a Gunner.

Deep respect and admiration for this man. Always professional, at times looked like a rugby player combining pace and power down the left. Attacked a mugger.

Sadly not quite up to the level we needed at the club but has definitely been a welcome addition to the list of mad yet endearing full backs we’ve had over the years (come on you gays!).

We should get a template made up.

I’ve forgotten one. Oh yes. Got it.

Salibaba and the Forty Thieves
Reply to  Qwaliteee

We shouldn’t rush to sell Kolasinac. Especially if it’s for any deal that may not suit Arsenal’s current financial situation. Tierney can start and Kola can be a good squad player, behind Maitland-Niles (if he stays).

He might play less though, regardless of a back three / four, especially if / when Gabriel comes in and when Saliba comes good.

Arsenal should shove the ball in Kola’s court, firmly.

I feel like we have enough players in the squad who can at a pinch deputise for Tierney, that chances are there will always be at least 1 available to do that. AMN, Saka, Cedric can play there at different levels of quality. Maybe an academy LB could fill in short term too. Not a perfect situation but not totally reckless either

At £100k+ pw, and with the other options we have, he’s on way too much to just be a dedicated backup. The worst outcome for our current financial situation would be to keep him

Yeah, I make him 4th choice LWB behind Tierney, Saka & AMN and 4th choice LCB behind Gabriel (if/when), Mari and Tierney. Not to mention at a push you could play a RCB on that side if you had to.

No, we should rush.

Rush like that mad dash to the loo when you’re busting for a leak.

I gave a thumb up just for your name, not for the post

We really need a specialist expert in the mastery of selling players at Arsenal.

I’m sure that the backroom team are doing their best but it’s a “difficult” market and, more tellingly, many of the players we want to offload (and there are reportedly a dozen or so) clearly aren’t wanted by other clubs – or at least not on the terms we appear to have set. That said, there’s still about five weeks in the window so let’s see what happens.

I think the whole ‘clubs don’t want our players’ thing is completely overstated. There are literally thousands of clubs out there. Plenty of them have money and plenty of them would do very well out of signing a Sokritis or a Mustafi. We tend to over egg the flaws of our players and then decide that nobody else will want them because they are not Aubamayang. The bottom line is that even our weaker players are still very good footballers who have just contributed to a trophy winning season. It’s fair that we set our prices high at the beginning… Read more »

Possibly, but wages will undoubtedly be an issue here. If only Man City wanted him 🙂

I agree. One man’s rubbish is another man’s treasure.

Lower division clubs might be interested in the deadwood; we might not get in the amounts we may have initially wanted but it’s now getting to be an urgent (and mildly embarrassing) case of trimming this squad down – and zzzzzz yes, bringing some money in ?zzzzzzzzzzz

Hasn’t been a great success for us but solid enough. Stay or go, not v excited either way.

One way tickets to wherever the deadwood want to go.

Kinda like Kola as a player, probably our most physical player with body of a tank.

I have a feeling that Kolasinac was a training boxer before professional football. His stature and jaw line (especially) resemble that of a boxer.

It seems like we are seriously favouring loan deals at the minute..Both Him and Holding going out on loans, Part of me is like cool as I think Holding has a future at the club, but at same time it’s worrying we not getting much money in to strengthen the squad..

That’s probably because we can’t sell these players (for whatever reason) for an “acceptable” fee. At least loan deals usually get the wages off the books which is something. Prices are generally depressed so I think we’ll probably have to compromise on many fees to get most deals done. There’s still about five weeks left I think so time will tell.

Jeezuz, Torreira and Douzi are the only two midfielders that I think are worth keeping! I think a marquee signing is overly-optimistic. It would make more sense to take a good player with something to prove on loan (a-la Ceballos), rather than fork out for another permanent deal when we have talent (Torreira, Guendouzi, Ainsley) being neglected to butcher our team with Xhaka. Is Partey gonna paper over Xhaka’s cracks? If so, enough to justify losing the talent mentioned?

It’s crazy that even the free transfer of a 24 year old who was in the Bundesliga team of the year becomes a bad, costly signing because we paid him almost double what any other club would be willing to offer

We need to stop doing that!

We need Kolasinac because of travelling on Thursdays for Europa matches…..

Arsenal are no different from many other clubs. The market is awash with footballers clubs want off their books for financial reasons. Most clubs are looking to economise & looking for loan deals as they don’t have the income to buy. That’s while Özil is sitting tight.

Mate, Mesut Ozil probably no longer gives a fuck – and I can’t say I blame him – because this useless crap board haven’t given a fuck.

No. Özil is ‘sitting tight’ because he has lost all interest in playing football. I predict that, he will announce his retirement from football once his Arsenal contract comes to an end. Watch this space!

Hope this happens. Along with Elneny, he’s the only player I actually dislike. He offers nothing. Get rid!

Another one going, another few quid in the coffers.

Take cover, Stan will be firing those Colt 45 peacemakers all over the place.

Yes-Sir-ree, partners. Anyone for more coffee and beans?

Much respect to Kola for foregoing some extra cash just so he can do what he loves to do best. No matter what anyone thinks of his ability as a footballer, by taking this move, he has shown he has self respect, believes in his ability and really loves and wants to play football.

Compare to another superstar who is happy not even featuring on matchday sheet as long as he is pocketing the dough. Yet, tries to convince anyone who cares to listen that “Football is my life, I love playing football”.

arseblog
Admin
Reply to  A P

Massive respect for him if he is willing to take a pay cut in order to play regularly. Maybe he should have a word with his mate Ozil about how good it feels to play regularly rather cooling the heels.

Frankly its either him or AMN

If we get a decent price for Kola, we should sell.

BUT we should keep Bellerin (at least for one more season) with Cedric the alternate on right.

Which means Tierney with AMN (inverted) on left. he’s been playing fullback for 4 seasons now and its his ‘natural position’.

Why oh why do the arsenal management always decide to sell young players just as they show some real talent , Maitland niles man of the match in charity shield and someone who works his butt off even when he is played out of his favoured position.

We’re not selling him.

Great news. He’s been errr, useful when called up but that’s about it. So thanks @big man Kolasinac!