THE LOWDOWN
Arsenal take on Sp*rs in the FA Cup on Saturday evening in what is, confusingly, last season’s FA Cup quarter-final. The original game was due to take place in March before the coronavirus pandemic intervened. The winner of this tie will play away at the winner of Leicester City v Manchester City in the semi-final on Wednesday evening.

Having lost the Conti Cup Final in February and the Champions League quarter-final against PSG in August, Arsenal have unhappy recent experiences with cup football. This is a unique opportunity to put silverware on the sideboard as early as October. This is also the first of three home North London derbies across the three domestic trophies in the next eight weeks.

With the international break in the rearview mirror, we are likely to see some measure of rotation with the prospect of three games in a week for Arsenal. Montemurro left the side unchanged for the resounding WSL victories over Reading and West Ham with the likes of Lisa Evans, Danielle van de Donk, Caitlin Foord and Leonie Maier all chomping at the bit to start having started the last two matches on the bench.

TEAM NEWS
As reported by Arseblog News earlier this week, Leah Williamson is fit to play after pulling out of England’s training games during the international break. Jill Roord will not be available after injuring her knee on international duty with the injury likely to keep her out for weeks but not months.

Steph Catley didn’t appear in the training photos posted on Friday after going off with a bang to the head against West Ham. Jen Beattie should join full training next week after a back injury which she had a small procedure on. Lydia Williams is due to join full training at the end of the month following an ankle injury. Lotte Wubben-Moy is in line to make her debut after signing from the University of North Carolina on deadline day.

LAST TIME OUT
The teams met in the FA Cup at Meadow Park in 2017 and the Gunners ran out 10-0 winners thanks to goals from *deep breath* a Danielle van de Donk hat-trick, two goals from Dan Carter, Beth Mead, Chloe Kelly, Kim Little, Dominique Janssen and Katie McCabe. The home match between these sides wasn’t played in the WSL last season due to the cancellation of the season, but the Gunners were 2-0 winners at whatever Tottenham’s stadium is called back in November, with goals from Kim Little and Vivianne Miedema.

THE OPPOSITION
Spurs have yet to score a goal against Arsenal in their competitive meetings, let alone get a result. They are a club on the up, however. When the Gunners pummelled them 10-0 in the FA Cup in 2017, Tottenham were a third tier club. Now they are a competitive WSL side with genuine mid-table aspirations. They have also added experienced players like Rachel Williams and Kerys Harrop from Birmingham this summer.

The signing everyone is talking about is Alex Morgan, who joins on loan from Orlando Pride until the end of December. Morgan has not played since last August having given birth to her daughter earlier this year and with the NWSL in the US still in a state of uncertainty, Morgan has joined the temporary US influx into the WSL. Only Gareth Bale has sold more personalised shirts on the Spurs website in the last fortnight. We are told she will be eligible to play in this game.

?? A behind-the-scenes look at @alexmorgan13's first day as a Spurs player at Hotspur Way!#WelcomeAlex ⚪ #COYS pic.twitter.com/qsMdjwQEQx

PLAYER TO WATCH
With three assists and a goal in her first two games, Beth Mead has started the season very strongly. Playing predominantly on the right side of the attack, Beth has always been valued for her willingness to take high risk actions like dribbling and long range shooting in a team of technocrats. This season, so far, she has gone up another level in terms of her creative game.

Starting very wide, Mead stretches teams and adds width to the attack but her grounding as a striker means she also has a good instinct for when to run in between the opposing full-back and centre-half- as she demonstrated with her goal against West Ham. Against the Irons, Arsenal hit Mead early and often on the right hand side to create space in the area for the likes of Miedema, Roord and Nobbs to run into the area. Beth has been one of Arsenal’s strongest performers in the first two games.

This is very satisfying. 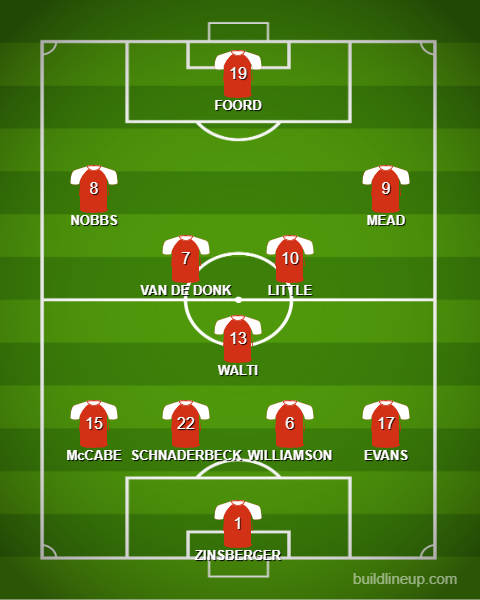 HOW TO CATCH THE GAME
The match kicks off at 5.15pm on Saturday evening and, in the UK, it will be shown on the BBC Two. Outside of the UK, the game will be streamed live on the FA Player app, which is free to download.

COMING UP
We will have match reaction from manager Joe Montemurro on the site on Saturday evening. We will also have the usual build-up and reaction to all of the upcoming games. In case you missed out, we also spoke to Joe about the signing of Lotte Wubben-Moy earlier this week.

Previous articleArteta on transfers: *SPOILER* – There is no information in this article
Next articleArteta: We have to be at our best against Liverpool

One comment, she had a daughter, Charlie, not a son…

Yes, you’re right, I was getting confused with HAO! Now corrected.

COYG! Any particular reason you don’t think Miedema will start, Tim? I haven’t had a chance to catch a Ladies’ game since the restart.

Just a guess, but I think there will be rotation. Foord has 3 assists and a goal off the bench in under 45 minutes of play this season and there are four games in the next fortnight if we win this one. She also played in Russia last week.

Well you managed to confuse me, Tim! You say Steph didn’t train following a bang on the suede at the Hammers last week and that Lotte is in line for a starting debut but your predicted line-up has Steph in at left back and Viki and as a centre back.

I’d like to see DvD and Jordan swap places too if they both start. I don’t think Jordan gets in the game as much as she should from a wide position whereas DvD will with her trademark tenacity.

Steph wasn’t in any of the training pics, which didn’t come to light until after I’d prepared the graphic. Yes, Lotte is in line for her debut, doesn’t mean she’ll definitely start.

Is there a Spud still in their squad from the 10-0 3 years ago?
I still can’t see us losing but the gap gets narrower. The day out at the Toilet Bowl last season was immense but in the first half Spuds put a high press in on our CB’s and Lia and it did cause us some awkward moments. Another 2-0 will do nicely.

Smash them chickens ladies. Up Gunners

Thanks, Tim
Such a shame Jill Roord won’t be able to continue her hot streak. Hope she’s back for Chelsea league game. I do hope you’re right about Foord starting – she has more than earned it.
This is where you see how strong our squad is. Three starting players injured and we can still field a great 11 and leave players like Miedema on the bench.
Good luck later on, girls. Remember, a cannon will always be cooler than a chicken.