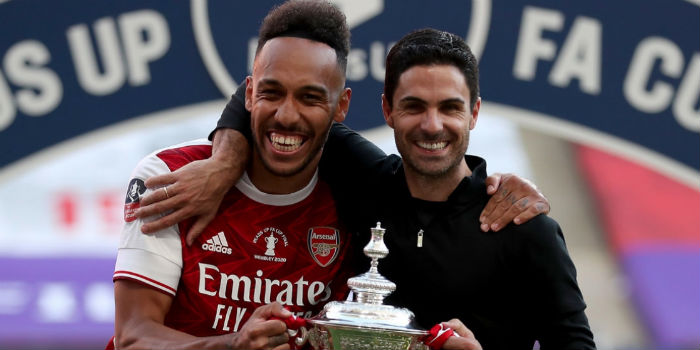 Arsenal may not have announced a contract extension for captain Pierre-Emerick Aubameyang but manager Mikel Arteta insists they needn’t lose any sleep over the matter.

The Gabon international, scorer of 71 goals in 110 games since signing from Borussia Dortmund in 2018, is understood to have agreed terms on a two-year deal that will see his pay bumped up significantly.

Despite negotiations dragging on for most of the year, Arteta hinted that a positive resolution is very close.

Asked for an update ahead of his side’s season opener with Fulham, the boss said: “I can say that I am even more confident than I was at the end of last season when you asked me the same question 10 times. I am very optimistic.”

While a portion of the Arsenal fanbase has made a sport out of being impatient, the boss was quick to quell any residing worries that his main striker might have a late change of heart.

“I think they [the fans] can be pretty relaxed,” he said.

Good news, but even better if we could get it done and dusted just before, or on, the season’s opener.

Doubt they’re going to announce it today now. Would’ve been a great boost before the new season properly started

Chamakh my pitch up

In the new era of stupid videos etc to announce new signings, I would love it if Auba scored and revealed that he had signed the deal on a t-shirt underneath the kit.

Appels&Pere
Reply to  Chamakh my pitch up

David C
Reply to  Chamakh my pitch up

After his first goal or his third of the game? ?

Steve Morrow’s fractured ulnar
Reply to  Chamakh my pitch up

Or brought back the mask celebration thing except this time it’s the mask of Kia Joorabchian and he signs the contract pitch side.

This is the best possible signing this summer

What’s Christopher Samba up to these days

I fear they’re just holding it back to soften the blow of failing to bring in a big signing (cough, Partey, cough, Aouar)

Reports suggest (for what they’re worth) that efforts to sign Aouar are being stepped up. A break on that developing further/faster seems to be the lack of any movement in transfers out, although Martinez could be Villa-bound.

As much as I would like to see those two at Arsenal, Aubameyang is far more important right now. Where would be without his goals? Imagine if the announcement was that Partey and Aouar were arriving but Aubameyang was leaving–that would be terrible news.

Honestly, haven’t been worried for over a month now. COYG!